Nobody Kicks Ass Without Tanker Gas

RUSH: Mr. Snerdley said, “How did you get in there? How do you get to Kabul in Afghanistan?” Well, you know, I wanted to fly EIB One straight in there but you can’t do that. It’s still considered a war zone. There are really no commercial airports. I mean, there is a commercial airport in Kabul, but basically is run by the coalition forces. It is essentially a military base. Afghanistan used to have a couple airlines that do come in and out of there. If you think flying commercial in this country is a task — and it is; I mean, there’s no question — you ought to see what Afghanis have to do to get on one of their commercial flights. They actually stand outside in like a fenced cage with no top to it. They stand outside for hours before they’re even up to the ticket counter which is also outside, and then they wait outside because the terminal has totally been taken over by coalition forces which is run by a three-star colonel from Turkey, who I met. He’s one of the most extraordinary men that I have ever met in my life. Kazim Ondul is his name, and we had a little chance to talk with him while one of our flights out of there was late. He gave us a conference room and served us some Turkish coffee. He’s a brilliant politician, but he’s a great man, fun to talk to. A very young guy, he has chosen this as his career, loves America, loves everything about it. He told about taking his kids to Disney World in Orlando. It was really eye opening. Anyway the way you get in there, they wouldn’t let me take EIB One in there — and, frankly, we didn’t want to take it in there because when I first met with government officials who gave me the low-down on how you get in and I ran the question of my EIB One going in…
“Well, you actually don’t want to do that. What you do, you go to do you buy and from there you take a UN plane in.” I said, “Oh, that’s wonderful, a UN plane? What kind is it?” They said, “It’s an Ilyushin.” I said, “That’s a Russian prop jet!” They said, “You can’t go in in jets because jets provide a heat signature for anybody that might want to fire a surface-to-air missile.” When’s the last time that happened? “Oh, it’s been a long time. That hasn’t happened since October 2003.” So we fly this rusting Ilyushin in there? “Yeah, you go in at altitude and you corkscrew down for the landing so as to not present a big target to anybody that might to want take a shot. I said, “When’s the last time one of these planes was shot, shot at?” “As I said, October 2003.” “Okay, we’ll do that, an Ilyushin. UN, huh?” Yep, UN plane. Humanitarian Airlines or some such thing is what it’s called. So I went and look although Russian Ilyushin, and you wouldn’t want to get on one. None of us would want to get on a Russian Ilyushin. Anyway it turned out to be not a Russian Ilyushin. It was an American DC9. So I said, “Wait a minute! Hey, hey, hey, pals. This is a jet. This has got a heat signature that a Stinger surface-to-air missile could hit.” “Well, no, that doesn’t happen.” They changed their tune on that. “That doesn’t happen. We’re not worried about that. Jets are going into Kabul.” Okay, what about mine? “Well, you don’t want to do that. No overflights of Iranian airspace.” So the way you do this, you leave — and it’s the same way coming out of there — you leave Dubai and you fly down the Persian Gulf and around Iran, and you go way south, then you turn up toward Pakistan and you actually go Kabul from the west. It’s about 3-1/2 hours. In a jet it’s 1500 miles.

If you could go straight there from Dubai over Iran, you could do this in an hour, maybe an hour and a half — and coming out is the same thing. We didn’t come out on the UN plane. There was an Army general from Bagram Air Force Base coming out so we hitched a ride with him on his Citation. We actually had so much baggage. There were six us. A Citation 5, it holds maybe six people as you see, but it’s not intended for people that got a week’s worth of luggage with them. I thought, “We’re going to have to strap this on top of the airplane and make it look like we’re a bus,” but no, they managed to get all the luggage in there. We were sardined in there, but it was about 3-1/2 hours back to Kabul, then aboard EIB One and back. The total trip time was 23 hours. So left there at, it was local time ten o’clock… No, that’s not when. I’ve got to count backwards. I got back at ten p.m. on that night. So whatever, 23 hours back plus the time change of 9-1/2 hours is what it was. Anyway, we just had one experience after another that just confirmed how fortunate we all are to live in this country — and I’ll tell you what: How, also, fortunate we are that we have Americans who volunteer to go over there and to do the work that they’re doing. I got a funny note here from a guy who flew tankers in the original invasion of Iraq. Remember that crew that flew an American flag in five different aircraft and sent me that flag with plaques and so forth that blew me away? 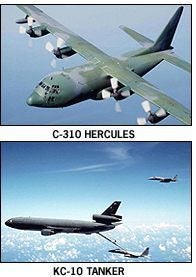 I’ve stayed in touch with these guys since that happened, and I got a note here: “Sir, welcome home from your trip. I see from your website you made a whole new host of friends even if they are Herc pilots.” (Laughing.) I love this. The C-130 is called Hercules. These rivalries between the services even within the services, it’s a whole different culture that I just love and admire. I mean, here these guys are all in a war zone, but they’re making fun of each other because of the airplanes they fly in. This guy happens to fly a tanker. He flies a converted DC-10 (they call a KC-10), and it refuels attack aircraft and others in the air. He says, “So I see from your website you’ve made a whole new host of friends even if they are Herc pilots. Well, just remember this: .” So the tanker pilots think nobody can get along without them. He said, “We appreciate you taking the time to see what’s really going on over there. I know you’ve been trying for a long time to get in country and many of us are happy to see that you made it. We knew you’d bring home the truth, and I’m enjoying hearing you report right now on the show and on your website. You have seen firsthand the many great people who are truly making a difference in the Middle East and the world. We look forward to seeing all of your pictures soon.” He said, “By the way, ‘Nobody kicks ass without tanker gas,’ is a famous tanker crew slogan.” Mark, I met a couple of retired tanker pilots over there who answered a bunch of questions for me about what that process is all about.
END TRANSCRIPT