RUSH: This is Merit in Dayton, Ohio, nice to have you on the program.

CALLER: Hi, Rush, I actually just wanted to thank you. I am a wife and sister of two Army soldiers. My brother served through tours in Afghanistan and my husband is now in Iraq, set to do a year, and it’s just nice to know that there are other people going over there and telling them that they’re doing a great job and that we’re all ready for them to come home and that we love ’em and we support ’em and they’re doing the right thing. 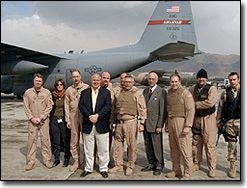 RUSH: Thank you. They are special people. It was an honor to be able to talk to them and convey what I think to be the majority sentiments of the people in this country. But I want to tell you, when we were at Kandahar? Kandahar is the place where there still are skirmishes going on. There was mortar fire the night we were there — nowhere near us but at the base. The base is huge. One of the things that I noticed when I had that troop event is that these people would all tell me what an ‘honor it was’ to meet me, and I thank them, but I’m honest here, folks: I can’t tell you how small I felt compared to these people, the age range was anywhere from 18 to 30 and even older. I mean, some of the command officers over there, career military, have been around for a long time, and I mean I’ll be honest. When I got there, second day I was looking forward to leaving. I mean, this was not a pleasant experience in terms of just living.

It was not anything an American is accustomed to, and I had it better than the troops did in the accommodations that I had, and they were nothing to write home about. I’m not complaining with it; it’s just the way it is and I’m glad I saw it and I knew it was going to be that way when I went, but like anybody else, I was looking forward to the end of the week when it was time to come home, and I met a couple guys in Kandahar, a couple 19-year-olds. The day I did my troop event was their first day, and I said, ‘How long you scheduled to be here?’

“A year, sir.” They both had copies of my books, and they didn’t know — because they just got there that day, they didn’t know — that I had an event scheduled there. They showed up, both of them. One of them had one of the books; the other one had the other copy, the other book, and asked me to sign ’em. And just to show you, they were excited to be there. They signed up for it. They were glad they were there. They were glad they were training was over and they had finally gotten to go, and I’ll tell you what I told them at Kandahar in this group toward the end of my one-hour, wasn’t a speech. Well, I guess you call it a speech, but I want to tell you guys, “I feel very small standing here in front of you, compared to what you’re doing, what I’m doing seems insignificant, and I don’t mind admitting this to you.” I said, “As I get older I have more and more respect for all of you who do what you do, and I think one of the reasons is that when I was your age, I had the chance and didn’t do what you’re doing. It was Vietnam and it was the beginning of the time when the country was turning against that war and so forth, and I had a lottery number that was pretty safe, so I didn’t worry about it. But I didn’t join. You guys have all joined, and as I get older and continue to mature, and I have a greater appreciation for what people like you throughout our country’s history have done and what you’ve meant, I’m literally in awe of you. You’re better people than I am.”

“No you’ve got to see this.” So we went in there, and I found what I thought, just a bunch of young people trying to pair up and go to the clubs, 20, 21 years old.” I’m telling this story to the troops and I said, “Little women are there wearing these little mini-skirts that barely cover anything,” and a guy in the front row said, “What’s wrong with that?”

And I said, “Nothing’s wrong with that. That’s the point. I’m not criticizing. I’m saying this country is so magnificent that we can have people who couldn’t care less about whatever threats we face. They’re just out there having a good time — and yet here you are, same age, I’m in awe of what you do. You could be the same kind of people.” I’m not being critical, but you’re here, and I just wanted to tell them how much I personally appreciated them and then wanted to convey how much all of you do, too — and that was the real reason I went over there, and I got that done.