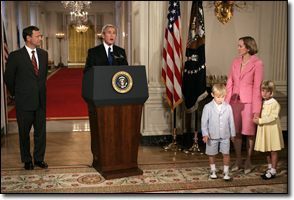 I guess you could marry the horse that you made love to out there in the stud farm out in the state of Washington, which we talked about yesterday, as long as the horse enjoyed the sex afterwards. It’s getting insane. But the Los Angeles Times story is running its story, making it look like none of this would have happened, that Romer vs. Evans in Colorado wouldn’t have happened without the pro bono work of John Roberts, the president’s nominee. Now, there’s no question this is going to upset people on the right. There’s no question the people on the right are going to say, “Wait a minute. Wait a minute! The guy is doing pro-bono work and helping gay activists?” and people are going to say, “See? This is what happens when you get caught up in the DC culture. This is what happens when you get caught up in the Washington establishment and culture: you want to be seen as enlightened and so forth.” Roberts, for his part, says he doesn’t really remember this case. He didn’t write anything. He didn’t go before the court itself, didn’t try the case — and it’s interesting it was pro bono because– what’s the name of his law firm? I’m having a mental block on the name of the law firm. It’s a big, huge firm. They’ve got offices in New York as well. But it’s well known that you can pass on pro bono work. I mean, law firms like their lawyers to take it. But you can pass on which case comes up, if you don’t want to do pro bono work on that case, but he took this and he says that he is not really cognizant, doesn’t really remember. Hogan &amp; Hartson is the law firm, and the case is “one of several that Roberts worked on the pro-bono at Hogan &amp; Hartson, and they expected their partners at this firm to volunteer time and community service. In his answers to the Senate questionnaire, Roberts talked generally about his volunteer work. 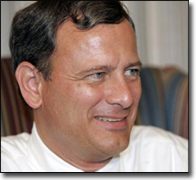 “‘My pro bono legal activities were not restricted to providing services for the disadvantaged,’ he wrote, explaining that he often donated-behind-the-scenes-time and expertise on projects.” This is the LA Times from which I’m reading. “Roberts’ work on behalf of gay rights activists whose cause is anathema to many conservatives appears to illustrate his allegiance to the credo of the legal profession to zealously represent the interests of the client whoever it might be. There is no other record of Roberts being involved in gay rights cases that suggest his position on such issues. He has stressed, however, that a client’s views are not necessarily shared by the lawyer who argues on his or her behalf.” I can confirm that in any number of ways. So it would be interesting to see what now transpires from this, because on the same day we have two stories. Well, we got one story and one story in the works, but we know about the story in the works. The story in the works is the New York Times conducting an in-depth standard, they say, standard investigation into the adoption records of Judge Roberts’ two children, and the LA Times the same day exposing Judge Roberts as a closet supporter of the gay rights movement in hopes of driving a wedge between the James Dobsons and the Pat Robertsons and the so-called Religious Right out there. I’m just going to tell you: It is going to cause some angst among certain groups of people who are always, constantly worried about the next Souter or [Anthony] Kennedy. You’ve just been warned. I’m just passing the information along here. We’ll be back — isn’t it fun today, Dawn? Ha-ha.

BREAK TRANSCRIPT
I want to briefly mention a couple of things that we talked about an hour ago on John Roberts, Supreme Court nominee. We have learned through Drudge, an exclusive report, that the New York Times is working on an in-depth investigation of the adoption of his children. He has two kids, five and four, both adopted. The New York Times, “This is just standard operating procedure,” they say. “Oh, yes we’ve got to dig deep! We need to know everything about these nominees,” and so they’re looking into the adoption records of his children, and I think they’re intrigued because those records — I’m not sure, but I think I heard or read somewhere that his adoption records — are “sealed.” Well, you know what that does to the media when you tell them that anything is sealed, as in medical records — or shall we say adoption records — then their reaction is, “Well, what’s he hiding? What’s he got to hide? Why can’t we see them?” They don’t understand that some people just want privacy. They’re not anything. They just don’t want a bunch of people barging in on their privacy. Well, whatever, it incites them, and so that’s being looked into. The story is not out yet. The New York Times is “researching” it. The LA Times today has a story, the headline of which is: “Roberts Donated Help to Gay Rights Case — In 1996, activists won a landmark anti-bias ruling with the aid of John Roberts.” This story is attempting to use gays as a wedge against Roberts with the so-called religious right and other conservatives. There’s something really insidious about this story as well, ladies and gentlemen, and it is this. and it just assumes that because of that, conservatives will now not like Roberts because he’s worked with gays. The presumption is clear in this story that conservatives have to hate gays, otherwise why do the story?
Why would this be a big story to the New York Times if they didn’t think that conservatives hate gay people? And so now they want to try to make conservatives hate Roberts as well, but that’s really not the point. The point here is that this LA Times story makes it appear that he is a stealth pro-gay individual to the point of assisting in the overturning of a duly passed Colorado ballot initiative. He worked pro-bono advising people in this case for his law firm back in 1996 — and this case, as I’ve told you, is Romer vs. Evans, and the people of Colorado voted in a ballot initiative to prohibit in Colorado law, the inclusion of sexual-orientation-in-civil rights laws — and this ballot initiative was overturned by the US Supreme Court as unconstitutional, in a case called Romer vs. Evans at the US Supreme Court. So the people of Colorado duly passed a ballot initiative; the Supreme Court said, “Oh, no, you don’t! Fourteenth Amendment says you can’t do that,” and they said, “Your votes don’t count; ours do, and your initiative is squat, dead,” and on that initiative it was pro-bono work by Judge Roberts assisting a gay activist, the LA Times story says — and they do raise the question: Hey, are these his views or he is just duly representing his clients in this case? The question needs to be asked: Could he possibly just be…? Yesterday we had a story that he was “too nice.” Yes, we had a story. He’s too nice a guy. What was that guy’s name? Reg Henry in the Pittsburgh Post-Gazette. He’s just too nice a guy — and I guess this proves it. He’s just too nice a guy. He’s working with those gays to help overturn this Colorado law. But then we had another story Bolton is too mean. Now we’ve got this story in the LA Times and the New York Times, investigating the adoption of his children. So it’s vicious out there, and the president asked for “decency.” The president asked for a decent investigation and hearing — and, of course, that’s now all out the window.
END TRANSCRIPT