RUSH: I want to start with something that happened on CNN this morning. Soledad O’Brien was talking to the mayor of New Orleans, Ray Nagin, and Nagin tells the story here of the friction that existed between President Bush and Kathleen Blanco, and this is basically what the mayor said that he told them to do to get past their impasse.
NAGIN: The president looked to me, I think he was a little surprised. I said, “No, you guys stay here. We’re going to another section of the plane, and would going to make a decision.” He called me in that office after that. He said, “Mr. Mayor, I offered two options to the governor.” I said, “Hit me.” I don’t remember exactly what they were. “Two options. I was ready to move today. The governor said she needed 24 hours to make a decision.”
O’BRIEN: The president told you the governor said she needed twen--four hours to make a decision?
NAGIN: Yes.
O’BRIEN: Regarding what, bringing troops? 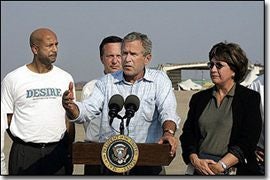 NAGIN: Whatever they had discussed, as far as what the chain. I was advocating a clear chain of command, so that we could get resources flowing in the right places.
O’BRIEN: And what did she say?
NAGIN: She said that she needed 24 hours to make a decision. It would have been great if we could have left Air Force One, walked outside and told the world that we had this all worked out. It didn’t happen, and more people died.
RUSH: All right, so this was obviously something that happened last week. Now, we know that President Bush called Kathleen Blanco on the Sunday before the storm hit and asked her to declare an emergency, and she dillydallied on that. Apparently when he got down there for the first time and wanted to talk to them, she wouldn’t agree to some plan to put it into action until the 24 hours passed that she could think about it. This according to the mayor of New Orleans, Ray Nagin. This that you just heard aired on CNN this morning. So, later, Soledad O’Brien interviewed the governor, Kathleen Blanco, and Soledad said, “There’s been much written about kind of a power tussle between you and President Bush and the mayor. Specifically the mayor was telling us about a flight on Air Force One, and he said that you and he and the president were all in a room and finally you and the president went separately to have a meeting. Twenty-four hours, is that right? Is that what came of our that meeting on the tarmac with the president?”
NAGIN: They gave me a very complicated proposition to look at. It didn’t help our effort in that instant moment. I needed a little time to understand what it meant. We went forward, all of us, all the resources were there. Nothing stopped. We ended up, um, coming to terms and agreements, and I think that the effort is going great.

RUSH: Well, you know, sort of hard to wade through all of this, but there’s one thing that’s clear, is they’re not? Mr. Snerdley, you want to take a wild stab here at what it is? Of these two sound bites, the mayor saying, “Well, you know, the governor said she needed 24 hours. Bush took her in a room. The governor said, ‘Well, it was too complicated. I mean, I have to figure out what this was all about,'” blah, blah, blah, blah. What does all this mean? Mmm-hmm. Well, we don’t know. Okay, maybe we know that she held things up for 24 hours, but what we also know is is that the president was on the case a lot sooner than the mainstream press wants anybody to know he was on the case, and we also have to conclude from this that the president understands the locals are in charge of this, and he was trying to get them to agree on something so we could get a plan into action, and he was having trouble with the state and local people who run the show. The federal government… We have a Constitution, and the Constitution limits the power of the federal government. Folks, you do not want… Let me ask you a question, all of you. I don’t care whether you live in Charlotte, you live in New York, you live in my hometown of Cape Girardeau. If something like this happens or some sort of catastrophe, some sort of terrorist attack, whatever it is, How many of you know what you are going to do? Because it is responsibility. If you think that if something like this happens in your neighborhood, that you do nothing until the cavalry shows up, you are going to be in heap dip trouble. trouble. Little dyslexia there on the syllables but you get the point. It’s incumbent on all of us to know what we are going to do in either circumstance, when we have forewarning or when we don’t.
To sit around and wait for some authority is the wrong thing to do, and this is becoming clearer and clearer to me that too many people sat around and waited. In this case, we have a Constitution. You do not want the US military rolling into your town at the first sign of trouble. There is a Constitution limiting the role of the federal government, and it limits the role of the federal government and delineates the rights the states have versus the federal government, and that’s why there’s a big argument when you get to Supreme Court nominations over the commerce clause because the US Congress is using the commerce clause to make laws in states they have no right to make, and the US Supreme Court, to now, has overturned some of those laws and that’s why Ted Kennedy and the gang are upset and they called justices that do this “conservative activists.” The commerce clause is being used to ban guns in school yards in California. The federal government has no power to do that, unless you let it. But if you want the federal government trooping in at every moment, the federal government is by the nature of bureaucracies and other more hideous things, it’s going to end up taking control of a whole lot of things. That’s its It’s a seat of power, and so what the president was doing here, it sounds obvious to me, was refusing to run roughshod over these people. Hey, mayor? Governor? We gotta figure out what we’re going to do here. You’re in the loop,” and apparently the mayor couldn’t get in the loop, or the governor couldn’t get in the loop — the mayor says, anyway. So 24 hours went by before a plan, and I’ll bet you after that 24 hours is when John Wayne arrived, General Honore from whom we will hear next.
BREAK TRANSCRIPT 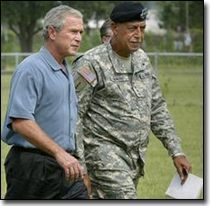 RUSH: Press briefing yesterday with Homeland Security Chief Michael Chertoff and Lieutenant General Russell Honore, the Ragin’ Cajun who has been dubbed here “John Wayne.” An unidentified reporter says a congressman said that the real problem he’s seen is that despite the thorough job that’s been done by the National Guard and the Coast Guard, the first responders that the problem has been the organization. They should be behind them lending them support. It’s been fractured by too much red tape. It’s delaying rescue operations, delaying evacuations. He said, “There’s a lack of unified chain of command. There’s a lack of a sense of urgency, that the normal rules don’t apply.”
HONORE: That’s BS. I will take down on behalf of every first responder down there, it is BS. I will not diffuse where the congressman may have gotten that some or if he had a personal incident, but I can tell you that’s BS. We’ve got the 300 helicopters and some of the finest EMS workers in the world working down there in New Orleans and they are making it happen.
RUSH: How does this stuff generate? I’ll tell you. It generates on this kooky left-wing websites. I’ve been reading these websites about how there are bottlenecks and there’s too much — no sense of urgency, “Nobody really cares.” Subtone: “They’re black; nobody really cares.” The kooky left is putting that out. Of course then it finds its way to a mainstream reporter who then has to ask this question. “So you guys don’t care enough? There’s really no sense of you do down there?” You know, she doesn’t say “because they’re black,” but, you know, that’s where this stuff germinates and percolates up from these websites, and this guy was mad when I heard it. He’s gotten 20,000 people out of the Convention Center in one day when he showed up down there, and he’s got all these helicopters in the air. Nothing can make these people happy or satisfied. When there’s nobody there, then that’s Bush’s fault. Nobody cares. When they get there, there doesn’t seem to be a sense of emergency, must be because the people down there are poor and black and nobody really cares whether they die, and then I have also seen stories there are too many military now! There are so many military that they’re running into each other. It’s a shame, but all these critics, can make them happy — and I’ll tell you, they don’t want to be happy. They want this to fail. They want this to end up looking bad so they can continue to point the fingers of blame.
My friends, I’m going to tell you what this is, the hurricane and the recovery effort is just the next thing in line that the left in this country has used to try to destroy the Bush presidency. It can debate where it started, Florida 2000, then you can go to the — I’m sure there are things before this, the National Guard story, four or five times with no new information, then we had the forged documents from Bill Burkett, then we’ve got the 9/11 Commission, we had Richard Clarke and the Jersey Girls, and then we got Cindy Sheehan and her story, and now Cindy Sheehan couldn’t get arrested. She couldn’t. I mean, if she wanted to get on TV today, she couldn’t. Her support group has abandoned her because she’s not the story. There’s a much bigger one now, the hurricane, and its aftermath and the effort to, once again, destroy the Bush presidency. Now I was aware of this over the weekend, and I was confidence it won’t going to work because nothing else has worked. The thing that bothered me the most about it was when I was reading some right-wing websites, how they decided to get in on the action. They took the media’s bait hook, line, and sinker some of them did and started ripping on Bush and ripping on the federal government for not caring enough and not doing this and not doing that and so forth and on, and I know why. They’re just worried about their own image. You know, they want to be thought of as independent and not part of right wing even though they are because they have so many associates and friends that are part of the DC media and other establishment culture.
END TRANSCRIPT