Reid’s 1993 Bill Cracked Down on Illegal “Freeloaders” What Changed?

It gets even better, ladies and gentlemen. Drudge has a flashback up on his site. “Dem Senate Leader Harry Reid: ‘Our Federal Wallet Stretched To Limit By Illegal Aliens Getting Welfare. Even worse, Americans have seen heinous crimes committed by individuals who are here illegally.'” This is August 5th, 1993. So 13 years ago Harry Reid agreed with me and all of us about this, but 13 years can make a big difference, can’t they? Now when they think Republicans are on the ropes, “Weeeell, it’s time to forget what they stood for.” You cannot expect consistency or honesty from these people. They themselves are opportunists. That’s why they don’t want to state a position on anything because they don’t know which position they’re going to need, depending on the flow of events. “August 5th, 1993, from the office of Senator Dingy Harry Reid. ‘In response to increased terrorism…'” This is August, 93. Remember, it was February of ’93 that the World Trade Center was hit for the first time.
“In response to increased terrorism and abuse of social programs by aliens, Sen. Harry Reid (D-Nev.) today introduced the first and only comprehensive immigration reform bill in Congress. Currently, an alien living illegally in the United States often pays no taxes but receives unemployment, welfare, free medical care and other federal benefits. Recent terrorist acts, including the World Trade Center bombing, have underscored the need to keep violent criminals out of the country. Reid’s bill, the Immigration Stabilization Act of 1993, overhauls the nation’s immigration laws and calls for a massive scale-down of immigrants allowed into the country from approximately 800,000 to 300,000.

“The bill also changes asylum laws to prevent phony asylum seekers. Reid said the U.S. open-door policy is being abused at the expense of honest, working citizens. ‘We are a country founded upon fairness and justice,’ Reid said. ‘An individual in real threat of torture or long-term incarceration because of his or her political beliefs can still seek asylum. But this bill closes the door to those who want to abuse America’s inherent generosity and legal system.’ Reid’s bill also cracks down on illegal immigration. The 1990 census reported 3.3 million illegal aliens in America. Recent estimates indicate about 2.5 million immigrants illegally entered the United States last year. ‘Our borders have overflowed with illegal immigrants placing tremendous burdens on our criminal justice system, schools and social programs,’ Reid said. ‘The Immigration and Naturalization Service needs the ability to step up enforcement. Our federal wallet is stretched to the limit by illegal aliens getting welfare, food stamps, medical care and other benefits often without paying any taxes.'”

This is Harry Reid who today, 13 years later, is doing everything he can to ram an immigration bill that is amnesty down the throats of Republicans and everybody else in this country, and it is totally at odds with his own proposed legislation back in 1993. Here are some specific provisions of Reid’s Immigration Stabilization Act.
“-Reduces annual legal immigration levels from approximately 800,000 admissions per year to about 300,000.
“-Reforms asylum rules to prevent aliens from entering the United States illegally under phony ‘asylum’ claims.”
It goes on and on and on. There is another page and a half of this.

“-Clarifies that a person born in the United States to an alien mother who is not a lawful resident is not a U.S. citizen. This will eliminate incentive for pregnant alien women to enter the United States illegally, often at risk to mother and child, for the purpose of acquiring citizenship for the child and accompanying federal financial benefits.”

So back in 1993, in Clinton’s first year, and the Democrats feeling their oats! I mean, you gotta remember what the context of the times was. The Democrats were excited as they could be. They were thrilled. They just vanquished Bush 41; they thought they had vanquished me, and they were on a roll and Clinton was going to set things right. His tax increase, retroactive tax increase had been announced. They were in Fat City, folks. So Harry Reid proposes this bill, and I dare say it bears no resemblance to anything he supports today.

Now, if he felt this way back then, what’s changed? The problem’s only gotten worse. I don’t know what happened to his bill. Obviously nothing came of it. Maybe he was just proposing the bill knowing nothing was going to come of it but he wanted it on the record anyway, but he still proposed it and he still associated himself with that set of beliefs. He’s out there sounding the panic button and warning: “We better get this fixed. It’s a big problem.” He’s all concerned about the “cost to American taxpayers,” and the “welfare state drain” that the “illegal aliens” were on the system back then. Now, what’s changed? It’s only gotten worse — and today, Senator Reid probably would have to dissociate himself from every word in that release statement from his office 13 years ago.

I don’t know what he’ll say when he’s confronted with this, and he will be at some point. I don’t know what he’ll say. “Weeeeell, the times were different back then.” What’s he going to say, because the situation is only worse! So the bottom line is, these are opportunists. You can’t trust that they believe anything other than what you know liberalism is. If you can just take solace in that, just be confident. Forget what they say; watch what they do. Understand that they’re liberals, and despite everything else, that will help you identify who they are and what they want to do. 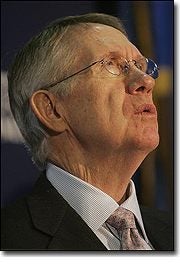 Harry Reid proposed an immigration bill on August 5th of 1993 that bears no resemblance to the position Harry Reid has today. His bill was based on the fact that way too many illegals are here, and they’re costing us way too much money in the welfare state services, and we have to eliminate that. I mean, Harry Reid sounded like a Californian! (You can’t go to California without stirring up an immigration debate. Prop 187? They got fed up with having to pay health care and Medicare and education and all this for illegal immigrants. So the state voted, a Democrat state, for Prop 187, and they voted not to do it any longer — and of course a federal judge came along and said it’s unconstitutional. The will of the people: struck down again by an activist judge. But nevertheless, I got an e-mail from a friend who said somebody on the Free Republic website has a great idea. I’m not surprised that a Freeper would have a good idea.

What ought to happen is the Republicans in the Senate ought to go get a copy of Harry Reid’s release announcing his bill, August 5th of 1993. Go out and get his bill and make it their own, because Harry Reid’s bill from August 5th, 1993, is exactly the position that you hear me articulating on this issue all the past week or two. It’s identical! Some of the things that Reid — I’m not going to go through it again because I already spent valuable programming time doing this. You can check with the website later, or you can go to Drudge right now and read it. He still has the link up to, “Flashback: Dem Senator Harry Reid: ‘Our federal wallet stretched to limit by illegal aliens getting welfare.'”

Republicans ought to make this their bill!

Senator Reid had the right idea. Let’s not forget, by the way, that Senator Reid threatened a filibuster on immigration. This was back in March, March 23rd. “As the Senate prepares to tackle the most sweeping immigration reforms in years, [Dingy Harry] vowed Wednesday to do everything in his power, including filibuster, to thwart Majority Leader Bill Frist’s proposed overhaul. Minority Leader Harry Reid, D-Nev., said he would ‘use every procedural means at my disposal’ to prevent Frist from bypassing the Judiciary Committee. Frist, R-Tenn., has made clear the Senate will take up his proposal next week.” So Harry Reid’s totally, totally opposite the position today than he was back in 1993, and the problem has only gotten worse! There is nothing that’s happened on the improvement side to make Dingy Harry say, “Yeah, I don’t need my bill anymore. That ’93 bill, it was tough, but we don’t need it.”

If anything, we need it more than ever.