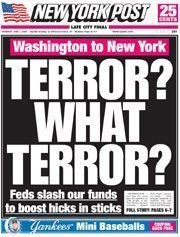 RUSH: We have a pretty wide and varied general news stack that’s going to provide a lot of entertainment. For example, have you seen the cover of the New York Post today? Let me read it to you. “Washington to New York: Terror? What Terror? Feds Slash Our Funds to Boost Hicks in Sticks.” (Laughing) Oh, Chuck Schumer, the New Yorkers are all upset because places like Kentucky and Wyoming are getting a lot of money to fight terrorism from Homeland Security, and there’s a 40% cut in how much New York is getting. Folks, it’s an election year, and Mrs. Clinton is up and these things are a factor. Still, I love these tabloid headlines. “Feds Slash Our Funds to Boost Hicks in Sticks.” (Laughing.) I love it.
All right, let’s talk about Haditha and this story — and folks, I don’t know if it’s happened yet, but there’s going to be a hurricane or few of them this year. This is the first day of hurricane season. It is absurd the way this is being covered. There has not been a hurricane sighting yet, but if you turn on any of the cable news networks they’re going 24/7 with hurricane prep, hurricane this, hurricane that. They’re already scanning the Atlantic Ocean via satellite photos. It’s just amazing. I had dinner with some people last night, had some people over to the house for dinner, and one of the young ladies started talking about bird flu, and it just sort of set me off. I said, ?You’re worried about bird flu??
?Yeah, I have a six-year-old son. Aren’t you worried??
I said no. I refuse to participate in this crisis after crisis after crisis news cycle. Everything is a crisis anymore. We’re not allowed to have a normal, every day life. I said, “Do you realize how much better life in this country gets every day?” Look at the life expectancy. Look at our quality of life. Look at our standard of living. You want to see real abject poverty, and you want to get depressed, go where I’ve been, go to Afghanistan and look at how people — and they don’t complain about it. Their lives there are what they are. They’re normal. People going up and down a hill 3,000 feet every day just to get fresh water because there aren’t any pipes and there is no plumbing. And yet if it’s not bird flu, if it’s not global warming, now it’s hurricanes or it’s the war in Iraq or it’s domestic spying or its Every day is a crisis! To me, it’s just amazing to watch its impact. This woman last night had a genuine fear of bird flu.

Well, it happens, yeah, pandemic. We don’t know, but the evidence so far is that all of these — look at AIDS. Twenty years ago, AIDS was supposed to have infected all of us. It was going to wipe us out. It was going to spread to the heterosexual population. It hasn’t. What about Africa? Well, different situation. It hasn’t happened here. We had the Population Bomb with this guy Ehrlich back in the seventies, “We only have 20 years left! Why, we have too many people on the planet, running out of resources,” blah, blah, blah. The guy We’ve got Al Gore, “Ten years and the planet is history!” We’ve had Ted Danson. I can think of countless examples of this and it’s just amazing to watch how people are impacted by it. It’s like I’ve always said, “Okay, if you want to have a recession, go ahead. I’m not participating.”
“Well, easy for you to say.”
Well, can say it. All of these conventional wisdom attitudes that are created because Drive-By Media needs crisis, particularly when their enemies are in power and are leading the things that happen. They’ve gotta always have some crisis and try to blame it on the people who are the enemies of the Drive-By Media, the liberals and so forth. 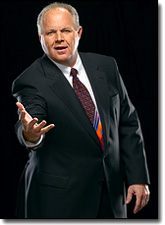 So it’s just amazing to watch this hurricane coverage today as though there’s one out there and it’s about to strike, and nobody’s prepared. Oh, my gosh. In Florida you can read newspapers all up and down the south Florida coast. Nobody’s prepared. Yesterday — this is the smartest thing governments have ever done. Yesterday they said, “By the way, hurricane season starts tomorrow, and you are on your own. We can’t do it.” Amen! New Orleans was a classic example of a whole population who had been born and bred and raised on entitlement thinking and thinking their government was going to help them; the government was going to take care of it, and New Orleans is saying, “Hey, you are on your own. There is no shelter of last resort. We’re not opening any domes. You’ve got to get out, and it’s going to be mandatory at category two,” and a lot of south Florida governments are saying the same thing.
Now, there’s a lesson there, folks, because if they’re telling you that they can’t do it, that you’re on your own when it comes to a disaster like a hurricane, then what they’re also telling you is you’re on your own in most other aspects of life, too, “and if you’re going to spend your time depending on us or waiting on us, you’re going to be sadly disappointed,” which is one of the basic tenets of conservatism that we have been attempting to instruct and inculcate into skulls full of mush for almost 18 years.