RUSH: Paul in Chicago, I’m glad you waited, welcome to the EIB Network, sir.
CALLER: Rush, good afternoon. How is it in midtown? Good? (Laughing.) I was going to ask you a question about your comment about the woman out in San Diego. I have no idea what her background is. But the fact that, you know, I think you’re being a little bit manipulative. I wouldn’t say manipulative, but you’re distorting… how she said it is not… she’s purging people. She’s not saying on government stationary if she ever became elected to send us your illegals, your poor, your huddled masses, that’s the only way I’m going to get elected. I mean, I used to work — when George Allen was a representative in Charlottesville. And I worked for Eric Cantor in Henrico County, and we were employing people who were unregistered voters. They weren’t illegals, not that I know of. But they were helping out, and if anyone misspoke spoke like that — this woman has far bigger problems than, you know, a statement like that which I doubt very much she’s saying, “Oh, yes, please send me your illegals,” because this election, as you pointed out is pretty close. I mean, San Diego Tribune out there probably has it at 50-50. I mean, she’s not going to encourage people then have a recount and lose. So I think you’re a little bit off on that. 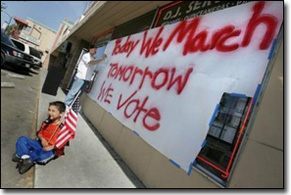 RUSH: Well, I appreciate the comment. I’m sure you do think I was off, but let me tell you, my guess is this is not the first time she’s encouraged illegals to go out and help her out. I think she’s probably been doing it a lot. This is just the first time there happened to be a recorder. Don’t forget out there, Paul, you know, Bob Dornan was an incumbent in his Orange County district and Loretta Sanchez emerged victorious, stunning and shocking everybody. Dornan lost that race because some illegal aliens, it turned out, voted in that election. I mean, the idea… I’m sure that you probably don’t think it possible Democrats would ever engage in encouraging illegals to work on their campaigns and maybe even vote for them. But I do.
In fact, I know they’re out there soliciting membership in the Democratic Party, out there recruiting at all these protests. I’m going to have to find this story about what Al Gore did back in 1996. I should have put this in the… Maybe I did put it in the immigration stack here. Here’s another one I can use to bolster the same point. Yes siree bob. All right. By the way, whatever she wants to spin out there: “I wasn’t urging them to vote. I misspoke out there.” The bottom line is, Francine Busby was asking, was suggesting that illegal immigrants campaign for her. It’s on tape. She was asking them to work and encouraging them to work for her election — and, you know, whether she wants to spin it, “I didn’t say anything about vote illegally,” doesn’t matter.

She was soliciting their assistance and it was instructive, tells us all we need to know. Here’s a story, and it’s actually a column that the Wall Street Journal has reprised by David Shippers from August 23rd of 2000: “Democratic presidential candidate Al Gore has been talking a good game recently about integrity in politics. But that’s not how he always plays it. In June of 1998 as part of our oversight investigation of the justice department, my staff and I, reporting to the House judiciary committee, were looking into the White House’s use of the Immigration and Naturalization Service to further its political agenda.

“The most blatant politicization of the agency had taken place during the ’96 presidential campaign when the Clinton-Gore administration pressured the INS into expediting its Citizenship USA program to grant citizenship to tens of thousands of aliens the White House considered likely Democratic voters. The handling of this pressure campaign, end result of which was the circumstance invention of long established policies at the INS, was left to Al Gore. He and his office were responsible for keeping the pressure on, a job they did admirably as e-mails we recovered clearly showed. The White House’s INS campaign started early in the election year but ran almost immediately into a road block.
“Commissioner Doris Meisner didn’t want to speed up the naturalization process, and she warned the White House that such a move might be viewed as politically motivated. Undaunted, the White House asked Douglas Farbrother of Mr. Gore’s recently formed national performance review staff to look into removing barriers to citizenship. As recently as March of 1996, Farbrother was reporting his efforts and results to Gore’s office. In fact, at one point Mr. Farbrother sent an e-mail updating Elaine Kamarck, an official in Gore’s office. Ms. Kamarck responded in all upper case type, ‘THE PRESIDENT IS SICK OF THIS AND WANTS ACTION. IF NOTHING MOVES TODAY, WE’LL HAVE TO TAKE SOME PRETTY DRASTIC MEASURES ABOUT SPEEDING UP THE NATURALIZATION PROCESS OF THOUSANDS OF ALIENS AND THEIR CITIZENSHIP.” The naturalization is so they could go out and vote Democrat. So the idea that Francine Busby or any other Democrat would not be encouraging illegal aliens to go out and either vote or work in their campaigns, it would be much harder to believe that that’s not happening based on history, recent and not so recent. So don’t think I was out of context at all. In fact, I probably was not hard enough on Ms. Busby. Should have asked originally how many other occasions are there like this where she has made similar requests of similar people.