RUSH: I am stunned that anybody is surprised that there would be terrorist cells in Canada that wanted to blow up Canadians. Anybody surprised? I mean, terror cells anywhere that want to blow up anybody that’s not Islamofascist. Canadians I guess got a jolt of reality, and you know how they found out about this? Domestic intelligence, ladies and gentlemen, by something called the Canadian CSIS. Greetings. Great to have you with us. Broadcast excellence now back from what hopefully was a festive or restful weekend for all of you. I’m Rush Limbaugh, America’s real anchorman behind the Golden EIB Microphone. The phone number is 800-282-2882, if you’d like to be on the program, the e-mail address Rush@eibnet.com. 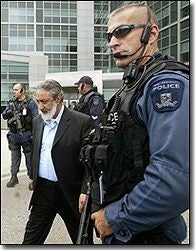 Yes, “[A] shadowy group of disaffected urban youth began talking in an Internet chat room in the fall of 2004 espousing anti-Western views, the Canadian Security Intelligence Service was listening. The spy agency, and an alphabet soup of other security agencies across the continent, closely monitor such sites, where talk may sometimes turn to buildings and bombs and bringing global jihad home to North America, to Canada. Often it’s just that talk but when CSIS began monitoring the sites allegedly used by some of the 17 men and youths arrested on terrorism-related charges in a sweeping series of raids across the GTA Friday evening, the Canadian spy agency heard enough to remain interested, and increased surveillance of the group….

“Four months after the surveillance began, two Americans, from the Atlanta, Ga., area, popped onto the radar. Syed Haris Ahmed and Ehsanul Islam Sadequee had been communicating by email with the Canadian group,” according to investigators. “According to the Los Angeles Times, U.S. authorities were also watching the two Americans, and at some point discovered communications between the men in Canada and Atlanta and other suspected terrorists overseas…” I can only hope that they didn’t tap a phone in Washington doing this, or this case could be thrown out. The ACLU could probably take up their case. It’s a classic illustration of reality intruding itself on the American left, and we could go through all the details of this, but it shouldn’t surprise anybody.

I wonder how many in Canada are shocked. I understand that there’s quite a buzz up there, various police authorities up there are urging calm over all of this. The leader of this gang of 17, the eldest is a guy named Qayyum Abdul Jamal. He’s 43. He was described by his lawyer as an active member of the mosque, the al-Rahman Islamic Center for Islamic Education, and people say, “Ah, it’s no big deal. They’re just 17 kids. They’re from the same mosque. This guy is not an imam,” and some people are saying, “We’d rather he not be an imam.” It’s these freelancers out there that, you know, young kids of all ages who get inspired by the likes of Osama bin Laden and others and want to emulate them, go out and set up these freelance cells, like this apparently is.

They can be like what happened in London. These things can be far more dangerous than even these imams. That’s a difference, really, without a distinction. The New York Times did some reporting on this that is just amazing. The last half their story on this is absolutely worthless. Listen to some of the details of the New York Times story about this. The leader, Qayyum Abdul Jamal, “lives in a handicapped-accessible apartment, but he didn’t use a wheelchair.” The mosque has lots of books in it, according to the New York Times. Women had to enter this mosque through a side door but it was locked, and a car outside the home of Qayyum Abdul Jamal “had an illustrated guide to understanding Islam on its dashboard.”

That’s the kind of in-death reporting you don’t get anywhere else but the New York Times. The real story of this is that this plot began in a chat room. It was monitored by Canadian intelligence. The threat in North America continues to be real, and there are people in this country, predominantly on the left and in the Democratic Party who are attempting to sabotage just this kind of effort to detect this kind of potential so as to prevent it. These are the same people, many of them in New York, still upset over the decrease in funding that they’re getting from homeland security. So while the left lives in its alternative universe and creates its little dream world, reality has this bad habit of happening to intrude.

For example, let’s go to San Diego. Grab audio sound bite #1. The election, the special election tomorrow, California 50. This is Duke Cunningham’s district, this Francine Busby versus Brian Bilbray, and last Thursday night in Escondido, Francine Busby was speaking before a largely Latino crowd at The Jocelyn Senior Center, and one of the minutemen was running around out there with a tape recorder — and, you know, you can’t take these into classrooms, folks. You’re not supposed take tape recorders into classrooms to record professors; but so far the left has not proscribed tape recorders among minutemen following candidates around. A man in the audience asks in Spanish, “I want to help but I don’t have papers.” By the way, this audio first aired on our buddy Roger Hedgecock’s show last week out in San Diego. Here’s what Busby’s answer was. 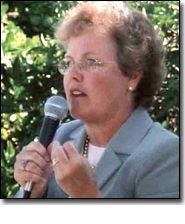 BUSBY: You can all help.
MAN: (speaking Spanish).

RUSH: All right, now, intruding on her little dream world and fantasy world is reality. Here’s the Democratic candidate telling illegal aliens: It doesn’t matter. You don’t need papers for voting. You don’t need to be a registered voter to help. She’s out there saying she misspoke. She says that she didn’t mean what she was trying to say out there, but she said it. The latest poll on this from Taegan Goddard’s website is that Bilbray has now moved ahead by a couple points, and this appears to be one of the reasons. This is the final poll before the special election tomorrow for California 50. Survey USA finds that Brian Bilbray has a two-point lead over Busby 47 to 45%. The previous poll survey USA took had both candidates tied.

The poll shows a big swing in the independent vote towards Bilbray, the Republican. So you have once again the libs create their little dream world and their little alternative universe and reality has a way of intruding on it. In this case Francine Busby just happened to blurt out what we all know Democrat policy is nationwide. But no Democrat before her has had the stupidity to actually say it. Now, the Democrats did it back in 1996. You know, Al Gore naturalized — we got the story coming up in our big immigration stack. Al Gore participated in a national — well, he nationalized over a million immigrants right before the ’96 election, hoping to boost the number of Democrat voters, and so we see the Senate immigration bill, that conference committee will get started soon this month with the House, and we see now what the real purpose of it is. It is to go out and harvest a whole bunch of new future and present voters. Listen again to Francine Busby Thursday night in Escondido. The question, guy asks it in Spanish, “I want to help, but I don’t have papers.”

BUSBY: You can all help.

RUSH: Thank you, Ms. Busby. I don’t know if she is a rank amateur candidate or not. I don’t know how much experience she has. She said the subsequent statement was to clarify what she meant. When she says, “You don’t need papers for voting. You don’t need to be a registered voter to help,” When she says what she meant to say was, “You don’t have to vote for me to help. You can do a lot of things besides vote for me, and I just misspoke,” so she’s trying to slither out of that. But it’s too late. It’s out there, and on the weekend before the election. Here’s some of the demographics in this poll. Remember, the Democrats are already setting this up for her to lose by saying, “She’s going to win anyway. I mean, we win anyway if we’re this close in this Republican a district,” and they did this before this gaffe. Here’s a key factor.

Brian Bilbray leads by 14 points among voters age 65 and over, and those are the ones that tend to show up in great numbers and vote. Busby leads by 20 points among young voters younger than 35. The two candidates are effectively tied among voters 35 to 64. Now, should younger voters, historically unreliable, vote in unexpectedly large numbers it would be

an advantage to Busby. Should older voters vote in disproportionately large numbers, advantage to Bilbray. Well, it seems to me that older voters vote as they normally do, the vote turnout among older voters is the highest percentage of all demographic groups. But Busby clearly stepped in it here, and they’re trying to wiggle out of this. But again, so many things, just two little stories here, the thing in Canada and the thing with Francine Busby’s lips and her mouth, reality intruding on the false front that they have attempted to build about, “There’s no threat; there’s no war. Bush is creating all the terrorists. There’s no threat. We don’t need to be at war,” and of course that false reality blown to smithereens by New York City’s reaction to its cut in terror funds. So we got a good start this week here, folks.

RUSH: By the way, one little note about this band of jihadists up in Canada, and they were indeed… Well, this is alleged by the Canadian government. They were inspired by Al-Qaeda, and the police up there say that they smashed this ring, and this ring was plotting to bomb hard government targets rather than soft civilian ones, like shopping malls or nightclubs. They were going to go after institutional targets, federal agencies in Toronto, such as CSIS headquarters on Front Street and Royal Canadian Mounted Police building were on the list of targets that these people had. So next time you hear some lib suggest that we don’t need any stinking international phone monitoring going on or surveillance, just say, “Uh, Canada?” How about this? The libs up in Canada getting involved in all this. Nobody talks about this, but that country (interruption). Well, they’ve got a new prime minister up there. In fact, the guy is a conservative, but for the longest time that… (interruption). Well, who? Mini-Me Bush? Who? The new prime minister of Canada is being called a new Mini-Me Bush.