It’s Another Conservative Crackdown: The Senate Immigration Bill Is Dead

RUSH: The immigration bill is dead, ladies and gentlemen. You know, the first AP version of this story which came out about 7:44 last night, “In a defeat for President Bush, Republican congressional leaders said Tuesday that broad immigration legislation was all but doomed for the year.” And get this, “a victim of election-year concerns in the House and conservatives’ implacable opposition to citizenship for millions of illegal immigrants.” Now, they softened this version in later dispatches, but I’ll translate this for you.
“A victim of-election-year concerns in the House.” That’s very simple. It means members of the House realize that their constituents are dead set against the Senate bill and they’re not going to give it the time of day. What happened here is that the House said, you know,

we’re going to debate this. We’ll debate this when we come back in August, or come back in September, after our August recess. Well, there’s nothing going to be going on in September, other than members leaving town and coming back to town, going back home to campaign for their seats that are up for election in November. Also, “conservatives’ implacable opposition to citizenship for millions of illegal immigrants.” Conservatives, just cold-hearted, mean-spirited SOBs.
I don’t care what these people think, either, folks. I don’t care what the press thinks. I don’t care about it at all. The bottom line is, this immigration bill, the Senate bill, is dead, it is killed, and you did it. Make no mistake. This is an illustration, I have always thought that on balance, an informed, educated, participating American populous will get what it wants. There are exceptions to this, of course. But, I’ll tell you what, the Senate was going to run roughshod over what anybody in the country wanted, and it’s clear what happened. I mean, there are a number of factors that went into this with the Senate, bad thinking, ill-timed motivations, but I also think that there was a lot of pandering, in addition to the fact that they saw whole bunches of new voters, senators in both parties, and I think they saw an opportunity to grow government and make it even bigger, and at the same time — and make no mistake about this, too, as I said earlier, the moderate, elitist Republicans, the country club blue-blooders were doing everything they could in the Senate bill on immigration to destroy conservatism.

Make no mistake about the about fact that elitist Republican country club blue-blood Rockefeller types don’t like conservative Republicans when they are running the party. That’s why there’s enmity for the so-called Christian right and so forth. And they had a lot of things that were motivating them in this bill, but I also think there was pandering. I actually think that some of these linguini-spined senators actually saw all these protests and got scared. I think they misinterpreted the protests. They thought the protests were a bigger indication of public sentiment than your opinion on this. The public sentiment of illegal citizens held more sway, or caused more fear, in the hearts of some of these senators than did your opinions about it. Plus, the Senate had the luxury of having a bunch of senators support this who were not up for election this year. That gave them a little cover. 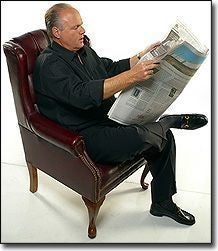 LA Times editorial on this. “The GOP’s immigration shame.
Republicans choose divisive campaign politics over urgently needed policy — How can you tell when a governing party is running out of steam? When it controls all branches of government yet abandons even the pretense of addressing an issue most members claim is a ‘crisis.’ That’s what the GOP-led House did Tuesday in announcing that discussions over reconciling its enforcement-centric immigration bill with the Senate’s legalization-focused version will be pushed back to September at the earliest, and only after completing more hearings. Instead of naming negotiators and attempting in good faith to bridge the chasm between the bills, House leaders are busy naming locations for ‘field meetings’ that can deliver maximum demagogic effect in the run-up to the November election. These meetings are nonsense.” So town hall meetings are nonsense. To go out and find out what your constituents — that’s nonsense, absolutely foolish, it’s a waste of time. It’s pure politics. These Republicans care only about getting elected.
A governing party running out of steam? Folks, let me tell you what happened here. This was another conservative . The LA Times thinks this represents a Republican crackup. This is a conservative crackdown. You have done it again. The members of the House heard you and they have put the brakes on a horrible piece of legislation. The LA Times is obviously from the school of thought that legislation for legislation’s sake is the answer to all problems.