RUSH: We have a rise, folks, out of Reuters. We have a rise out of the AP — and I think we got a rise out of the French News Agency. There is a story by our old buddy David Bauder in the Associated Press. ‘Three news agencies on Tuesday rejected challenges to the veracity of photographs of bodies taken in the aftermath of an Israeli airstrike in Lebanon, strongly denying that the images were staged. Photographers from The Associated Press, Reuters and Agence France-Presse all covered rescue operations Sunday in Qana, where 56 Lebanese were killed.’

No! They can’t even get that right. The latest number is 27. 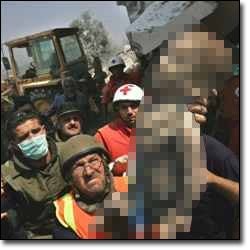 ‘Many of their photos depicted rescue workers carrying dead children. A British Web site, the EU Referendum blog, built an argument that chicanery may have been involved by citing timestamps that went with captions of the photographs. For example, the Web site draws attention to a photo by AP’s Lefteris Pitarakis time stamped 7:21 a.m., showing a dead girl in an ambulance.’ Now, this is the thing that I wanted you all to look at earlier in the week. I assume most of you, if you didn’t have a chance to go look at it on the website, you still remember me talking about this.

‘Another picture, stamped 10:25 a.m. and taken by AP’s Mohammed Zaatari, shows the same girl being loaded onto the ambulance. In a third, by AP photographer Nasser Nasser and stamped 10:44 a.m., a rescue worker carries the girl with no ambulance nearby. The site suggests these events were staged for effect, a criticism echoed by talk show host Rush Limbaugh when he directed listeners to the blog on Monday.’ I am guilty. I plead guilty to that. (I did so with pride.) They quote me as saying, ”These photographers are obviously willing to participate in propaganda,’ Limbaugh said. ‘They know exactly what’s being done, all these photos, bringing the bodies out of the rubble, posing them for the cameras, it’s all staged. Every bit of it is staged and the still photographers know it.”

Now… ‘The AP said information from its photo editors showed the events were not staged, and that the timestamps could be misleading for several reasons, including that web sites can use…’ By the way, I could read this whole story to you and there’s not a specific denial of the allegations. I mean, there is a specific denial but they do not refute effectively what is being alleged here about these photos being staged. All they do is talk about the timestamps, and they say that the timestamps could mean anything. They don’t necessarily mean when the picture was taken. They could mean when the picture was posted on a wire.

But they don’t deal with the fact that the whole set up was perhaps staged by the Hezbos and that they fell for it. Kathleen Carroll, the AP senior vice president and executive editor, said, ”It’s hard to imagine how someone sitting in an air-conditioned office or broadcast studio many thousands of miles from the scene can decide what occurred on the ground with any degree of accuracy.” Any degree of accuracy? Miss Carroll, can I tell you why I have doubts about you? Because I have doubts about you! You are the Associated Press. You have an agenda. I, myself, have been reported on, factually incorrectly, I can’t tell you how many times by various reporters under your command. Based on that alone (and I have much more), there’s plenty of reason for me to that you have total objectivity in what it is you are doing.

There is a wealth of data out there that suggests that you guys at the Associated Press and everywhere else in the Drive-By Media have a certain desire when discussing the outcome of events, in this particular war, between the Hezbollah, and the Israelis. There is absolutely no question. People that study this have no doubt about it. Bloggers left and right are constantly contrasting AP headlines with story details, comparing AP stories with other versions of stories to show things that are omitted or added that add up to clear bias — which is fine, Miss Carroll, but the thing you don’t understand… We don’t care that you have a bias because we know that you do. The thing that offends everybody is that you deny it! We understand that you are a thinking, engaged human being. Everyone at AP is, from the writers to editors to photographers.

But then to pretend that as engaged, thinking human beings you don’t care about the outcome of the events you cover defies believability, defies logic. You are human beings. It is not possible to be that objective in every element of news that you cover. It just isn’t as a thinking human being. Now, if you are just a sponge, even if you are a sponge, you are a sponge for a reason. It is impossible not to have a stake or an interest in the outcome of events. Miss Carroll also said, ‘in addition to personally speaking with photo editors, ‘I also know from 30 years of experience in this business that you can’t get competitive journalists to participate in the kind of (staging) experience that is being described.” 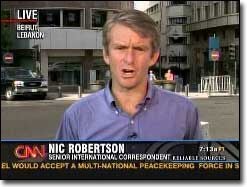 May I call your attention to Nic Robertson, Miss Carroll, of CNN, who admitted that he was led around early on in this war by Hezbo press officers? He was shown what buildings to shoot, what buildings he couldn’t shoot, and this was made public by Howard Kurtz on CNN on their Sunday morning show Reliable Sources. Interestingly, the CNN show Reliable Sources does not get put on CNN International. Miss Carroll, while you are an offender in this case, you don’t even hold a candle to the BBC. By the way, Richard Engle of NBC I think has admitted the same thing, that the Hezbos are parading them around with press officers and showing them certain things. It is silly to deny.

There is no competition. There may be competition for the pictures, but how come the pictures are all the same? Be it AP, French News Agency, Reuters, the pictures are all of the same. How come you’re not out there trying to find something different from what those guys are finding? This is the common complaint that those of us who study you people, have. No matter who it is, French News Agency, Reuters, AP, it’s all the same stuff. New York Times, NBC, all the same stuff. The fact that you are not competitive is what is astounding to us. The fact that when Dan Rather has that incident with Bill Burkett and the forged documents, rather than other networks pouncing on a competitive basis to discredit a competitor like CBS, you all circle the wagons and start giving Dan Rather awards!

There is no competitive energy in acquiring news anymore. You might have a desire to be the first there, but I guarantee you, this blogger found pictures from three news agencies that showed basically the same stuff. Where is the competition? It is a nice try to try deny this. Now let’s add something else that has been alleged here — and by the way, Miss Carroll, here is another thing. There are a lot of people with doubts about this based on the experience that they have had with the Hezbos before. Based on the experience that everybody has had with terrorists and how they stage things to use you and others in the Drive-By Media to advance their cause. Where is your curiosity? If an allegation has been raised, if there is curiosity, why don’t you look into seeing if maybe you are being used.

Not with timestamps, but how about with corpses with rigor mortis? Have you heard this? You gotta hear this Mr. Snerdley. Michelle Malkin has it on her blog today. Another blogger. They won’t like that at the Drive-By Media. It’s been alleged in other places that some of the victims at Qana had rigor mortis. One of them, that little kid they passed around, dust covered, with the brand new, unsoiled pacifier. And it is said, some people are alleging that kid had rigor mortis. Now if rigor mortis set in, there’s no way that child could have been a victim of that event at that time. It had to be from some other. I mean, I have no clue. I don’t know where they got it. The corpse, but the fact that — by the way, I’m going to back this up in just a second with a most amazing exchange heard on CNN between Anderson Cooper and some people about how stunned they are at how anti-Semetic Hezbollah is.

They can’t believe why Hassan Nasrallah doesn’t soften his anti-Semetic rhetoric. It is stunning. You know, I look at the narrow focus of the Drive-By Media and I look at the things that surprise them, like men and women are born different makes the cover of time magazine — and the Hezbollah would be anti-Semetic, surprises them? The lack of curiosity all these people are exhibiting over what happened in Qana? The desire, the willingness, to eagerly stamp Israel as a bunch of war criminals based on photographers? You know, this rescue worker at the Qana event this past Sunday looks strangely like the same rescue worker in pictures from Qana ten years ago. So, my point is, Miss Carroll, there are countless reasons to be curious.

The first reason would be just innate human intelligence based on a full and understanding knowledge of who the combatants are here. We know who Hezbollah is. We know who is funding them. The fact that you have no curiosity, willing to accept what whatever is spoon fed. A so-called rescue worker holds up so-called corpse, ‘Look what happened! Look what Israel did!’ Bam! You take the pictures and run with it. To hell with the time stamps; that is not the point. The point is other broadcasts journalists have admitted to be led around by the nose, effectively being propagandized, and to deny that this is happening and to deny that the competitive balance, the competitive energy would see to it this does not take place, is just a bit of a stretch. 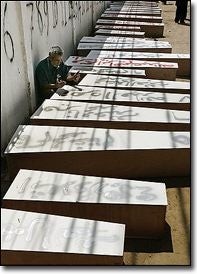 SNOW: The victims of that bombing in Qana — you’ll remember that happened over the weekend — those victims are being buried this morning in a mass grave.

RUSH: The Hezbos must be done parading them around then if it’s time to throw them in a mass grave, these babies. I haven’t seen any photos of that, but obviously ABC knows about it. She is reporting live from a park in Beirut. (interruption) Are you asserting that maybe they haven’t been thrown into a mass grave? That the Hezbos are saying that we’ve done that? Well, there may be some pictures that will pop up. We’ll keep a sharp eye. We have passed words, necessary protocol, to get into some of these news agency web sites where the still photos are posted and stored. At any rate, mass grave, why do you think this is, folks? Why do you think, first place, if nobody has seen it, the Hezbos had to announce it. If the Hezbos had to announce it, that they’ve mass graved the victims of Qana, why do you think so? “Because it’s so war torn, there’s so much violence they don’t have time for proper burial because of the Israelis and Bush’s bombs.” That’s what I think is the undertone of this.
END TRANSCRIPT