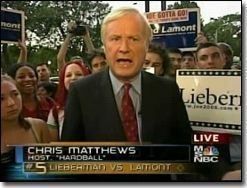 RUSH: This from Chris Matthews last night on his — well, it wasn’t Hardball, it was his election coverage on PMSNBC.
MATTHEWS: The body language of the two is so different. You have this very wasp-y fellow, Lamont, very calm, very casual, very St. Paul’s almost in the prep school sense, Lieberman of course is the schmaltzy ethnic guy, the Uncle Tonoose, you know, the guy that’s very much kind of lachrymose in his almost postnasal drip voice of his, but he doesn’t look happy.
RUSH: All right, now, “the schmaltzy ethnic guy, the Uncle Tonoose,” And as I said the last hour, Uncle Tonoose was a character on the old Danny Thomas show, and I think I’m pretty safe in saying that Uncle Tonoose is played by Hans Conried, huge hook nose and so forth. Here’s Matthews describing — let’s be honest about this, folks; let’s just put it out there. When you say somebody “is a schmaltzy ethnic guy,” you’re not talking about an Arab. You’re talking about a Jew. You just described somebody as a schmaltzy ethnic guy who has postnasal drip with his voice, lachrymose and so forth. Uncle Tonoose, in character, was a Lebanese Arab.
Danny Thomas was a Christian Lebanese, and Uncle Tonoose therefore, was portraying an Arab. But isn’t it interesting that you have Chris Matthews describing an Arab as a Jew, on the basis of appearance, schmaltzy ethnic guy. You know, there are some people saying this, but their dancing around it, but one of the little — or not often discussed aspects of the kook fringe base of the Democratic Party, I’m just going to put it out there, is anti-Semitism. There is so much anti-Semitism today in the Democratic Party.
I don’t think it’s an accident that Sharpton and the Reverend Jackson are up there standing behind Lamont during Lamont’s –by the way, what’s calm about Lamont? When I listen to these Lamont remarks from his acceptance speech last night, I hear somebody that’s just a couple octaves and a couple decibel levels below Howard Dean. Yeah, the only thing that’s missing is the scream. This calm waspy fellow, very calm, casual, very St. Paul in a prep school sense. That’s a way to relate to most of America, Chris. St. Paul, what the hell St. Paul? It was a person. St. Paul, it’s a prep school. Well, how many Americans actually go to prep school, particularly in the northeast? Ah, just a little bit of a side-bar.
BREAK TRANSCRIPT 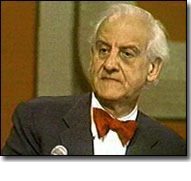 RUSH: Sort of fascinating, isn’t it? In the 2000 presidential campaign nobody at MSNBC, Chris Matthews, nobody else described Senator Lieberman as Uncle Tonoose, as a schmaltzy ethnic guy. Isn’t it amazing? So you go from Uncle Tonoose to Uncle Tom in six years in the Democratic Party. Welcome back, folks. 800-282-2882. El Rushbo on a roll. Mark in Bethesda, Maryland, you’re next sir. Nice to have you with us.
CALLER: Good afternoon, Rush.
RUSH: Hi.
CALLER: I am a speck of red in a sea of blue. Jewish Republican here, and I want to thank you for your continuing support of Israel.
RUSH: Thank you, sir.
CALLER: You’re welcome. I think it’s scary for all of my Democratic friends here that just don’t get it, especially with this Lieberman result yesterday. The party has been taken over; their party has been taken over by people that are anti-Israel, as in Cindy Sheehan and Soros, who happens to be a self-hating Jew.
RUSH: Right.
CALLER: They hate Israel. They hate Jews. They’re terrorism deniers, and I just hope this is a wake-up call to the Jewish people that are out there, is that still the best party for them?
RUSH: I doubt that that’s going to happen. It’s going to take a little bit more than this. The seat of this anti-Semitism right now is focused in kooks, like Sheehan and the blogs and the MoveOn.org people and Soros — and I’ll tell you, if you read letters to the editor from newspapers, which I do — This is part of the show prep. I love reading letters to the editor. Have you ever read the letters to the editor of the New York Times? You might as well be reading one of these kook blogs, and many of these people that write these letters are apparently Jewish, and they echo the same sentiments that the Sheehans echo, and I say, “Okay, what is it that’s the unifying force here?” and it’s hatred for Bush. It’s not hatred for Arabs.
It’s not hatred for Ahmadinejad or the Hezbos. It’s hatred for Bush. I don’t know what’s going to… I could say the same thing about the black population of this country. When are they going to wake up and understand the party they’ve been supporting does nothing but take them for granted? And doesn’t offer them any real solution, just uses them? I just don’t see it happening. I think it’s one of the most covered-up aspects of what’s happening to the Democratic Party, is how anti-Semitic and anti-Israel the apparent movers and shakers in that party are, and Lieberman is a living testament to it. I mean, let’s be honest. Let me ask you, Mark, I mean you said you’re a Republican Jew. How much do you think Lieberman owes his defeat to the fact that he’s just Jewish at this point in time?
CALLER: I don’t know. With the way that party is being taken over, probably some, because remember last summer what Cindy Sheehan said about Israel. So probably some of it.
RUSH: What did she say? Refresh my memoir.
CALLER: It says — here is the quote. “Get America out of Iraq and Israel out of Palestine and you’ll stop the terrorists.” So again, blame America, blame Israel.

RUSH: Yeah, exactly right. That’s true. Well, in fact, speaking of blame America; blame Israel, let me give you a little — thanks, Mark, for the phone call. I appreciate it. There’s a guy named Lawrence Wright who is a staff writer for the New Yorker magazine. He’s got a new book out, and the book is called The Looming Tower, which he calls, quote, “a bid to understand and explain the rise of Islamic extremism,” and in an interview with al-Reuters, the fake war photo guys, Lawrence Wright explains that American authors and filmmakers haven’t done enough to blame America for 9/11. Here’s a quote.

“I feel like it’s been a great failure of our artists and our writers that we haven’t done a better job at looking at ourselves and how we are and how our own behavior to some extent contributed to this tragedy, 9/11.” Our behavior? Yep. According to Wright, Americans lost sight of our core values, especially the rule of law and a code of decency. In other words, we, not the terrorists, we lack values, and we lack decency and respect for the rule of law. And, oh, yeah. The Islamic world perceives a pro-Israel bias in our Middle East policies. So it’s not just kooks, like Cindy Sheehan and the others. Here’s a New Yorker magazine writer — could very well be a kook — blaming us and our association with Israel!
He said, “When bin Laden attacked America, he was posing two questions to us. One is: ‘What is America and what does it stand for?’ and the other is: ‘What is Islam and what does it stand for?'” I’m not making this up. This guy’s got a book out and it’s all about how we’re to blame, and there aren’t enough artists and writers blaming America, doing articles, stories, movies, what have you, blaming America. The only question a rational person would ask, or associate with bin Laden, was whether we had the resolve to wipe his evil off the face of the earth. He didn’t think that we had that resolve anymore after Mogadishu is why he did this, because he thought he could get away with it, and so he was under the impression that we were cowardly, we wouldn’t take casualties and he could get away with this.
Now, these blue state Lamont liberals don’t have the will to do that, they don’t have the will to wipe evil off the face of the earth because they think we’re it. They think we are the evil. They blame us and Israel, while doing everything they can to understand terrorists. They don’t even have the sense to know that we’re at war, and if they admit that we’re at war, they don’t have the sense to admit who the enemy is because they consider us, their own country, to be the enemy. So when you say, “What’s it going to take for certain groups to wake up and smell the coffee?”
I, frankly, say there are certain people, liberals are liberals first. Others are what they are first, and the common enemy that they’ve always had is going to remain the common enemy, but I just don’t think there’s any question about the fact that one of Lieberman’s — how should I say? One of the factors in his defeat was the fact that he’s just Jewish right now. If you go to these blogs, if you spend any time reading them and the MoveOn.orgs and so forth, you’ll find some of the most anti-Semitic stuff on the face of the earth that you have read and anti-Israel stuff that you have ever read. Marvin in Detroit, I’m glad you called. Welcome to the EIB Network. Hello.
CALLER: Yeah, hi, Rush. Mega Detroit Tiger dittos.

RUSH: Thank you.
CALLER: From the beautiful blue state of Michigan.
RUSH: Thank you, sir.
CALLER: Hey, Rush, I was just wondering, what do you think, you know, if Lieberman does run as an independent, what’s the chance of maybe a Republican sneaking in there, and if they do, what is a simple majority in the election —
RUSH: Yeah. But it won’t happen. I think if Lieberman runs as an independent, the

Republicans might try to get a Republican in there to run just to, you know, cause problems. I don’t think the Republicans could sneak in. It’s too blue a state. That state is blue. I’m not sure it would be competitive. And if it were a Republican, it would be a Lowell Weicker type, may as well have a Democrat, it would be a Linc Chafee type that would win in Connecticut.
CALLER: Right. Who will run for the Republicans?
RUSH: In Connecticut?
CALLER: Yes.
RUSH: I have no clue. I only know ten.
CALLER: (Laughing.)
RUSH: Now, they’ve elected Republican governors. I mean, it’s not impossible. Nothing is, and, you know, it’s still early. I mean, as we know, things happen at a breakneck pace in politics, and they’re always, as most things in the future are, unpredictable. Anything could happen here. I don’t want to lock myself in to saying that no Republican could win. The Republicans aren’t going to nominate anybody. In fact, I think the thing you look at as far as Republicans are concerned in Connecticut is, how does this end up helping Republican congressional incumbents, like Chris Shays and Rob Simmons? This result, no question, boosts their chance of holding on to their districts, and they’re vulnerable right now according to polling data. The Democrats have to win these two seats in Connecticut if they have any chance of taking back the House. This result, I think, helps these two Republicans hold onto their seats.