“The deep freeze that has destroyed some $1 billion worth of California’s citrus…” Folks, we heard about all of the problems with this regarding the price of citrus that’s going to go up three to four times. It’s going to cause windfall citrus profits, or maybe taxes as well on them. By the way, did you see Apple? By the way, they’re Apple Incorporated, now. They dropped “computer” from their name. They’re just Apple, Inc. First quarter net Income: seven billion; profit, one billion. That in one quart quarter. Are we going to get windfall profits or taxes on Apple, just like we should get it on citrus? That’s just a little aside. But get this: “The deep freeze that has destroyed some $1 billion worth of California citrus could also mean months of unemployment for thousands of [quote, unquote] farm workers, packers and truck drivers during what is already a lean season for those who work in agriculture, industry officials say. The bad news was already trickling in Wednesday at Harris Farms, a 7,000-acre operation about 25 miles east of Fresno.

“‘All of my sisters-in-law, my mother-in-law and my brother-in-law just got laid off from the packing sheds,’ said Valentino Mexicano, a ranch hand whose family of five lives in nearby Sanger. He and other members of the farm’s night crew were just getting off a 15-hour shift monitoring miles of orange and lemon trees. ‘It’s bad,’ he said. ‘People are just going to be looking for little jobs to survive because the bills won’t wait.'” Okay. This is really bad, because these people are the people “doing the jobs Americans won’t do,” right? And now their jobs are not there because they’ve been frozen out. So apparently we’re going to have a bunch of unemployed illegals. Will they get employment benefits? We might find a way to make that happen. All right, it’s time to get a little global warming business, folks, and I’ve been patiently waiting for enough stories to accumulate here so as not to be doing this every day, but we’ve seen the ice storms. Texas is bracing for another one. There are people dying from ice storms, snowstorms. We’ve had snow in Malibu!

Today or tomorrow is the 30th anniversary of the first snowfall in south Florida. It even snowed over in the Bahamas! I t was snowing in Miami Beach 30 years ago. (Do the math if you want to know what year that was. I don’t have time.) So it’s snowing out in Malibu, a little dusting here; they’ve had to close the grapevine on I-10 in the higher elevations. It’s freezing. The first day of the Bob Hope Chrysler Classic was yesterday. Do you know what the temperature was when they teed off? At 8:30 in the morning it was 27 degrees and they had to delay the tee-off because of frost on the fairways. Ice on the fairways! Now, you can talk to me all you want about the warm weather that you’ve had in the Northeast, but what is it today, and what’s your forecast for the foreseeable future? We have all this gobbledegook of global warming going on out there. 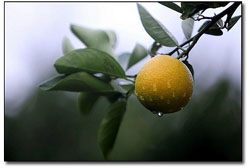 It is continually absurd. Now we’ve got Pelosi intent on putting global warming atop the Democrat agenda as though it hasn’t been. She’s “shaking up traditional committee fiefdoms dominated by some of Congress’ oldest and most powerful members. She’s moving to create a special committee to recommend legislation for cutting greenhouse gases, most likely to be chaired by representative Edward Markey, a Democrat from Massachusetts, Democrat leadership aides said yesterday,” and Markey is a wacko. He’s advocated raising mileage standards for trucks and cars and SUVs. He’s one of the biggest critics of oil companies and US automakers, and here they go. A great piece in the Wall Street Journal as the environmental warming or global warming stack goes on. We interviewed this guy once, Bjorn Lomborg. Bjorn Lomborg is an environmental scientist who has been a vocal critic of the whole concept of manmade global warming.
We interviewed him once in the Limbaugh Letter. We got to him a little late. By the time he spoke to us, he was pure pro-global warming. I had to totally change tack in the interview. I’ll never forget it. But he’s back with a piece here in the Wall Street Journal, “Will Al Gore Melt?” His piece basically knocks a bunch of the “science” that Gore seems to promote, he just knocks it to smithereens, then makes the point that Gore is a coward. Gore will not appear with any scientist who disagrees with him! “Al Gore is traveling around the world telling us how we must fundamentally change our civilization due to the threat of global warming. Today he is in Denmark to disseminate this message. But if we are to embark on the costliest political project ever, maybe we should make sure it rests on solid ground. It should be based on the best facts, not just the convenient ones.

“This was the background for the biggest Danish newspaper, Jyllands-Posten, to set up an investigative interview with Mr. Gore. And for this, the paper thought it would be obvious to team up with Bjorn Lomborg, author of ‘The Skeptical Environmentalist,’ who has provided one of the clearest counterpoints to Mr. Gore’s tune. The interview had been scheduled for months. Mr. Gore’s agent yesterday thought Gore-meets-Lomborg would be great. Yet an hour later, he came back to tell us that Bjorn Lomborg should be excluded from the interview because he’s been very critical of Mr. Gore’s message about global warming and has questioned Mr. Gore’s evenhandedness. According to the agent, Mr. Gore only wanted to have questions about his book and documentary, and only asked by a reporter. These conditions were immediately accepted by Jyllands-Posten. 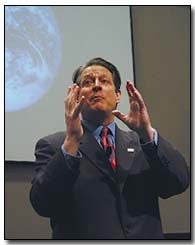 “Yet an hour later we received an email from the agent saying that the interview was now cancelled. What happened? One can only speculate. But if we are to follow Mr. Gore’s suggestions of radically changing our way of life, the costs are not trivial.” We need to ask hard questions. I’m not going to read the whole thing. We’ll post a link to this. Well, I think it’s a subscriber site. I don’t have time to read the whole thing, but Mr. Lomborg and his coauthor here Fleming Rose, just do a great job via common sense — not a whole bunch of scientific facts, figures, and stats. It’s common sense. There’s some of that (science) in there, just nuking what Gore is out trying to say and pointing out how he is attempting to mislead the gullible. Let me just give you one paragraph, here.
Al Gore “considers Antarctica the canary in the mine, but again doesn’t tell the full story. He presents pictures from the 2% of Antarctica that is dramatically warming and ignores the 98% that has largely cooled over the past 35 years. The U.N. panel estimates that Antarctica will actually increase its snow mass this century. Similarly, Mr. Gore points to shrinking sea ice in the Northern Hemisphere, but don’t mention that sea ice in the Southern Hemisphere is increasing. Shouldn’t we hear those facts? Mr. Gore talks about how the higher temperatures of global warming kill people. He specifically mentions how the European heat wave of 2003 killed 35,000.
“But he entirely leaves out how global warming also means less cold and saves lives. Moreover, the avoided cold deaths far outweigh the number of heat deaths. For the U.K. it is estimated that 2,000 more will die from global warming. But at the same time 20,000 fewer will die of cold. Why does Mr. Gore tell only one side of the story? Al Gore is on a mission. If he has his way, we could end up choosing a future, based on dubious claims, that could cost us, according to a U.N. estimate, $553 trillion over this century,” and then authors say: Mr. Gore, you chickened out on us once. We’ll meet you anywhere to discuss your theories. The bottom line: Gore will not appear anywhere where there are critics, particularly scientific ones.
BREAK TRANSCRIPT

Stalinism, ultra-liberalism has even found its way to the Weather Channel! “The Weather Channel’s most prominent climatologist is advocating that broadcast meteorologists be stripped of their scientific certification if they express skepticism about predictions of manmade catastrophic global warming. This latest call to silence skeptics follows a year (2006) in which skeptics were compared to ‘Holocaust Deniers’ and Nuremberg-style war crimes trials were advocated by several climate alarmists.” 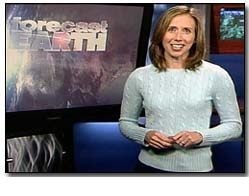 We’re talking here about Heidi Cullen, who is The Weather Channel?s host of a “weekly global warming program ‘The Climate Code,’ is advocating that the American Meteorological Society (AMS) revoke their ‘Seal of Approval’ for any television weatherman who expresses skepticism that human activity is creating a climate catastrophe. ‘If a meteorologist can’t speak to the fundamental science of climate change, then maybe the AMS shouldn’t give them a Seal of Approval. Clearly, the AMS doesn’t agree that global warming can be blamed on cyclical weather patterns,’ Cullen wrote in her December 21 weblog on the Weather Channel Website. (Note: It is also worth taking a look at the comments section at the bottom of Cullen?s blog, very entertaining.)”
This release, by the way, is put out by the US Senate Committee on Environment and Public Works. That is where I got this. She says, “It’s like allowing a meteorologist to go on-air and say that hurricanes rotate clockwise and tsunamis are caused by the weather. It’s not a political statement…it’s just an incorrect statement.” Note to Ms. Cullen: as a “climate expert” you should know that hurricanes in the Southern Hemisphere do rotate clockwise! She’s probably some innocent — I’ve never seen her. I don’t watch features on global warming because I don’t watch propaganda. I’m interested in truth, but here she’s writing that these people should have their certification stripped if they are skeptical of the “predictions”?
Finally, Prince Charles is going to fly to New York. He’s booking the entire first class and business class section of a jumbo jet for his 20-strong entourage. He’s doing this rather than take a private jet because he wants to have a smaller carbon footprint on pollution! The problem is, the business and first class sections are 63 seats; he’s only going to use 20 of them. It turns out — well, I’ll have to give you the details of this when I have more time, but this is another example of how these people think they’re smartest people in the world are lamebrain idiots when it comes to this kind of stuff.
BREAK TRANSCRIPT