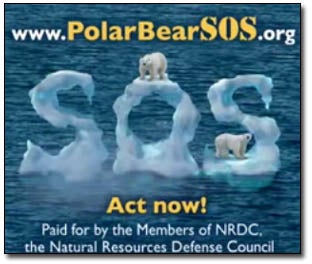 RUSH: I just saw something on CNN, and I laughed about it, but it burns me. You know the phony polar bear picture that’s out there with the polar bear supposedly on a melting glacier with nowhere to go? It’s out there in the middle of the Arctic Ocean, where there’s nowhere for them to go. It’s a hoax picture. It’s phony. It’s an ice floe created by the waves. The bears are out there playing around. They can get off it. They can get on it. They’re not ‘stranded.’ I just saw a fund-raising ad for the National Resources Defense Council with the two polar bears on that ice floe.