Tour Begins: The Breck Girl Sees and Feels the Poor and the Tubby

RUSH: I have some Breck Girl stories here about the poverty tour. First off, this was from four days ago. Chapel Hill is the dateline here. ‘Thursday marked the second postal scare in four months at John Edwards’ campaign headquarters in Chapel Hill.’ I think Edwards just needs to clue his staff in when the Avon products are arriving and they’ll get rid of half of these incidents, if not all of them. ‘Both incidents proved to be harmless, but for businesses in Southern Village, Edwards’ headquarters is becoming more of a nuisance. Businesses complain that they’re losing money. Some of them shut down for the day. Business owners told WRAL they’re tired of the scares and tired of the business day interruptions. One business owner plans to do something about it. Dr. Annelise Hardin is a pediatric dentist with an office on the same floor as Edwards’ campaign headquarters. She said she has had enough of bomb scares and evacuations. Her office plans to draft a letter to the building’s management expressing frustration about the loss of business. She is planning to get other companies in Southern Village to sign the letter.’

This is not that big a deal except this. When these people in Chapel Hill, North Carolina, are getting mad at the Breck Girl, you know you are in deep doo-doo. They ought to be so accommodating and understanding. I mean, the Breck Girl’s their guy. This cannot bode well for the Breck Girl. If his own supporters — and I’m basing the fact that they’re in the same geographic — and I know what Chapel Hill is. I mean, that’s not good news. By the way, our microphones were there when that poverty tour started today. We have that handy. We played it in the first hour. Here’s how the Edwards poverty tour actually started.

That’s how it started. Oh, what a great bumper tune to come up in the rotation. ‘Stupid Girl.’ Okay, the New York Times reports today that the Edwards campaign lined up more than 40 news organizations for the poverty tour and reporters and the Edwardses will travel in a chartered jet. They were on Good Morning America today to discuss the poverty tour at town halls. Nobody’s asking him about poverty. He’s making this a big issue and on Good Morning America today they didn’t ask him much about poverty; asked him about the war and other things. There’s a professor in this story. ‘Dennis J. Goldford, a professor of political science at Drake University in Des Moines, said most people who turn out to vote do not think of themselves as poor and do not identify with the message. ‘Even if they may be poor, many don’t think that they are,’ Mr. Goldford said. ‘They don’t think that he is talking to them.” 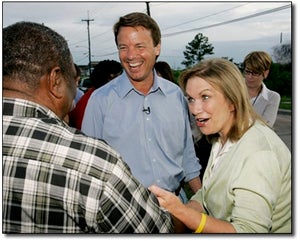 Now, this is another one, and this is a television station somewhere. Elizabeth Edwards says that the idea that gay marriage threatens heterosexual marriage is complete nonsense. Edwards reiterated her support during a speech in Sacramento, saying that she thinks there’s an undue fear of gay marriage. She appeared last month at a breakfast before San Francisco’s gay pride parade where she announced her support for gay marriage. The next day, her husband, the Breck Girl, said that his wife’s position surprised even him. The former North Carolina senator opposes gay marriage but supports civil unions, and his wife is out staying, ‘People that oppose it, they’re just afraid. They’re uncomfortable.’ John admitted he was uncomfortable around gay people. He’s back again, by the way. Here’s the headline: ‘Make Work Pay,’ Edwards says. Presidential hopeful John Edwards talked about poverty in a Good Morning America town hall from New Orleans, but none of the questions he gets are about poverty. He talks about it, but nobody asks him anything about it.

‘Painting himself as the populist among the Democratic candidates vying for the 2008 presidential nomination… Edwards was asked to share one solution to eliminating poverty. ‘If I had to pick just one, it would be to make work pay,’ Edwards said. Three ways to do that, Edwards said, are to raise the national minimum wage, increase the earned income tax credit and allow workers to organize unions and collectively bargain for better wages. … Asked about improving education, Edwards said that the government needed to make a bigger investment in early childhood education and give incentive pay to the best teachers, especially ones who worked in low-income rural and inner-city areas.’ Make work pay. We’ve already had our fun with that. You know what we need to do, here’s the line. We need to make work pay you what work pays Edwards.

I got these pictures here. He’s on the poverty tour. The first picture he’s on a street in the ninth ward, and he’s talking to a woman wearing an ACORN shirt, which is a liberal activist group. She’s pointing out nothing because there’s nothing there to point at. The hair looks great. He’s wearing cool little blue jeans, matching little light blue Oxford, sleeves rolled up, looks cool. Black loafers. This woman that he’s walking with is a tub. I mean, she is fat. This is a poverty tour. The next picture is of Edwards and his wife walking, no big deal there. She’s looking at him. He’s not looking at her. The next picture is Edwards watching and laughing while his wife talks to another resident of the ninth ward, another obese tub. The last picture is of Edwards, I swear when you look at this picture you will think that he’s got his hand on a part of her anatomy where it shouldn’t be, where the bra is but it would be hard to know because this woman is so big that… I mean, this is a poverty tour. Edwards is surrounded by fat people. I’m not making fun of them, don’t misunderstand, folks. I’m just saying there’s something about this that doesn’t work. We may have to do our own poverty tour.

You know people are going to get the wrong idea about this. We could do a poverty tour and cover much more ground than the Breck Girl, and that’s just have you people go out in the blue states. What we need to do is focus on blue state poverty, where the Democrats have been running these cities and running these towns where the leftists and the liberals have been in total control, and then send those of you who live out there, in those blue states and blue cities into areas that you consider to be underprivileged or whatever, and take pictures. Don’t do it yet because we got no way to receive the pictures, but then send the pictures, we’ll post them on our website and do our own virtual poverty tour and have far more impact, and point out where it is. Hate to tell you, but New Orleans has been run by Democrats for as long as there’s been New Orleans. Well, aside from when the French ran the place. But they’re probably a bunch of socialists, too, back then. Bottom line is that there is poverty out there, and we’ve had poverty program after poverty program after poverty program, and now we got a presidential candidate whose idea to solve it is to make work pay. Let’s listen to a couple sound bites from Good Morning America today. Diane Sawyer said, ‘The president says that you either think it’s lost or victory is still possible. Do you think victory is still possible?’ You got this question on Good Morning America on his poverty tour.