Variety: Era of Rush Limbaugh to Blame for the Writers Strike

RUSH: Not only am I the Man Who Runs America — you know it and I know it — I am now the man who has changed America, and as far as liberals are concerned, I have ruined it. I have ruined it for them. Liberals loved it, ladies and gentlemen, back in the old days, prior to 1988, 1990, when the Republicans had 135 geriatrics as members of the House of Representatives led by Bob Michel. The Democrats and the liberals loved it when Michel, half the time, didn’t even show up. Whatever the Democrats wanted, they got, sometimes the Republicans weren’t even let into committee meetings. No big deal, just go play golf, it was cool. There was no real opposition. Whatever the left wanted, they got. Those days are over, and they still do not know how to deal with it. You’ve heard this monologue many times on how the left had their media monopoly and they had monopolies in many other things in politics. Those monopolies have been busted. They now have to work for what they want, and they hate that. They despise it! They have power as a birthright. They shouldn’t have to fight for it. They shouldn’t have to convince you to vote for them. It should just happen, and it doesn’t any longer. 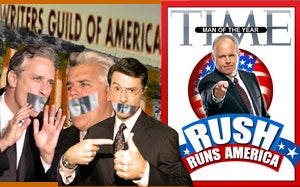 This most recent manifestation I am holding in my formerly nicotine-stained fingers. It is from Variety [the entertainment industry trade publication] and it’s by Brian Lowry. The headline of the story: ‘Strike Fight Rages on in a Bubble.’ This is about the writers strike, the Writers Guild of America, the Hollywood writers strike. The last time there was one of the things it was 1988, and it was long. But it eventually got settled. I’m not going to read the whole piece to you. Let me read to you just a couple of relevant paragraphs. ‘Amid the emotions surrounding the writers strike has been vitriol from some scribes toward any news outlet failing to echo their position — a ‘blame the messenger’ attitude vented at coverage by Variety, among others.’ See, right here is the truth. These scribes are upset that news outlets are not just following along against management, promoting the labor side of an issue like they always used to.

‘Scanning message boards and blogs uncovers all manner of allegations about kowtowing to corporate interests. … In this way, strike rhetoric is oddly mirroring modern politics, where partisans now filter straight-ahead reporting through an ‘us vs. them’ prism, seeking out accounts that buttress their views while shunning those that might challenge them. This represents a relatively recent dynamic, fueled by the Rush Limbaugh era of talkradio, cable news and the Internet, which barely existed during the last strike in 1988.’ That happens to be the year this program debuted. ‘It’s an especially poisonous environment,’ the Rush Limbaugh Era, ‘when applied to this fracas, since talent and the studios must eventually reunite once the saber-rattling and marching ends, whereas political combatants (or at least their public mouthpieces) are now locked in a state of perpetual warfare, the better to spice up the give and take on ‘Hannity &amp; Colmes.’ … In political extremes both sides eagerly play the victim, with conservative talk hosts and liberal bloggers self-servingly encouraging hostility toward ‘mainstream’ media while promising — in the same way some websites are pandering to disgruntled writers — the real story the corrupt old traditional media won’t provide.’ The rest of this is sort of hard to decipher.

The whole premise here is, I must admit, at first when I saw it, I thought, ‘This is absolutely nuts. They’re blaming me for it?’ Then I got to thinking, they may have a point here, as I was just saying. In 1988 and prior years, the left got whatever they wanted. There was no opposition. I mean, there was opposition, they didn’t get everything they wanted, but I mean it was pretty much rubber stamped, what they wanted to do. The way the media covered things was never challenged. What the media covered was never challenged. What they didn’t cover was never challenged. Now all those days are gone, and the left doesn’t know how to deal with it. That’s the reason for the anger in this country and that’s the reason for the partisanship. The anger and the partisanship’s not us. We’re just equal time. We’re just showing a different way. We’re just highlighting different news. We’re quoting people the Drive-Bys won’t quote. We’re actually telling you what liberals say. We play sound bites where you actually hear them say it.

In the old days, amnesty would have happened. In the old days, the wet DREAM Act would have happened. In the old days, Spitzer would have gotten his driver’s licenses for illegals. That’s why they’re mad. They’re not getting what they want. There is opposition. So there has to be somebody to blame for this. It can’t be them. It can’t be that their ideas stink. It can’t be that their ideas are unattractive. It can’t be that nobody wants what they want done. Can’t be that, their arrogance and elitism will not permit them to accept the fact that their ideas are no good. There has to be somebody to blame. And who is it? It is always me. I didn’t bother printing this out, there’s a climatologist, scientist out at University of Arizona who I highlighted. He’s written a book. He’s somebody that doesn’t go along with the consensus of science. The Arizona newspapers are castigating this guy simply because I highlighted his work and spread his work beyond the university and academic arena in which he worked. Once again, I am to blame. 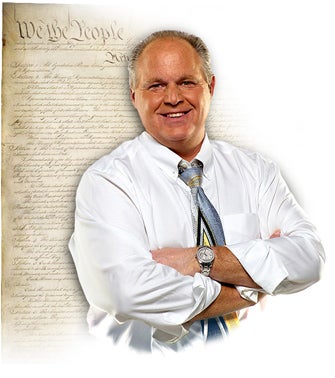 So, the way this works here, the reason I am to blame for the writers strike is that because the Rush Limbaugh era has created this perpetual argument that never gets solved, this constant bickering and partisanship, which never ends. It’s infected both sides, and so essentially what we have here is an argument over the issues in the writers strike, and they see no end to this because the fight is what it’s all about now, not the solution. There is a solution to all of this. If you people on the left will just realize how wrong you are, give up. But by the same token, we talk about principles and compromise. Well, when they talk about compromise, they conveniently leave out principle. Come on, you have to compromise, they always say that to us. Now we’re saying it to them. If you won’t compromise, we’re going to beat you. After all, that’s what they’re trying to do to us. They’re trying to beat us; they’re trying to ruin us; they’re trying to impugn us.

In the old days we just gave up, we didn’t mount much of a fight because we didn’t have the numbers, we didn’t have the power. Now we have a few more numbers, a little bit more power, and we’re not compromising on our principles. Well, some of us aren’t. It just boils them mad. They’re just enraged. Then they come out with this kind of stuff: Limbaugh responsible for the writers strike. May have a point. There may be some of this, not specifically about the writers strike, but the fact that the Limbaugh era of talk radio, cable news, and the Internet has presented an entirely new paradigm for the left to have to work in. Mr. Snerdley just asked me over the IFB, ‘Is there anybody upset over this writer’s strike?’ It’s an interesting question. Well, the picket line marches are going on, but I don’t see the public marching outside David Letterman’s studio demanding fresh shows. I don’t see people marching outside wherever they do the Jon Stewart show, demanding fresh shows. I don’t see anybody demanding fresh episodes of the stuff that runs at night in prime time.

Now, some of that stuff’s not gone into reruns yet. But the timing for the writers couldn’t be worse because all the popular series like Grey’s Anatomy, Prison Break, House, they’re doing part of the season in the fall, then quitting for the holidays, resuming the rest in February with no breaks ’til the end of the season in May. So reruns were scheduled anyway. A lot of people, on the other hand — this is not going to please the writers — but a lot of people, said, ‘Hey, if the writers are going on strike, that means the crud is not going to be on the air, and we might have an opportunity for some better stuff somewhere down the line.’ Liz Smith even raised my point last Sunday in the New York Post. ‘Wait a minute, how come Letterman and Leno and these guys write their own stuff?’ Why can’t they go on and do their own show? These are talk shows.

There are no writers here at the EIB Network. What I’ve just said to you has not been written, other than what I read from the non-striking writer at Variety. We have the CBS News division writers threatening to go on strike, too, and what’s going to happen to the reporters? By the way, I love writers. Writers are the heart and soul of things. I actually have a great deal of respect for them, in a movie, series television show, but talk shows, that’s a different thing. Needing 15,000 writers to do a half hour or a an hour talk show, we do three hours of a day here with no writers. Well, no producer here, either. At any rate, ladies and gentlemen, I single-handedly now have upset the equilibrium that the liberals used to have, and they’re striking out and blaming me. It’s gotten to the point now I am responsible for the friction between the screenwriters, the Writers Guild of America, and the producers in Hollywood.