Tell Us Which Pastor Wright Sermons You Agree With, Senator

RUSH: I find something very interesting. We’ve had two calls today, and I am certain we will get more, from people who say that they don’t hear anything wrong with what we have played from the sermons of the pastor of Obama’s church in Chicago, Jeremiah Wright. Let’s listen to this one again. This is a sermon from 2001 shortly after the 9/11 attacks.

WRIGHT: We bombed Hiroshima, we bombed Nagasaki, and we nuked far more than the thousands in New York and the Pentagon, and we never batted an eye. We have supported state terrorism against the Palestinians and black South Africans, and now we are indignant because the stuff we have done overseas is now brought right back into our own front yards. America’s chickens are coming home to roost. 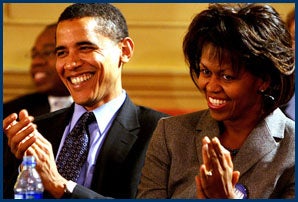 RUSH: Okay. Now, let’s examine this within the context of modern-day politics. We’ve had people call and they don’t hear anything wrong with what the pastor is saying. Ladies and gentlemen, what is the thrust of the Obama foreign policy as stated to date? See, I think because of the way Senator Obama’s responding to this bunch of video and audio of his pastor that’s out there, gives us an indication what his foreign policy is. What we just heard from Jeremiah Wright is pretty close to what today’s Democrat Party believes. All through the past five years during the war in Iraq, what have we heard from various Democrats? That our reputation in the world’s gone south, our reputation’s horrible, this kind of stuff we’ve brought on ourself. We deserve this. We gotta go around and we gotta talk, we gotta get a new president, we gotta talk to these people around the world and let them know that we’re not the bad apples that they think we are. We’ve just got one rotten guy, that’s Bush — well, two, and Cheney.

All Obama would have had to say, if somebody asked him specifically about this comment from his pastor, all Obama would have had to say is, ‘Well, that’s why I want to be president, because there are more Americans who think this than is healthy. I want to be president so I can straighten this out. It’s not healthy for as many Americans to think this as do.’ Speaking of nukes, he could knock it out of the ballpark with that. He wouldn’t endorse it. He would say, ‘I’m sad to hear this. I’m sad to know so many Americans think this is true. That’s why I want to be president.’ But instead, what does he do? He goes into one of these answers as though Mrs. Clinton’s got his testicles in a lockbox, he starts pussyfooting around, doesn’t say anything, which, as a voter and as an American, makes me think, makes me ask, ‘Perhaps Obama agrees with the guy on this, too.’ Maybe Obama does think that we are the evil in the world. Maybe he believes that the United States is the problem and not the solution. Maybe he agrees with this pastor. That’s why I want to know from Senator Obama, don’t tell us what you don’t agree with that your pastor has said. Please tell us what you like that he has said. It would be very easy to do, would it not? Just tell us what he said that you agree with.

Wall Street Journal today, Ronald Kessler: ”Obama and the Minister’ — In a sermon delivered at Howard University, Barack Obama’s longtime minister, friend and advisor blamed America for starting the AIDS virus, training professional killers, importing drugs and creating a racist society that would never elect a black candidate president. The Rev. Jeremiah A. Wright Jr., pastor of Mr. Obama’s Trinity United Church of Christ in Chicago, gave the sermon at the school’s Andrew Rankin Memorial Chapel in Washington on Jan. 15, 2006. ‘We’ve got more black men in prison than there are in college,’ he began. ‘Racism is alive and well. Racism is how this country was founded and how this country is still run. No black man will ever be considered for president, no matter how hard you run Jesse [Jackson] and no black woman can ever be considered for anything outside what she can give with her body.” That’s two years ago. ‘Mr. Wright thundered on: ‘America is still the No. 1 killer in the world. … We are deeply involved in the importing of drugs, the exporting of guns, and the training of professional killers … We bombed Cambodia, Iraq and Nicaragua, killing women and children while trying to get public opinion turned against Castro and Ghadhafi … We put [Nelson] Mandela in prison and supported apartheid the whole 27 years he was there. We believe in white supremacy and black inferiority and believe it more than we believe in God.’ His voice rising, Mr. Wright said, ‘We supported Zionism shamelessly while ignoring the Palestinians and branding anybody who spoke out against it as being anti-Semitic. … We care nothing about human life if the end justifies the means…’ Concluding, Mr. Wright said: ‘We started the AIDS virus … We are only able to maintain our level of living by making sure that Third World people live in grinding poverty…’

All right. You can chalk it up to the black experience, but what he’s doing when he makes these hate-filled, racist remarks is literally dispiriting and destroying the opportunity for anybody who hears him and believes him to become a full-fledged participating American. He’s creating and sustaining, like so much of the race business does in this country, so much in the civil rights movement does, a second-class population with just enough money to give to the church, but not enough money to be independent from some sort of government assistance, which equals a vote for a Democrat. Started the AIDS virus — ‘But, Rush, that’s what they believe, you gotta deal with it.’ That’s what Obama should say. Obama should come out and say, ‘Well, too many people believe this. I agree that it’s a problem. That’s why I want to be president, because it’s unhealthy for this many Americans,’ but I’m not sure he thinks that. I’m not sure, based on this guy going to this church for 20 years and listening to this pastor, I’m not sure that this candidate doesn’t disagree, because it would be so easy to deal with this and be done with it, but he’s not doing that.

You want to hear a bit of irony? I bet you haven’t heard this. It’s a Reuters story from the Times Online in the UK. Headline: ”John McCain Told to Dump Spiritual Guide in Row Over ‘War’ on Islam’ — John McCain, the presumptive Republican presidential nominee, has been called upon to renounce a church leader he considers his spiritual guide for urging a Christian war to destroy the ‘false religion’ of Islam. A number of prominent US weblogs demanded he reject the support of Reverend Rod Parsley, of the World Harvest Church of Columbus, an influential televangelist and political figure who campaigned alongside him in the run up to the Ohio primary. On February 26, a week before the Ohio vote, Mr. McCain appeared at a campaign rally in Cincinnati with the evangelical pastor, who praised the candidate as a ‘strong, true, consistent conservative’. With Mike Huckabee, a Baptist preacher, then continuing to snap at his heels, Mr. Parsley’s endorsement was a boon to Mr. McCain’s efforts to knock out his last remaining challenger and win over social conservatives. Standing side-by-side with the minister, Mr. McCain hailed him as a ‘spiritual guide.”

RUSH: Cristina in Chico, California. It’s nice to have you with us. Hello.

CALLER: Thank you, Rush. It’s nice to be here with you, too.

CALLER: Is it okay for me to make one comment, before the original reason I called?

CALLER: I was just going to say that as a churchgoing person that I would never allow someone to be my spiritual advisor unless I agreed with their integrity and their view of the world and that we shared the same views and moral character and I was in agreement with them. I could never let someone advise me…

RUSH: That’s the scary thing. I’ve got a story here from the Chicago Tribune, from January 21st of 2007, like 15 months ago. ‘Barack Obama visited the church in 1985 as a community activist. He was not a churchgoer at the time, but he found himself returning to the sanctuary of Trinity United. In Jeremiah Wright, he found both a spiritual mentor and role model.’

CALLER: Yes. For whatever he says about his disagreements, I don’t believe it. It’s insincere, and it’s just not believable to me. So, I think he could be (garbled).

RUSH: That’s a good point. You’re not going to have to somebody as a spiritual advisor that you don’t agree with.

CALLER: I don’t know how you could do that. And then the other reason I called is just having been in churches and having pastored with my husband, as a 501(c)(3), you are not allowed from the pulpit to make any kind of political statement.

RUSH: But, you know, this has been looked at and winked at for I don’t know how many years. How many times have Democrats gone into the church — Clinton did it — and raised money in there, during —

RUSH: I don’t know if the other side’s been allowed in the Trinity United Church of Christ, I don’t know.

CALLER: I don’t, either.

CALLER: I just found it interesting.

RUSH: Cristina, thanks for the call, I appreciate it.