RUSH: Ladies and gentlemen, before we get into the political news of the day, I want to play for you something that happened this morning on the White House lawn; the largest welcoming ceremony ever in the history of the White House for Pope Benedict XVI. We have audio sound bites of the president’s greeting to the pope, the pope’s response, and I saw something that genuinely moved me. I was sitting here staring at this and listening to this, and I was just blown away by it. Two things happened. The event and the music itself moved me like I haven’t been moved in quite a while, and the setting where it took place and the reason that it was happening. I mean, I’m sitting here thinking, divine intervention today at the White House. 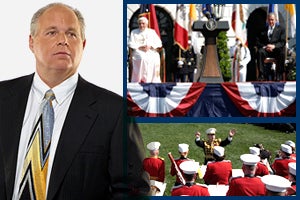 The Battle Hymn of the Republic was sung by the US Army Chorus, and you have to hear this, particularly if you haven’t had a chance to have your TV on today or your radio, and you didn’t hear this. You have to hear it and you have to imagine a crystal-blue sky, a crisp day in Washington, the pope and the president on the reviewing stand with others, the camera occasionally focusing on the US Army Chorus. You realize, this is at the White House, and a song written in tribute to God is being played at the White House. In this country there has been such an effort, and it has been way too successful, to remove God from anything public. Not only was God present, but the largest White House welcoming ceremony ever participated in a ceremony thanking God and respecting God and offering up a tribute to God, and you just have to hear this. It runs about 4:47. It’s infectious, so well done. The US Army Chorus, The Battle Hymn of the Republic.

(playing of The Battle Hymn of the Republic)

RUSH: That is just beautiful. I’m at a loss for words to describe the impact that had on me, and I was not even paying close attention. I was looking at the computer and I had the TVs on, which are to my left when I’m sitting at the computer. I heard this start, and I told Cookie up in New York, ‘Get me the song. I want the song as part of the audio sound bites.’ She said, ‘You can hear it?’ I said, ‘I can always hear God’s music.’ The Battle Hymn of the Republic, that’s the US Army Chorus, and that was at the welcoming ceremony for His Holiness, Pope Benedict XVI at the White House today. Again, the largest welcoming ceremony in the history of the White House. Here’s a portion of President Bush’s remarks.

RUSH: This is just fabulous. This is exactly what this country needs at this time. It took the arrival of Pope Benedict XVI to bring forth a discussion — a discussion I have been so desirous that happen at the highest levels of our elected leadership, a discussion of American exceptionalism. 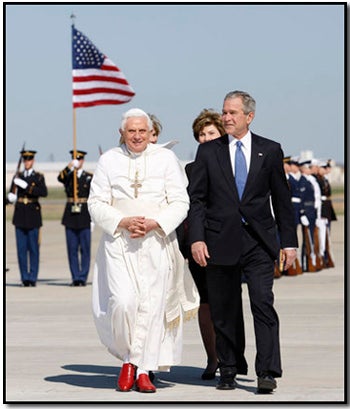 POPE BENEDICT: From the dawn of the republic, America’s quest for freedom has been guided by the conviction that the principles governing political and social life are intimately linked to a moral order based on the dominion of God the Creator. The framers of this nation’s founding documents drew upon this conviction when they proclaimed the self-evident truth that all men are created equal and endowed with inalienable rights grounded in the laws of nature and of nature’s God.

RUSH: And one more.

POPE BENEDICT: All believers have found here the freedom to worship God in accordance with the dictates of their conscience, while at the same time being accepted as part of a commonwealth in which each individual and group can make its voice heard. As the nation faces increasingly complex political and ethical issues of our time, I’m confident that the American people will find in their religious beliefs a precious source of insight and an inspiration to pursue reasoned, responsible and respectful dialogue in the effort to build a more human and free society.

RUSH: And he continued on, and he ended it by saying God bless America. He’s a big fan of America, Joseph Ratzinger is his prepapal name. He’s from Germany, as you can tell. But it was just uplifting to me. I take this stuff personally. I love this country. I love anybody else who loves this country, and I don’t care who it is that requires or necessitates or creates this discussion, gets it started, of the concept of American exceptionalism, whether it’s the pope or whether it’s somebody else. But I really wish that some of our own elected officials in power, leadership positions, would have the guts to speak of it in that context rather than wringing our hands and whining and moaning about how hard we have it and how horrible things are and how unfair life is and all the other things that people have become comfortable whining about. Thanks to the pope and the president today for this remarkable, remarkable ceremony at the White House.

CALLER: I wanted you to know that your emotions this morning at hearing The Battle Hymn of the Republic were shared by president Abraham Lincoln at the time of his Gettysburg Address in 1863. An Army captain who had been a prisoner of war in the Civil War had gotten together a male chorus and went around singing at fundraisers, and when Abraham Lincoln heard it, his eyes welled with tears and he shouted, ‘Sing it again!’

RUSH: I kept singing it myself over and over here for the rest of the time. Really, I was singing the chorus over and over again. In addition to everything else that it is, it’s infectious.

CALLER: Well, did you know this bit of trivia — and I will let you get on to more important calls — Julia Ward Howe wrote that in one evening in her hotel room after someone suggested she revise the original poem John Brown’s Body, the abolitionist song, she wrote all five verses of this beautiful Battle Hymn of the Republic, and sold it to the Atlantic Monthly for five dollars. 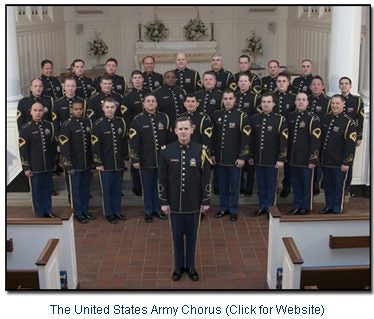 CALLER: It was printed in the Atlanta Monthly for five dollars.

RUSH: Well, that is what it is. There’s something poetic even about that.

RUSH: Thank you. You know, folks, I’m an emotional person, but I don’t express it publicly on this program much. It’s tough to do. Not hard, not difficult to do, I mean I have no problem doing it. It’s just coming up with the right words to reflect the way this hit me today emotionally as I was watching it, the timeliness of it, the brilliant performance, the perfection of the voices and the articulation, the musical accompaniment, the shots of the pope and the president watching in awe, listening in awe. The whole package, you watched it, you couldn’t help but be profoundly moved by it, given all that is happening in the country and the world today. It was powerful and there were lots of meanings, and some of them subtle and some of them just blaring. It had it all. This ceremony today had everything in it, and they moved from one item to the next, was not overly long, each element was bam, bam, get it, move on to the next. You were exhausted at the end of it, even though there was no frantic energy during it. Just brilliant. It was brilliantly conceived, flawlessly executed from start to finish.

RUSH: I gotta play this for you again. We did this to open the program today. The welcoming ceremony for Pope Benedict XVI at the White House today, the largest welcoming ceremony in White House history, and it was just breathtaking. A crystal-clear blue sky, crisp day in Washington, DC, just gorgeous, the pope and the president up on the podium, welcoming speeches have been made, and then it was time to turn to the US Army Chorus, one of the most moving and touching, powerful, beautiful renditions of The Battle Hymn of the Republic that I have ever heard. It stopped me in my tracks of show prep today to watch this. I wanted you to hear the full version of it, God in Washington today.

(playing of The Battle Hymn of the Republic)

RUSH: Wow. I got goose bumps listening to it again. American exceptionalism celebrated in Washington today with the arrival of Pope Benedict XVI. That’s the US Army Chorus, the United States Army Chorus with one of the most profoundly gorgeous and beautiful renditions of that song, The Battle Hymn of the Republic, that I have ever heard, and I wanted to share that with you again. I’m sure C-SPAN will be replaying this. No network would replay this. Fox carried it live, but I don’t think the networks are going to repeat this portion of it live. I don’t know if it moved them or not. It’s nobody talking, there’s no news being made, except to me. I think it’s huge news. In a presidential campaign which focuses on the rotten nature of the United States; the rotten nature of certain citizens; on the hopelessness that we all supposedly face; the fact that America is despised and hated around the world; that our reputation is in tatters; that our economic situation is bleak; that people are being thrown out of their homes every day; that they cannot afford food; they can barely afford gasoline; interest rates are plummeting, which is bad for seasoned citizens who live off the income of their portfolios. Everything is just rotten to the core. There’s nothing about which to be happy in the United States of America.

This is the theme day in and day out throughout the presidential campaign. It has been the theme day in and day out of media coverage for the last six years. It has been the theme of liberal messages to this country via the media and the Democrat Party for as long as I have been alive, albeit a short interruption in that when the Clintons were in the White House, then of course everything was hunky-dory and rosy. Amidst all of this pessimism, amidst all of this, the US military can’t win in Iraq, that we have basically surrendered, that there is no threat to the United States other than our own hubris and arrogance. Amidst all of this, Pope Benedict XVI arrives today, and in his remarks, praised the United States of America, blessed America, spoke of its greatness, traced to our founding and our Founding Fathers and our nation’s acknowledgement that we are what we are and who we are for one reason, and that is God. Amidst all of this negativism, pessimism, today American exceptionalism was the focus at the White House, long overdue and punctuated by this dramatic and goose bump-inspiring, chill inspiring rendition of The Battle Hymn of the Republic by the US Army Chorus. Also, Kathleen Battle led a group singing of happy birthday to Pope Benedict XVI today, and that was beautiful. One of the classiest and one of the nicest renditions of happy birthday I have ever heard. Just a great event. Didn’t last long, but it was powerful.