Pedal to the Medal: It’s Time to Flood Congress with Calls, E-mails

RUSH: Folks, you know, I very seldom — as you well know for 21 years — encourage phone calls and e-mails and letters to members of Congress. The reason that I don’t do it is that I never want the charge to be leveled that whatever response you gave was not genuine, that you had been talked into it or motivated and inspired or manipulated into doing it. I think it is pedal-to-the-metal time, and even if you have been e-mailing and faxing and calling, I think it’s time to intensify it. You call the local offices. You call the Washington office of these people, the Democrats and so forth. The Republicans are like Martians: They can’t stop this. The Martians couldn’t stop it, the Republicans can’t stop it. Not with votes. They don’t have the votes to stop it, but you can. The only reason we are where we are now is because of you, the American people. That’s the truth of the matter. I normally don’t do this, but time to throw down the gauntlet here and really ratchet it up, to go along with all the other pressure that is being brought to bear elsewhere throughout the rest of the media.

RUSH: Now, I have done this one time. I have actually given out a phone number in Washington one time. It was during the nineties. I was in New York and Steve Roberts was doing what was to be a cover story on me for US Snooze &amp; World Report. Steve Roberts, the husband of Cokie Roberts. And the question came in, ‘You’re always having people call Washington and you’re always telling them to do this and do that.’ I said, ‘No, no, no. I’m not part of that crowd.’ I said, ‘You want me to show you what happens if I do it?’ He said, ‘Yeah.’ ‘Okay. Today I’m going to give out a phone number and you watch what happens.’ I gave out a phone number and the place shut down. Just to demo. It was a big deal, too, because I never wanted to be able to offer the libs and the Democrats the opportunity to say that the effort was illegitimate because it was manipulated by me. But it’s time to go all out here.

RUSH: Well, something very interesting is happening. I’ve had two reports on this. I have not had a chance to assign a staffer to actually do this, but apparently when you call the Senate toll-free number that I just gave out you get a recorded message urging you to support the health care bill and to call somebody, a member of Congress to say that you support the bill. I have not heard that about the House number. If this is actually true (and I’ve had two or three e-mails from people on this) I’m not really surprised. The Democrats run these places. They could put on these phone switchboard messages whatever they wants, I assume. The lines are busy. Some people are getting through and some people aren’t, but what you can also do is Google ‘Code Red.’ Just put in ‘Code Red.’ Just search for it. You’ll find a website link.

You go there, it’s a Republican site, and it will list all the undecided representatives. I think their phone numbers are there. You can call their local offices; you can call their Washington offices as well, directly. Those are not toll free numbers, I don’t believe. The switchboard numbers are. I’ve even got the SEIU number. You know, Obama has a number out there with the SEIU. It’s not identified as such. It’s a toll-free number to call. When you call that you get a big spiel about how great and wonderful the bill is, and then it asks you to get hold of your congressman and let him or her know. You press a number and they give you a number for your congressman. I’d avoid the SEIU ad because they’re only going to direct you to Democrats. Yeah, Koko is going to put the Code Red link right up on our website. So you’re not going to have to Google it. Just go to RushLimbaugh.com for the Code Red website and find these members and their names.

What a trick. (interruption) Okay, Brian just got through, and it does say that. You called the number, and they…? (sigh) What a bunch of tricksters. They’re misusing public telephone lines (laughing), which is nothing compared to the way they are genuinely shredding the Constitution in this. It’s lawless, it is unconstitutional, it’s illegal.

RUSH: The Politico, ladies and gentlemen, has noted that I have given out the Capitol Hill Switchboard number for only the second time in American history. For only the second time in American history, I have given out the Capitol Hill Switchboard number, and I’m urging everybody to call and ramp it up, ratchet up the pressure. Here’s something else. Something else I want you to be on the lookout for. If you do happen to get through to a member of Congress and that member of Congress tells you that he or she is undecided, that’s a delaying tactic. Demand an answer. Because the odds are that somebody telling you when you call them, ‘Well, I haven’t decided,’ they don’t want the grief that they would get if they tell you they’re going to vote for the thing. So try to pin ’em down, say, ‘What do you mean you’re undecided? It’s been going on for a year, how can you possibly be undecided? We want to know, are you going to vote for it or against it? We want you to not support it,’ whatever you tell ’em, but this undecided riff is a delaying tactic.

RUSH: Folks, if you’ll indulge me for just a second here, this is an example of the day. I just mentioned the Politico blog post saying that for only the second time in history that I urge people to call Washington and actually gave out phone numbers. The blogger, Michael Calderone, has written me a note and said, ‘Look, I know you’re busy, and you’re still on the air now, but if you have a minute when you’re done, I have a couple questions.’ I don’t. Michael, I really don’t have the a minute today when I’m done. So I’m going to answer your questions here on the air. Now, it’s gonna take away from your exclusivity, but one of the questions I already answered on the air today. ‘When was the other time? When was the other time that you urged this?’ It was when Steve Roberts of US News &amp; World Report was doing a profile on me way back in the nineties.

He was of the belief, like so many people believed back then, that all I was doing was giving out phone numbers of members of Congress and switchboards in Washington and he asked me why I did that. I said, ‘I don’t do it. I’m the one that doesn’t do it. I don’t use my show for activism.’ I said, ‘If I did it, I would shut the place down. So I’ll demonstrate it for you.’ So I gave out a number. I forget what it was about. I forget what the whole thing was. In fact I think I told people, ‘Look, I’m trying to demonstrate something to a reporter here what will happen if I give out the Washington switchboard number.’ So I gave it out and of course the switchboard was tied up for a half hour or so, people couldn’t get through. The same thing happened today at the two toll-free numbers I gave. Those numbers have now shut down.

You don’t even get a recording at them now. They’re invalidated. Nothing happened. So we had to give out the toll-free and the toll call numbers. (By the way, the toll-free number to the switchboard is 877-762-8762.) ‘Why did I feel it necessary to do it now?’ Because this is ballgame. This is ballgame. And Michael, the only reason we’re at this point is because the American people have stood up. The Republicans don’t have the votes to stop this, the Martians don’t have the votes to stop this (and Republicans may as well be Martians on this, given all their influence). All we can do is continue to have the American people let it be known they want no part of this, the substance of the bill, or the process. They don’t like it, and that’s why I am urging them to call, ’cause this is a transformation of our country into something that no one has ever seen it be like. We don’t want that transformation to take place. We like America as it was founded. We don’t want to turn it into a Third World country. 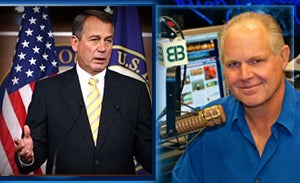 Why am I getting this question? Michael, why didn’t you call Pelosi’s office and ask: ‘Do you really think there’s a chance of changing your members’ minds?’ Apparently they’re up for grabs because they don’t have the votes. I, apparently, am not the one who has to change anybody’s mind. Pelosi is. Hoyer just came out and said they don’t have the votes. Pure and simple. One of the underlying aspects of the Democrats’ Hail Mary pass attempt to push this health care plan through is that if it passes, it’s the first time in American history the federal government will force every American to buy something whether you can afford it or not. Now, the Heritage Foundation has been making the point for months: there’s no constitutional or judicial precedent for such a power grab. None whatsoever.

If this bill passes, the Constitution’s carefully crafted limits on congressional power will have been reduced substantially. It’s an all-out assault here. Now, this is not what the Founding Fathers intended — and this is why, Michael, I’m trying to get as many people (for the second time in history) to call people in Washington and stop this. We’re dealing with a transformation of this country unlike anything we’ve seen before, and certainly not as it was founded. We did not elect people to overthrow the government. We did not elect people to reshape it or to remake it. They are stewards. The Constitution is the Constitution, and it doesn’t matter to these people, and it doesn’t matter to the people in the media. They don’t care. They don’t even care what the substance of this is. They’re just surprised anybody would oppose it.

‘Why, he’s a historical president. He’s our first black president! Why would you oppose this?’

They look at it from the prism of just a horse race.

‘Can Obama get this done? Can Obama win?’ Secondly, and almost just as important: ‘Can Obama beat the Republicans?’

RUSH: And welcome back, Rush Limbaugh and the EIB Network. The House of Representatives, I guess Congress in general, has put out a System Advisory saying: ‘House telephone circuits have neared capacity.’ This explains why nobody can get through their busy signals. The actual message: ‘Due to the high volume of external calls, House telephone circuits are near capacity, resulting in outside callers getting busy signals. If you have any questions, please call the technology call center,’ and there’s an 800 number here. (877-762-8762) (laughs) So… (interruption) No, no, no, I don’t want to give that number out. But people are writing me and saying, ‘We can’t get through.’ I know we can’t get through. That’s the whole point! Just keep trying. Nobody else can get through either. Now, I don’t doubt that a lot of members have their phones turned off and they have their mailboxes full.