RUSH: This coming Sunday night is The Family Guy episode starring me. The title of The Family Guy episode is ‘Excellence in Broadcasting.’ The premise is I am in town for a book signing. Of course I haven’t written a book in 16 years, but I’m in the town where this wacko family lives, doing a book signing, and the family dog, Brian, comes down to start giving me some grief, and I rescue the dog from some precarious situation. The dog becomes a big conservative, follows me around, actually gets more conservative than I am, starts calling me a weenie and all sorts of stuff. We taped this a year ago. It’s a half hour episode, I think, and it takes a year to animate these things. So it was a year ago, and I got an e-mail from Seth MacFarlane last night. Its premiere airdate is this Sunday, it’s 9 p.m. Eastern and Pacific Time.

Fox has released four pictures, four photos, cartoon stills from the episode. We put ’em at our Facebook page, Facebook.com/
RushLimbaugh. I looked at some of the comments that people have written and they run the gamut. ‘Rush, sorry you had to lower yourself to be on that program. I won’t be watching.’ ‘Rush, are you that hard up? You’re doing this for money?’ Well, I don’t even know what I got paid to do this. Whatever it is, it’s union scale. I didn’t do this for the money. I did this for the fun of it. I’ve been in a couple Family Guy episodes already and I’ve gotten to know Seth MacFarlane pretty well. Yeah, he’s a Hollywood liberal but we get along.

Seth appreciates and has a great affection for professionals, and we’re all professionals here. You know, this was hard work, too. We were in the sound booth for three or four days at four hours at a time. I even sing in this episode. I sing, but I sang a song that I’ve never heard before, and so I really don’t know what the melody was. I had to guess. And for Seth… It’s really interesting when I try to explain people, because they can hear me and I can hear them, and I can carry on a conversation. It’s tough for people to understand that I cannot distinguish music melodies if I’ve never heard it before. So he’s singing the song in a bunch of different ways trying to get me the melody.

I said, ‘Seth, I’m sorry. It all sounds like the same note to me. All I can do is imitate what I’m hearing you do.’ (singing) ‘I live in Republican town!’ That’s what it sounds like to me. I don’t know if that’s what the song really is. So I end up sort of talking it with my usual bravado and bombast and so forth. It was a lot of fun and it’s Sunday night. Fox, by the way, is bigger than this on their PR page. You have to scroll all the way to the bottom. It’s like 25 pages of PR on their shows coming up this week, and they’re burying it out there that it airs. And people ask me, Andrew Breitbart sent me a question: ‘Why did I have to look real hard to find out when this was?’

Probably because it’s pretty good. Family Guy has their own built-in audience. You know, it’s not everybody’s cup of tea. This program crosses a line every night that it’s on. It runs up to the border and goes over it. But I like Seth. I was offered the opportunity to do it, and it was a new challenge. And what the hell? I’m into the crossover. I’ll be happy to do it and see what happens. I know some in this audience don’t like Family Guy. You know, it is what it is. But they didn’t put any curse words or foul mouth in my script. You know, I am El Rushbo. I come out looking like a champ on this thing. So… (interruption) No, I’ve not seen it. (interruption) I don’t care what the edited version is. There was nothing in the script that I would want them to edit out.

RUSH: By the, the Family Guy promo now at the top of Fox’s website on their carousel. You know, somebody reminded me, ‘What, you do a Family Guy, Seth MacFarlane, Elton John? You’ve reached across the aisle more than the post-partisan Obama ever has!’ You know, that’s a pretty true observation out there. Another person said, ‘Rush, don’t worry. That song probably didn’t have a melody. There haven’t been melodies in music since the nineties.’ (laughing) You people in the audience are on a roll today.

RUSH: Ah! Ah! Thank you very much. He had a great knockdown with Debbie Wasserman Schultz last week on CNN. We have the audio. He made mincemeat of her. She still doesn’t know it.

CALLER: And we love him for that.

CALLER: My point is regarding your appearance on Family Guy and the criticism that you’re receiving.

CALLER: I would just like to remind your audience that you also received criticism in 1993 when you appeared in Playboy for an interview. 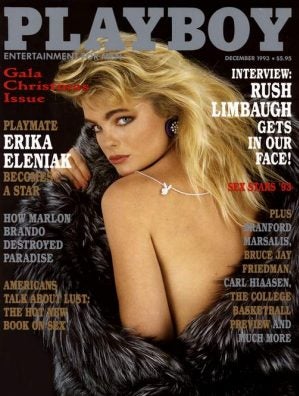 RUSH: Ohhhhhhh, yeah. That’s right. I had forgotten. I did get a lot of grief for the Playboy interview.

CALLER: And if I recall your comments at the time was based on the fact that you believed Jesus Christ himself would also appear in Playboy to go where the so-called sinners are.

RUSH: Yeah, Jesus said, ‘You go where the sinners are.’ That’s exactly right. You have a heck of a memory.

CALLER: Oh, yes. I also do remember a phone call that you had with a woman and she disagreed with you. She did not think Jesus Christ would go to be on a Playboy interview at all.

RUSH: Well, he might not have, but he woulda sent one of the disciples.

CALLER: (silence) But at the same time I think —

RUSH: You think everybody at the Loaves and Fishes was a believer? I mean, that’s the whole point. Jesus did go where the sinners were. He went into the belly of the beast. But that was just a play on words anyway. I had forgotten that. You know, who D. Keith Mano, M-a-n-o did the interview. He was a friend of Mr. Buckley’s. That’s one of the reasons I did it was they assigned him. Buckley did a Playboy interview, and the reason I did it was because Keith wrote for National Review. He tended conservative in things. (interruption) Who was the centerfold that month? Uhhh, I only read the articles. I… (sigh) Who was the centerfold. Megyn Kelly? I don’t know. Just kidding. I have no idea. I don’t know who the centerfold was. (laughing) Look, if you’re gonna ask me this stuff, I’m not in giddy move here. I had five hours with Hank Haney without a break yesterday. I had a 12-hour day yesterday counting flight time, coming back, and then instead of watching the football game last night, the Miami and the Jets. So I’m in a giddy mood. Thanks for the call out there, Adam. I appreciate it.

RUSH: All right. We looked it up. The centerfold in the Playboy issue in which I appeared as the interviewee (that was December, by the way, 1993) was Kirsten Gillibrand of New York. Kirsten Gillibrand, New York, was the centerfold. No, actually it was a woman named Arlene Baxter in December 1993. And during the break I went back. You can read the interview at Playboy.com. Here’s a little excerpt. Playboy: ‘Why are…?’ (interruption) Arlene Baxter? I have no clue. I really don’t know. I don’t know. You could probably find out, Dawn, at the Playboy website. Dawn’s asking me, ‘Is she blond or brunette?’ Anyway, here’s an excerpt from the interview.

‘Playboy: Why are you doing it?’ ‘Limbaugh: I decided to do this interview for two reasons. First, men and women of great stature have done the Playboy interview. It’s a forum that’s been accepted as a legitimate place for the dissemination of all points of view.’ (laughing) ‘Dissemination.’ They let that stand. ‘The second reason is I can think of no better place to have views such as mine, which are the epitome of morality and virtue, published in a magazine such as Playboy. As Jesus Christ said, ‘You go to where the sinners are,’ so here I am on the pages of Playboy attempting in what meager way I can to clean it up.’ That’s pretty much how it began. It was brazen — and, you know, in 1993, that was shock city.