Democrats and Unions Play for Keeps in Wisconsin Judge Election

CALLER: Hey, Rush. It’s a pleasure and a privilege.

CALLER: To finally get to talk to you. First-time caller — and, you know, 20 years ago when I used to see you on TV in my local area at night, I’m sorry, man, but I had to vote for Howard Stern over Rush Limbaugh, you know, when you’re about 23 years old.

RUSH: Well, we all make mistakes in our youth and profit from them.

CALLER: I would agree with you a hundred percent, sir, and I’ve been listening to you now faithfully for about two years and learned a ton. But anyways, I called mostly to let you know that I think the Republicans, if they expect to really get anywhere, in any of these states on any level of politics, they better get off their rear ends and start making the kind of phone calls the Democrats do. Because Sunday afternoon, I live in Wisconsin, and I received a phone call from somebody belonging to the Progressive Blah Bah Democratic Something or Other Party, and after I was done laughing at her introduction, I let her know that I would be voting for Mr. Prosser, and that I thought it was great and refreshing to finally have a politician like Mr. Walker who ran on a premise and decided to grab a hold of his pair and stand on that premise.

RUSH: Well, we have talked about this, too, the situation in Wisconsin. The phone call, by the way, that you got was one of millions (or hundreds of thousands) and it was enabled by nearly $3 million of union dues allocated to this campaign, $3 million.

RUSH: And your taxes, your state income taxes and other state taxes that you pay end up paying these people, who then pay dues to the unions, and those dues end up (at the end of the rail) in the coffers of the Democrat Party. But you’re right. We are, as Republicans, still not in the game. We have a different mind-set than the Democrats do. We try to win elections the old-fashioned way, and then we govern the old-fashioned way if we win. So what do we do? We engage in the standard, ordinary Campaign 101. We attempt to change minds and hearts and persuade people to vote for our candidates; and we win the election and we assume then that, “Okay, everybody involved understands: The people have spoken.”

That’s not how the left looks at this at all. The left does not contemplate, at the end of everything, losing. Losing an election is not the end of anything. It’s just the beginning of a new strategy, as you’re seeing in Wisconsin. I tell you, if you go back just two months, and you look at a primary election unaffiliated, Prosser wins 58-23%. Two months later, after the unions get involved with money and start their massive messaging campaign — that’s not countered! The Republicans are not in the messaging game, and the Republicans are not really in this campaign. They’re not spending a whole lot of money.

So they lose the PR game, lose the messaging game, and now we’re where we are: Might lose the majority in the Wisconsin state Supreme Court, simply because we look at this in a totally different way than they do. Basically the way the Democrats take a look at this is, “What rules? What laws? The only one that matters here is us winning at the end of all this. It doesn’t matter how,” because that’s all that animates them. Look, they’ve got much more at stake here. Their livelihoods — I mean, down to their purchase of eggs and milk — depends on their having their hands in the Wisconsin state treasury.

They don’t eat if their hands are not inside the Wisconsin state treasury. Well, our hands are not in the Treasury. Our livelihoods are not dependent on government money. (Well, some of us.) I mean generally we make our money in the private sector. We have real jobs and produce things, make things, service things, what have you. If our livelihoods depended on our fingers and hands being on the federal or state treasures, we might have a different attitude about it. But until — until — the Republicans in every state understand that the good old-fashioned Civics 101 rules are not going to win against Democrat union state public employee groups whose total existence depends on not only having their hands inside the state treasury, but controlling it, then we’re gonna keep losing to them.

CALLER: Thanks, Rush, and I tell you, “Be still my heart, I hope I can speak clearly here.” I live just west of the madness downtown, in Madison, and we just went through the Prosser election, and (groans) this is the Democrats’ tactics. Back at the end of the administration, Doyle and the Dems, when they lost, passed legislation that tied Prosser’s hands for raising money. He could only spend 300-some thousand dollars. They tied to it, if he did raise money, taxpayer money would then have to be donated to his opponent.

CALLER: Okay. Well, anyway, they have reported — not on the news, but talk show people — that there has been an over-count of at least 10,000 in Dane County alone.

CALLER: Well, yeah, what a shock. Well, his opponent, Green Party, works for the DNR, her creds are she is an environmental lawyer. And the tactics — I don’t know when our Republican friends are going to wake up. John Fund apparently warned Senator Fitzgerald after the primary in November that they needed to adjust the laws, create legislation the minute they got on the ground running in January. We have same-day registration. We have —

RUSH: Yeah, all of this, you’re absolutely right, and it’s all rules established by the Democrats to enable them to challenge elections that they lose and ultimately end up winning. We’ve talked about it. The Republicans simply don’t know how to play that game. They just don’t know.

RUSH: This Wisconsin Supreme Court election, the real question is, the other side engages in fraud so how do you combat fraud? Do you engage in your own kind to try to beat them at the fraud? Because the Wisconsin Supreme Court elections prove one thing: Democrats are unbeatable when election fraud’s unstoppable. And if no effort is made to stop the election fraud, and it wasn’t in this case, I mean prior to the fact, motor voter is election fraud. Same day registration, it’s fraud. It’s rife with fraud. And it happened in this Supreme Court election in Wisconsin. You’re allowed to show up and register to vote that day. Talk about eligibility and so forth. You can call it “Motor Voter,” any number of things, also agreeing to legislation that limits the amount of money your candidates can accept, and if they do accept it, your opponent has to — you know, Republicans, in most places don’t know how to play these games. Even after being victimized by them for so long, they still rely on the Civics 101, “Okay, we won the election, that’s it.”

Look at the difference. When a Republican wins the White House, what do the Democrats do? Threaten to filibuster Supreme Court nominations, shut them down, destroy the nominees personally, whatever they have to do to keep them off the court. I give you Robert Bork, Alito, Roberts, any number of people they tried to keep off the court. Ginsburg, any number of people. When a Democrat wins the White House, what do we do? We say, “Well, they won, they get their judges.” And we’ll throw up some obstacles at the circuit level, at the district level, but for the most part, you know — and, by the way, we ballyhoo it, because we’re so afraid the independents are not gonna react favorably to cheaters and to ideologues. So in order to not tick off the independents, we are the essence of nice guys. “Oh, yeah, the Democrats won, they get their choice.” In fact, we sometimes go out and praise — I’ll never forget, when Holder was nominated to be attorney general, conservative media types, intelligentsia praised the choice, all to be seen as the nice guy.

Now, this was in the aftermath of this election, and I guarantee you, Obama’s race silenced an entire party. The fact that he was the first black president candidate silenced everybody on the Republican side. There was no criticism of Obama and barely any criticism of what his policies were going to be. Then he gets nominated. Then he gets elected, and I remember after James Jones was appointed to some military position, national security advisor position, a bunch of Republicans woke up and praised the choice. “Why, if you woulda told me that Barack Obama would nominate somebody as responsible and,” blah, blah, blah, and I’m cringing. Why are you are going out of your way to praise the guy? How’s it gonna get you votes? How does telling everybody how great your opponent is help you? Now, I can understand showing a modicum of respect, but we go overboard on this. “Well, yeah, they won. They get their judges. They won, they get their attorney general.” We got a racist attorney general! We got a guy up there who says, “I don’t like the way my people are being treated.” What is that?

We’ve got an attorney general who made sure that the case against the New Black Panthers was thrown out because the civil rights division of his Justice Department has as a policy they’re not going to make defendants out of people of color. They’re just not gonna prosecute people of color. Not gonna make ’em defendants. But we still had people praising Eric Holder. Now, admittedly before he was doing all of this, and before he announced his decision to have what’s-his-face, Khalid Sheikh 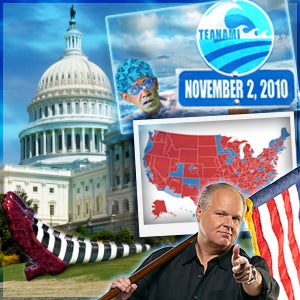 I don’t care what you think about what Trump is doing on this birther stuff, but one thing Trump’s doing is giving a lesson here on whoever the nominee is gonna be for 2012. You take it to these people. You take it to ’em. There’s a reason why Trump is showing up number two in presidential polls. He’s taking it to them. The Tea Party took it to ’em in November. The Republican Party simply can’t bring itself to do that. No, for some reason we have to be seen as nice because we think the independents will love us. We think if we’re not nice the independents will abandon us in droves. What are they gonna go to, the most mean, extreme political party in our lifetimes, the Democrats?