The American dream is at everybody’s grasp. It’s within everybody’s grasp, but it just depends on their own education, ambition, desire, passion, education, understanding, information, whatever. See, too many people are waiting around. They think that most people who have whatever it is they don’t have and would like to have, have it because somebody gave it to them or arranged for them to get it. And so they’re waiting for their turn. And when you have panderers like Kerry and Edwards come along, and say, “Well, elect us and we’ll see to it you got a better shot at it,” they’re not going to know enough of these people to have any direct impact on their lives whatsoever — and this is the fundamental argument between conservatism and liberalism, one of the fundamental arguments, and that is because of our freedom and because of our country, the way it’s established and set up and run, the American dream is there for anybody to give a shot and take a run at.

Doesn’t matter who the president is — and in fact in most cases, what you find is that people who don’t support a particular president work even harder when that guy is in office to overcome whatever obstacles that guy may put in their way. Rather than, “Well, I guess it’s over for me,” and give up, and then totally allow what happens in Washington to determine their individual future. Edwards said, “Your values are the values that built America: strong families, deep faith, and closely-knit communities.” Then he said — now, let me get to a descriptive paragraph before the money quote in this story. “A self-made millionaire trial lawyer when elected to the Senate in ’98, Edwards cited his own rise from humble origins as the son of a textile mill worker and a postal clerk mother in the small town of Robbins, North Carolina. He said, ‘My story shouldn’t be an exception, it should happen every day in America.'” Senator Edwards, it does happen every day in America. It happens countless times every day in America. What is this? What kind of ego is this that he thinks his story has only happened to him? Is he talking about the fact that not everybody becomes a 50-to-70 multimillionaire? Or that somebody rises from the ashes and becomes something? It happens every day. It’s what sets this country apart.

I mean, the idea these guys cannot take the attention off of themselves and make this campaign about themselves. They’re out there, all this talk, trying to make these different constituency groups think that these groups are going to be far better off with guys like Kerry and Edwards who are in Washington caring for them and caring about them, and then saying, trying to make them feel better, “Hey, look, what happened to me ought to be happening every day,” and it’s also then said that this guy — In fact, let me get the story so I don’t have to paraphrase this. Clinton in Paris actually said that he thinks that John Edwards “has an unusual feel for the life of ordinary Americans.”

I dispute that. He can’t possibly have — well, “unusual”? Well, wait a minute, wait a minute — unusual. Unusual could be. He’s so off base that it is unusual to look at ordinary Americans’ lives this way. I think Clinton may be right here and may not even know it because the idea that accessing the American dream, enjoying success however you define it, to think that’s unique in this country? It is what defines this country, and so he says, “My story shouldn’t be an exception. It should happen every day in America. In Robbins I learned about hard work, responsibility, family and faith, and today those values are still what brings families to Robbins, North Carolina. The only thing that’s changed is that the town’s 50% Latino.” This is such pandering. “You can get an enchilada at the Quick Check but those families came to Robbins for the same reason my family lived there.” So they didn’t go there for the enchiladas. They went there to work in a textile mill? It’s just unfortunate pandering. But it gives you an idea of the world view of these people. If you’re going to go talk to these constituency groups that they think are underprivileged and unfortunate and point to them, say, “Look at me! I want what happened to me to be happening every day in this country.” It is. It does, and to not know that and to give these people a false impression that the only way it will happen every day in this country is if you and your running mate get elected is disingenuous.

And it also is a phony premise and a phony promise, and contrary to giving these people hope, it robs them of hope because what they’re going to end up thinking is, ‘Well, I don’t have a chance if these guys don’t get elected.’ That’s the attempt. That’s what they want them to think. So out of touch? Yes. Unique? Well, we’ll get into that, too. When you do start to get successful in America, here’s the thing that you learn: There’s a price to pay for it. It’s called increased taxes. Some people in this country love to punish success by taking from those who earn the most and produce the most a disproportionate share because it’s ‘just not right they should have so much.’ 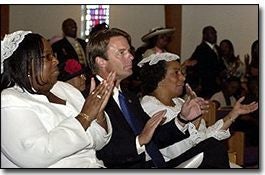 RUSH: From our separation-of-church-and-state file, ladies and gentlemen. ‘Democratic vice-presidential candidate John Edwards pledged from the pulpit of a black church on Sunday that the party will work hard to head off the kind of Florida ballot irregularities that Democrats assert gave the White House to George W. Bush. ‘We will get voters registered. We will get voters mobilized. We will get voters to the polls,’ the North Carolina senator told the congregation of St. Mark African Methodist Episcopal Church. A scant 537 votes delivered Florida and the presidency to Bush after a protracted legal battle resolved by the Supreme Court.’

The errors in that one sentence could send anybody back to journalism school for a two-year refresher course. ‘The race seems as close this year as then, and both parties have been working hard to prevail and win Florida’s 27 electoral votes.’

By the way, do you know that they actually had — I got a note this morning — there was actually sort of like a test vote in the House on this whole silly idea of the UN monitoring our election. Now, it went down to defeat, but guess what? I’m going to have to check. An astounding number of Democrats voted for it. (Rush’s coverage) An astounding number of Democrats voted in a losing effort. But they felt fear, they had to be on record as supporting this silly notion since it was advanced by Corrine Brown and others, Eddie Bernice Johnson and the Congressional Black Caucus. I’ll get the exact numbers for you. So here’s Edwards in a black church making political statements, separation of church and state. Let Bush go into a church anywhere and listen to the uproarious protests that results from it. ‘In five days of solo campaigning, Edwards has been reaching out to minorities, Hispanics in southern California, blacks in Orlando, as well as attending a round of fund-raisers in an effort to raise as much last-minute money as possible before the Democratic national convention of last week.’

So the myth that no black voters were counted in Florida in 2000 continues. The myth that blacks in the millions were denied the right to even get to the polls. None of those two things are true. The Supreme Court did not ‘deliver the presidency to George W. Bush.’ The Electoral College did. The media has conducted two separate recounts six-month surveys, if you will, of the votes in Florida and concluded that in three-of-the-four techniques used, and two of the four are lockstep, most common. The other two were fringe techniques that would never be used anyway. In three of the four, Bush wins! They went and counted votes throughout the state. They counted votes in only the counties Gore asked to be recounted. They counted every number of ways. They counted dangling chads, hanging chads. They gave Gore every benefit of the doubt. Bush still won. But even had that not been the case the election was already certified, the electors from the state of Florida had already been certified by the governor Jeb Bush, the Florida legislature had they had to, would have gone back in and recertified, sent the results up to Washington, the House of Representatives. There was no way Gore was going to win this. The Supreme Court didn’t deprive anybody of being president. They didn’t give the presidency to anybody. All the Supreme Court did was tell the Florida Supreme Court, ‘Stop. You cannot make up election law from your bench. That’s the job of the Florida legislature.’ They were changing recount rules every appeal that went to the Florida Supreme Court. They were counting ways of counting that didn’t exist. They were coming up with new ways of counting notes, and the U.S. Supreme Court told ’em twice to stop, and when they didn’t stop, the Supreme Court stopped it itself.

You know, these people cannot get the truth through their heads — and I’ll tell you, we had a call last week about why there’s such fear and outrage among these people and I think he was exactly right. There’s just fear of powerlessness that these people have, and they fear the loss of continued power, or the lack of access to it, and they become like spoiled children, whining and complaining and moaning. The very people that are doing the most to protect them are the people they are most scared of. For example, in this war on terror.