RUSH: I wanted to get to a little bit of this Arnold Schwarzenegger stuff here before the break, because he is going to be on the program shortly after one o’clock. Now, here’s what’s happening. He commutes. He flies into Sacramento most days. He doesn’t stay there overnight. His plane is due to arrive at the airport at ten. When he gets off the plane, they’re going to hustle him to a landline in the nearest building, the nearest FBO where he comes in. Depending on delays on a runway (you know how air traffic control is) he may be a little late, but he will be here within the first segment of the next hour. Yesterday during his appearance on the Today Show, he’s once again asked about me and says, ‘Rush Limbaugh is irrelevant. It doesn’t matter to me what anybody outside California is saying because I’m going to do what I’m going to do,’ blah, blah, blah, blah.

Everybody thought he was saying I was a has-been. I know Arnold Schwarzenegger and that’s not what he was saying, and as I say, his office called late yesterday afternoon — they e-mailed actually — and asked to appear on the program today to set the record straight. They said they were mortified by the way they’d seen this treated in the media. We went back to the archives, because one of the things I opined yesterday was that he was probably getting fed up with having my name thrown at him every time he’s on this show and other shows like it. Let’s go back to August 8th of 2003. He was on Good Morning America, Diane Sawyer and Arnold had this exchange on August 8, 2003.

SAWYER: As we heard, Rush Limbaugh coming in from the right, the Republican side, has said you’re not really a California Republican. You’re a liberal.

SCHWARZENEGGER: Well, I don’t want to get into that right now.

RUSH: And then January 14th of this year, he was on with ABC’s This Week with George Stephanopoulos and they had this exchange.

STEPHANOPOULOS: Rush Limbaugh does not like your new agenda at all.

SCHWARZENEGGER: Well, at least we still like to smoke stogies together. So at least we have something in common. (Laughing.)

STEPHANOPOULOS: But does it bother you that conservatives like Rush Limbaugh think you’re betraying them?

RUSH: And February 26th of this year, CBS’ Slay the Nation with Bob Schieffer.

SCHIEFFER: Somebody like Rush Limbaugh might say what you really did, (is) you just went liberal on us. What do you say in response to that from the right?

SCHWARZENEGGER: I always say that you don’t have to give up your principles. All you have to do is just serve the people.

RUSH: And of course there was yesterday with Campbell Brown on the Today Show.

SCHWARZENEGGER: Rush Limbaugh is irrelevant. I’m not his servant. I am the people’s servant of California. What they call me, if it’s a Democrat or a Republican or in the center or I changed or this or that, that’s not my bottom line. This is for them to talk about.

RUSH: So I just follow my instincts here. That’s what I’ve done my whole life and my whole career, and I think he just — I won’t say snapped, but I think every time he goes on one of these shows in Washington they throw my name at him, and this was the first time he was not, quote, unquote, diplomatic in his answer. He got a little testy and now wants to come on the program today to talk about it. We have time for one more, a montage. CNN has gone wall-to-wall with the ‘feud’ between Schwarzenegger and me.

WOLF BLITZER: There is a growing war of words between Arnold Schwarzenegger and Rush Limbaugh.

WOLF BLITZER: A war of words between Arnold Schwarzenegger and Rush Limbaugh. We’ll have the report.

WOLF BLITZER: The Terminator versus the guy who calls himself The Most Dangerous Man in America. Arnold Schwarzenegger taking on Rush Limbaugh.

WOLF BLITZER: Is Arnold Schwarzenegger a closet liberal? Is Rush Limbaugh ‘irrelevant’? Why are these Republican heavyweights caught up in a grudge match?

WOLF BLITZER: It’s the latest volley in a heated war of words. We’re going to show you how Rush Limbaugh is responding.

RUSH: That was CNN. That’s how they promoted the upcoming piece with Carol Costello, which we’ll have for you after the break. 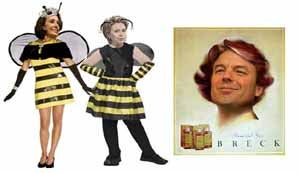 COSTELLO: Rush Limbaugh is a master at coining a loaded term: Breck Girl for Democrat John Edwards, feminazi for feminists [sic–there are only about 12 feminazis], and Queen Bee Nancy for Democratic speaker Nancy Pelosi. But why pick on Republican Governor Arnold Schwarzenegger? Rush Limbaugh calls himself The Most Dangerous Man in America because critics have long worried his powerful radio show shaped the political landscape, and then came Arnold, who told the Today Show…

COSTELLO: It was a shot aimed at Limbaugh’s loaded term for Schwarzenegger, closet liberal.

RUSH ARCHIVE: I don’t know what happened to Arnold. He obviously didn’t have the leadership skills to articulate conservative principles, and win over the public as Reagan did.

COSTELLO: Some political observers say Schwarzenegger’s smackdown is a sign Limbaugh is not the dominant force he once was. Back in the day, his was the only conservative voice on the airways. Now he’s one of many. Still, conservatives credit Limbaugh for the Republican takeover of Congress in ’94.

COSTELLO: Still, none of this means you’ll hear any Republican running for president disrespecting Limbaugh. They’re still in the business of not offending anyone. Schwarzenegger, who can’t run for president, is free to shoot from the hip. As for how Limbaugh responds to being irrelevant, well, on his show today he said, ‘I don’t know how it is I can be irrelevant when every time Schwarzenegger shows up on the Today Show, they ask him about me,’ and, you know, Wolf, he does have the number one talk show in America still.

BLITZER: He certainly does — and this additional note, the fight is continuing online. The number one story on RushLimbaugh.com right now is this: ‘Schwarzenegger Sold Out.’