They Lie! Almost No Temperature Records Were Broken Last Week

RUSH: Did you know, ladies and gentlemen, almost no temperature records were broken in last week’s “record-breaking heat”? It is remotely possible because what we got in news reporting last week was a bunch of untruths, was a bunch of lies. “Record breaking,” quote, unquote, “US Heat Wave Breaks Records at Less Than 0.4% of All Stations Reporting Last Week.” I was in Boston. In Boston the heat index was reported to be 110, 112. They weren’t even bothering to report the temperature. I found it. The temperature in Boston on Saturday (or maybe it was Friday) hit 102, one degree short of the record — and do you know when the record of 103 was? 1926!

So the point is, there is almost nothing true in mainstream, Drive-By Media. Everything being reported today is to advance a political agenda of liberalism. Because, of course, “Record-breaking heat may last for weeks! Giant dome over two-thirds of country! No relief in sight! People stealing copper, people stealing air conditioners. It’s never been seen!” All of it lies. Well, the crime reporting probably wasn’t lies, but the temperature? All of it was lies so that on-air doofus TV meteorologist could dutifully follow up with…global warming, and, “How about those deniers?” Media myth debunked: Almost no temperature records broken last week.

Live it, love it, dig it. Whatever it takes.
BREAK TRANSCRIPT

I said, “I know about the weather before it gets forecast.”

He looked at me and he laughed he said, “Yeah, yeah, yeah, you would.

I said, “Well, what were you gonna tell me?”

“Ninety-nine degrees in July? Is that a record?”

“Yeah, I don’t think I’ve ever felt 99 degrees before. Thanks for telling me.”

He said, “Well, we’re supposed to hit a record the next day.”

“Really, in July? That’s unheard of. If this were February I’d be impressed. This is July.”

Kathryn’s nudging me with elbow: “It’s just three a.m.. Can you shut up and we just get to the hotel?” I mean, playfully nudging me. So all the news stories I just had today — all the news stories about all of the record-breaking heat last week — were lies. In only four-tenths of 1% of reported temperatures was a record set. Had I known this sound bite existed I would have played this sound bite when I reported it last week. Last Thursday and Friday PMSNBC, a montage of Michael Smerconish and Sergeant Schultz and the Reverend Sharpton discussing me, discussing the heat index. 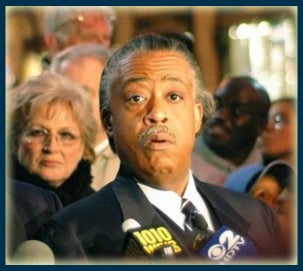 SMERCONISH: Here comes Rush Limbaugh to helpfully tell us that what we think is record heat is really no more a government plot. Rush, I’ve got a question: By that logic, is the wind chill factor a government plot to deny global warming?

SGT. SCHULTZ: Rush Limbaugh thinks this summer’s sweltering temperatures are being manufactured by the government.

SHARPTON: Rush Limbaugh thinks the heat index is a conspiracy cooked up by the lef’. (chuckling) I wonder what he thinks of the wind chill.

RUSH: Okay, I’m convinced they’re writing Al Sharpton’s scripts. I’m convinced that they’re writing Sharpton’s scripts, when he starts sounding like everybody else. You know, until I start hearing talk about Tawana Brawley I’m not gonna think that he’s actually talking about what he wants to talk about. He’s actually, Sharpton, reading a script. Well, how do you dolts feel now when you understand that there wasn’t one record set last week? The heat index is not an official temperature. It’s not a record. There are too many variables in it, but they wanted to go along with the heat index because it was crisis, because it got everybody all frightened!

It was news coverage, it was something new, it was something to get people captivated, controlled. The heat index was created in 1979, or ’78, whatever. It was adopted one year later by the National Weather Service, but it’s an official nothing. But last week all that was reported was the heat index numbers, as though that was the record — and there were no records set last week, pure and simple. You see what happens, folks, when you live in Realville? See what happens? When you live in Realville, when you’re the mayor, the dogcatcher, the town councilman, the garbage collector — and I’m all of that ’cause there’s nobody else here — you get even more abuse living in Realville. But somebody has to.
BREAK TRANSCRIPT

By the way, as somebody just suggested, “You know, you would never live in a place called Realville. You’d need to change the name of the town to Reality Heights.” They like that. They’re laughing in there. And since I am the mayor and I am the one to whom these kinds of proposals are made, I do the incorporation charter, it’s now by fiat Reality Heights. We moved on from Realville.