With Obama Slowdown Here to Stay, Regime Will Sling Dirt in 2012 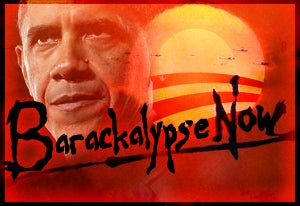 RUSH: “Economic growth second quarter slightly weaker than previously estimated.” Slightly. (chuckles) “According to revised US government data released on Friday, the GDP, which is the broadest measure of our economic health, rose at an annual rate of 1% in the second quarter.” The ChiComs are growing at 9.5%. The Cuban growth rate is higher than ours. The Cuban economy is growing faster than ours! We’re at 1%, revised down. This is a piece of news from the usual Friday evening dump, further buried by the hysteria over coverage of the Storm of the Century brought on by global warming. God, folks, the lies that have become rote! The lies that appear as news in every one of these stories! It’s just amazing. Gross domestic product: 1%. In July we were told it was 1.3%, but they revised it down.

“Economists were expecting the rate to be revised down to 1.1%, according to consensus estimates from Briefing.com.” Imagine that, economists getting it wrong! I’m stunned. I can’t believe it. And then we’re told in this story that the slowdown’s here to stay. The slowdown is here to stay. If that’s true (and I think you and I know that it is) what does this portend for the presidential campaign? Dirt. Pure, unadulterated dirt. The regime cannot and will not run on its record. The best that this regime can hope for is to say that their record would have been astoundingly good were it not for Republican obstructionism, but that’s gonna be a tough sell because the Republican presidential nominee will have had nothing to do with any obstructionism.

The second point is, there wasn’t any! The Republicans didn’t have the numbers to stop anything. There wasn’t any obstructionism. Obama and the Democrats got everything they could get. They could have gotten more if they themselves had been unified. If this slowdown is here to stay, Obama is gone — unless he can create so much unrest and chaos throughout the culture. I personally am very worried and concerned for what’s gonna be happening one year from now, nine months from now in this country, ’cause that’s all they’re gonna have at their disposal. They can’t run on their record. They can’t run on, “We know what we’re doing, just give us more time.” All they can hope to do is try to destroy whoever the Republican nominee is and create so much hell…

Think Chicago ’68, Democrat convention, nationwide. Think that. That’s what has me concerned. Think race card. These people will play it. They’re already starting to. Somebody said to me, “Rush, I’m really worried there are gonna be race riots.” There are. What do you think these flash mobs are? There already are race riots taking place. Small, in comparison. They’re not reported as such, but they’re happening. “Sixty-three percent disapprove of Obama’s handling of the economy.” This the AP-GfK poll: “President Obama began the summer, 52% job approval, 46% disapproval. Numbers that mirrored his performance in the 2008 election. He ends the summer with 47% approval and 52% disapproval.”

In Gallup, it’s at 38% approval. We know the AP is adding ten points just because they like the guy. However, even in the AP poll here 63% disapprove of Obama’s handling of the economy; 92% say the economy is an extremely or very important issue. Eighty-six percent say the economy is bad. Seventy-five percent think the nation’s headed in the wrong direction. If the slowdown is here to stay, Obama’s gone unless Obama can do something or his party or the regime can do something to create so much… I don’t even know what the word is. I have to be very careful about it. Unrest? Anything is possible.