RUSH: If you are in St. Louis today, beware. Obama is headed to town. Now, the Cardinals have a playoff game with the Phillies today. Obama is in town for a pair of fundraisers, including a reception at the Renaissance Grand Hotel that begins an hour after the baseball game between the Cardinals and Phillies starts tonight; and after that reception (which is downtown near the stadium) Obama will head over to the Lindell Boulevard home of Tom Carnahan for a $25,000-a-person dinner. Tom Carnahan is the son of the late governor and the Widow Carnahan who replaced Mr. Carnahan, but here’s something interesting about Tom Carnahan and you might be saying, “Rush, why are you talking about this? I know you don’t care about traffic in St. Louis ’cause you’re not gonna be there.” 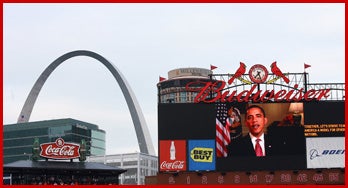 That’s right. There’s a $25,000-a-person dinner at Tom Carnahan’s house. Tom Carnahan received millions of dollars in loan guarantees from Obama for a fake solar energy company. Think Solyndra. I don’t think it’s as much money, but this is the money laundering operation. Tom Carnahan gets money from Obama for a fake solar company and then hosts a fundraiser for Obama? So that’s taxpayer money that Tom Carnahan got — that’s your and my money that Obama’s giving away in loan guarantees — to a fake solar firm, then he heads into St. Louis for a $25,000-a-plate fundraiser. He’s getting the money back. So what Obama has done, and numerous times, is generate campaign contributions that are taxpayer dollars.

You give the money to a fake business, the business holds a fundraiser, the fundraiser is for Obama. The money originally from the Treasury to the fake business, at the end of all this, a portion of it ends up with Obama. I know it’s a circuitous route, but we haven’t gotten to the point where Obama can write himself a personal check from the US Treasury, so this is how he does it. This is how he does it. This is a money laundering operation, pure and simple. You remember now, Obama was in Raleigh, North Carolina, recently where all the bridges were about to fall down, and it created a traffic nightmare, and so the same thing is gonna happen. He’s gonna be out there on Lindell Boulevard after being downtown plus a Phillies-Cardinals playoff game. It’s gonna be a mess.