RUSH: Have you seen any pictures of the Occupy Wall Street protesters on the Upper East Side of Manhattan? The Upper East Side, where they’re supposedly marching in front of financial executives’ homes? You will not see any pictures of the crowd because the crowd was smaller than the number of media covering them. I was really disappointed. I was saddened by the turnout for the millionaires march on the Upper East Side. There weren’t even hundreds of them up there. I mean, even if you use Million Man Math, there wasn’t enough up there to outnumber the media. In fact, I saw one picture taken from the street shooting up the side of a tall building, and there’s one sign — one protest sign — in the picture, and they marched right past George Soros’ building and they didn’t stop at George Soros’ building.

They went to some hedge fund guy name is Paulsen. They went to his building, and this guy came out and said something. He had a reaction to them, which I’ll share with you as the program unfolds. It was basically about how the top 1% are paying 40% of all the taxes. It is clear the more these people are interviewed… I’ve got an audio sound bite coming up. There’s a guy who wants a college education — wants something — and does he have it, and is depressed and thinks that means the American dream is dead. Because he wants it and doesn’t have it, that means the American dream is over — and these people down there that make up the protests, they are the product of something. They are the sum total of what they’ve been told, what they’ve been educated, how they’ve been informed.

These people, as ignorant as they are and as few in number as they are, by the way — it really is a small bunch of people; and the media is doing everything it can to build ’em up and make ’em look huge. They’re so jealous of the Tea Party, they want this thing to be bigger than the Tea Party, and it isn’t, and it can’t be. It is dire for the left right now. The circumstances that they face, they are truly dire, which is another thing that stokes me for the opportunity that we have for such a striking contrast of what we have to offer this country, which has so much in common with a majority of people in this country. 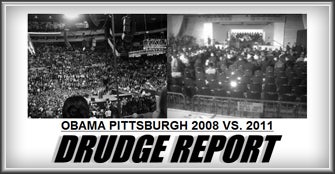 The left is really flailing away. They’ve got nothing. Obama can’t even pack a 200-person hall in Pittsburgh. Obama is yesterday’s news. He can’t run on his record. All he can do (and which he’s going to do) is run on the total destruction of his opponents, opposition research and all of that.

RUSH: I mentioned mere moments ago a Wall Street protester being interviewed and he was upset. He wanted a college education, he wanted his tuition. If he didn’t have his tuition, America sucked. If somebody wasn’t paying his tuition then there’s no American dream. Charles C. W. Cooke from National Review went down there with a microphone. He wanted to talk to people on the protest march and find out just who they are. What do they think? What’s got ’em all agitated? We have two sound bites.

First question, Mr. Cooke talking to the unidentified protester, says, “Your sign, tell me about your sign.”

PROTESTER: It just says, “Throw me a bone, pay my tuition.”

PROTESTER: Why? Because I think these billionaires are getting a lot of money just out of greed. You know, they’re exploiting people, the underclass, like lower-class people, middle-class people.

COOKE: How do they do that?

PROTESTER: How do they do that? Just through — well, I guess it has to do with the government as well. For example, we get taxed more than they do.

COOKE: I know, but I mean give me the reason for it. I mean, I’d quite like a new car. Should that be paid for?

PROTESTER: No. I mean it’s whatever. People can say whatever they want.

COOKE: Of course you can say what you want, but I’m asking why that in particular, like —

PROTESTER: Just because it’s what I want.

COOKE: But, I mean, you can’t just have everything you want paid for, surely —

PROTESTER: No, but I can put it out there, I can say what I want, so that’s what I think.

COOKE: Okay. That’s fine. But I mean from my perspective what you’ve done is you’ve basically written stuff you want on a sign like a Christmas list, and then you’re holding it in the air.

PROTESTER: Yeah. Why not?

RUSH: Yeah, why not? “Why not? I want it.” “Well, you just can’t have anything you want paid for, surely.” No, but I can put it out there, I can say what I want. Yeah. That’s what I think. Yeah.” “From my perspective what you’ve done is you’ve basically written stuff you want on a sign like a Christmas list and you’re holding it in the air.” “Yeah, why not?” But the point is, this worthless little kid is running down there trying to get involved in a protest. He has no clue. He proudly tells the world he has no clue about anything, just that it isn’t right out there. “Wall Street and the government, the billionaires, they’re exploiting everybody, taking money away,” but he can’t explain how, gotta involve the government somehow. He wants his tuition paid for but somehow draws the line, “No, I don’t think somebody else should buy my car.” “Why, what’s the difference?” “It’s my list, it’s what I want.”

But the point is he’s down there protesting somebody’s not paying his tuition, and therefore America is not America anymore. Well, we can laugh about it, and we do. But I take it further. Who did this guy hang around growing up? Where does he get this idea? Where does he get the notion? I mean I know the answer to this. It’s a rhetorical question. Where does he get the idea somebody else ought to pay for what he wants? Democrat Party. American liberalism. Pure and simple. And who’s out there exploiting this kind of abject ignorance? Barack Obama and the whole Democrat Party.