Is This How You Hold a Baby?

RUSH: Ladies and gentlemen, I, the noted lovable radio raconteur, El Rushbo, have no children, and I have been very open about this. So I don’t really know how to hold babies. But there’s a picture, three of them at the Drudge Report, I want you to log on to the Drudge Report and look at how Obama is holding a little baby and tell me if that’s how it’s done. It’s a one hand, one finger hold. Are you looking at it, Brian? Do you see that? You have a child. Have you ever held your child that way, one finger there? Have you ever done that? I’ve never seen anybody do this, and this is all while Obama says he’s not campaigning.

CALLER: Rush, how are you? 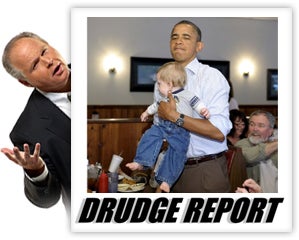 CALLER: You and Mark Levin, best radio across America. I love and listen to you while I drive a truck. I got two questions. I hope you can get to the second one because that’s more important to me than the first —

RUSH: Well, then ask it first.

CALLER: — with your vast knowledge and your memory banks can you recall any president so arrogant, condescending, self-righteous as the one we have right now? What he said yesterday about having to break down that bill so the Republicans could take a bite out of it or whatever —

RUSH: I think Bill Clinton was this arrogant and condescending.

CALLER: I don’t recall that.

RUSH: No, the talk about Republicans wanting to kill people and wanting them to die, my gosh, various Democrat senators and members of Congress, this is not new talk. Now, maybe you’re asking it from a president?

RUSH: You may have a point on that. I think back to the way they talked about Reagan, it really isn’t anything new. They’re just recycling pages in their playbook.

RUSH: Well, it’s a close contest in narcissists between this guy and Clinton.

CALLER: Well, I think he needs to take a good lesson from Bush. Say what you want about his policies, bills whatever, he shows so much class, far more than Obama would ever know or —

RUSH: What’s the second question? We’re running out of time.

CALLER: I’m gonna have to put my shame aside on this, but I heard you say one time to another caller you got a whole wall of laptops. I need one. I gotta get your Limbaugh Letter. Man, I gotta be bold enough just to come right out and ask.

RUSH: Well, I appreciate your asking, but I have a policy. I decide when I want to give one away. It’s totally on impulse. And I have a policy. I don’t give them away when somebody asks. Then it’s not a gift, and I wouldn’t have anything left in five minutes.

RUSH: You go to Drudge, take a look at that photo that I just called your attention to, note the guy behind Obama. That guy is either really getting off on this or he just has a great sense of humor, one of the two.