A Few Words on the Accuracy of the Conservative Intelligentsia

RUSH: I want to talk about the conservative Republican media intelligentsia. These are the people who were dead wrong when the Arab Spring popped up. These are the people who could not have been more incorrect. They told us what was happening in Egypt was marvelous, wonderful, it’s an outbreak of democracy, and we need to get behind it, and we need to support it. All the while, Obama was trying to get out in front of it and make it look like what was happening in Tahrir Square was just an extension of his campaign from 2008. The conservative intelligentsia on our side is doing much the same thing, claiming that the Arab Spring was this wonderful breakout of democracy that we should support, and they’re dead wrong. They’re dead wrong about what the Arab Spring was. Now we’ve got Sharia law that’s gonna be enforced in Libya. Sharia law is probably gonna become the law of the land in Egypt. The enemies of Israel are lining up and joining forces.

Now, my point is our conservative intelligentsia was as wrong as they could be, and yet they continue to pass judgment on all of these candidates: Herman Cain, Michele Bachmann, Rick Santorum, Rick Perry — and specifically when talking about Herman Cain. They’re claiming now Herman Cain doesn’t have the slightest idea what he’s talking about with foreign policy, and Herman Cain is an embarrassment, and, “Herman Cain is not qualified to be president! All he did was run a company, but he’s never been in politics,” which is a business, “and his qualifications on foreign policy are very, very dubious.” Who’s saying this? The people who totally missed what this Arab spring is all about. The so-called experts on our side who told us, “Get behind it. It’s an outbreak of democracy over there! This is a wonderful thing, an extension of the Bush policy. It’s Iraq: The flowering in democracy in Egypt and so forth!”

It’s not. It’s the outbreak of Sharia law throughout that region. So our intelligentsia — and not to drum it home. I don’t want to be redundant here to the point of boredom. But these are the people set themselves up as lofty experts claiming Herman Cain doesn’t know what he’s talking about, he’s not qualified. Not Romney. They’re not criticizing Romney. Cain, Santorum, Perry, Bachmann, they don’t know what they’re talking about, and neither do the people who are criticizing them — and I think it’s an important point to make. These are the same people who were wrong about the debt ceiling. They told us we ought go along with the debt ceiling. They told Boehner, “No, no, no! Don’t fight Obama on this. We’ve gotta raise the debt ceiling. We have to do it.”

The same people who attacked the Tea Party, talk radio, conservatives. They said, “We gotta go along. You know, let Obama and Boehner come to an agreement here on the debt deal.” Okay, so where did that take us? We’ve got this super committee which has as part of its task either raising $500 billion in revenue or cutting $500 billion in defense, which is a disastrous choice and a huge trap and this is what our own experts gave us — and they tell us… After a series of blunders that they’ve made, misjudgments that they’ve made, they sit there and pass judgment on these candidates who are actually presenting some pretty good ideas, compared to what we’re dealing with, compared to what we’ve got in the White House? What they ought to be talking about is the poor judgment of Obama, the lack of qualification of Obama, the lack of competence of Obama, instead of ripping our own people.

But they’re ripping our own people ’cause they’re ripping conservatives — and they’re not conservative even though they want everybody to think that they are. I mean, fine. If you want to question Herman Cain’s foreign policy qualifications and credentials, cool. But let’s talk about yours at the same time. Arab spring an outbreak of democracy? Where is it? Didn’t quite happen that way. Sharia law now looks like it’s gonna end up being the law of the land in Libya. Now we have some really good proposals coming from Herman Cain and now Rick Perry, pushing forward a flat tax. In either case, both of them are talking about serious tax reform, limited federal intrusion via the IRS — and the same crowd is attacking this stuff on the basis that it’s too “simplistic” or joining critics of the left when they say that certain people who don’t pay taxes will continue not to pay taxes, and on and on and on.

What it really boils down to is that certain elements of our own intelligentsia are making the case, defending big chunks of the status quo, ’cause they like big government, and they like “an active executive,” quote, unquote; and they like their turn in charge of the money. We have some conservatives running for president who are proposing serious, substantive, compelling ideas for addressing big problems, and they are, of course, set upon by the usual liberal suspects. But they also are hit on by Republican operatives, so-called conservative strategists and so forth on the basis that, “Weeeell, they don’t know who… They’re inexperienced, lack qualifications, really don’t know what they’re talking about,” and of course they’re not infallible themselves. I can continue to point out areas in analysis where they themselves have been wrong, and yet they continue to occupy these lofty perches of wise men.

RUSH: I do. I think the focus ought to never leave Barack Obama. But our inside-the-Beltway intelligentsia sees fit to have to go out and attack Perry or Cain, Santorum, Bachmann as “unqualified, unprepared, don’t know what they’re doing,” when any of them would be a 2,000% improvement over Obama — who is what? Barack Obama is the least experienced president we’ve ever had — even after two-and-a-half years in office, ’cause he learns nothing. His ideas are unworkable. His policies are stupid. His ideas are naive and dangerous. His record is a disaster. He is the most unqualified, irresponsible, disastrous candidate. Not the conservatives! Not the people on our side running for office! They are such a step and cut above Obama, it’s laughable. Let’s take a look Santorum, Rick Santorum, just as an example. 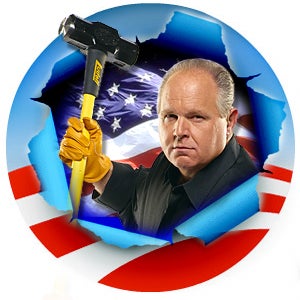 He’s way down in the polls, but other than the liberals and the inside-the-Beltway conservative intelligencia, most of us know full well he’d be a very good president, far superior to Obama. His views on economics and the judiciary are very sound. Yet he’s attacked. Michele Bachmann. She’s trailing in the polls, but she’s solid. She was among the first to build opposition against Obamacare in the House. She was a leader at the Tea Party rallies. She’s articulate, and she was right about virtually everything she said respecting domestic and foreign policy. She’d be a very good president, especially compared to what we’ve got now. Newt. Successful Speaker of the House; big, solid ideas, would be a very good president. Rick Perry just came out with what I think is a really good tax reform plan. It’s not unlike Steve Forbes plan in the past.

He’s got an energy plan that would unleash our own vast resources. He would make a very good president. Herman Cain is not just an experienced businessman; he’s a brilliant businessman. He turned around failing franchises and companies. He is both intuitively and substantively conservative and would be a very good president, and Herman Cain has also begun the great debate about tax reform with his 9-9-9 plan — which, to me, is not something to sneer at and laugh at. It’s refreshing. It’s necessary. It’s long overdue, if we’re serious about all of this — and we are. There’s so much to like about all this. Nevertheless, this group of people that I have just highlighted here — these people — we’re told that they are the inexperienced, uninformed, inarticulate, weak conservative candidates.

They’re repeatedly attacked by the liberals, repeatedly attacked by the media — and, in some cases, attacked by the Republican establishment. But at the end of the day I would trust any of these conservatives serving as president of the United States. I would trust any of them. I would be confident with any of them. I would be happy with any of them. Furthermore, I am certain that this country would be reinvigorated if any one of these were president. Major reinvigorated — and I have no doubt, by the way, folks, that the liberals, the media, and even some in the Republican establishment would despise their presidencies. But that’s good! That’s not a bad thing. That’s not a disqualifying fact.

Just because the Washington establishment, I don’t care what party they’re in, oppose this and just because they wouldn’t be happy? Who cares. Any one of these people would be such a vast improvement over what we have now. And they’ve all thrown their hat in the ring, they’ve all taken the plunge, they’ve all been willing to take the media anal exam. They all think that there is a desperate need for what they have to offer, and the people criticizing them are no better than they are. The people criticizing them don’t have any better records when it comes to foreign policy or domestic policy than these candidates do. The difference is the candidates have accountability. The critics don’t. Nobody holds them accountable. Nobody even remembers when their criticisms have been incorrect or erroneous or what have you. Now, I’ve not mentioned Romney in this; I don’t want anybody to get upset.

I haven’t mentioned Romney because he’s not being attacked. Romney’s not being attacked as an inexperienced conservative ideological, et cetera, et cetera. All these other people are. Newt, Perry, Cain, Bachmann, Santorum, they’re all being attacked as inexperienced or unqualified. They “come up short” in one area or another. Foreign policy, domestic policy, or what have you. But I didn’t mention Romney, and I didn’t leave him out on purpose. I just didn’t mention him because he’s not a target. Nobody’s attacking Romney. But this constant refrain that the Republican field is “weak” compared to the “brilliant and vibrant” Obama-Biden team? I can’t sit by while that takes hold. That’s something that needs to be constantly, vigorously challenged. We’ve got the most incompetent, dangerous group of people running this country in my lifetime and beyond, and anybody on our side seeking to displace them would be a 2,000% improvement.