See, I Told You So: Dems Never Expected to Pass Jobs Bill in Senate

RUSH: I’m often asked when I’m on the golf course — and I haven’t played much lately. I played once since August, twice, I’ve played twice since August. Well, I’ve done that on purpose, so I talk about it less so as not to tick off the Stick-to-the-Issues Crowd. I’ve only played twice. When I do play with a low handicap golfer or a professional I ask them, “Does it ever get boring hitting every shot where you intend to hit it? Does it ever get boring shooting 72?” and they look at me. They smile big and they say, “Never! It never gets boring being good.” I say, “But you always shoot 72. You never lose a ball. You’re never out of bounds.” “Oh, we do, you just never see it. We save our best for you amateurs just to make you feel even worse.” 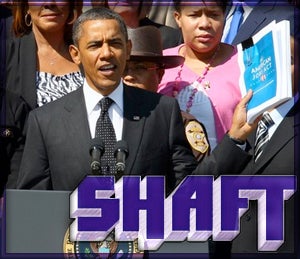 Consequently people ask me, folks, all the time: “Does it ever get boring or old being right?” No. It never does. Then sometimes I’m wrong but you never see it. It never happens on the radio — and here, again, is another example: TheHill.com: “Democrats Seek to Fracture Republican Unity in the Senate.” This story proves that I, El Rushbo, have been right again. Although this was not a tough one to be right about, but still I’ll take it. “Democrat operatives are quick to note that they never expected to pass the jobs bill through the Senate,” is the pull-quote from the story. Never expected to pass Obama’s jobs bill in the Senate! That wasn’t the point. They never expected it to pass. They were trying to “fracture” the Republicans.

They were trying to get a couple of Republicans to break ranks and vote with them on this so they could run around and claim “bipartisanship,” and so they could go out and campaign against Republicans who wanted to join Obama’s tax increase bill. The story is by Alexander Bolton: “Senate Democrats, exasperated by their failure to crack GOP unity, are forging ahead with a new jobs strategy that will likely produce an old result. Democratic leaders have changed the ingredients of, chopped up and sweetened President ObamaÂ’s jobs package in an effort to lure Republican votes. It hasnÂ’t worked, triggering the question: What will it take for even one or two Senate Republicans to vote for anything in the presidentÂ’s plan?” and that was the game all along.

Not what’s in the plan. What can we do? What trick can we play? What sly manipulation can we engineer to get a couple of Republicans to vote against themselves and their own interests and vote for us? “That is what Senate Majority Leader [Dingy Harry] has been pondering in recent days after repeated efforts to pick off a GOP defector have failed. A senior Senate Democratic aide predicted Tuesday that not a single Republican would vote for the latest jobs package of $50 billion in infrastructure spending combined with a $10 billion national infrastructure bank.” Not a single Republican — and they’re very regretful about this, the Democrats.

Not a single Republican will vote for another slush fund for public sector unions who kick back a portion of that money to the Democrat campaign. Who would a Republican ever vote for that? That’s what the Democrats have wanted. They want this thing to pass. It’s another giant slush fund, the money laundering trail previously explained by me on this program — and the Republicans aren’t voting for it, and Dingy Harry’s frustrated. They lost a couple Democrats, too, like Ben Nelson from Nebraska and I forget what the other one was. But they did lose a couple Democrats. “Senate Democratic leaders hope to vote Thursday on the jobs bill, but they expect the outcome to follow the same lines as the previous two jobs measures Republicans voted unanimously to block. …

“Obama will try to ramp up pressure on Republicans by visiting WashingtonÂ’s Key Bridge on Wednesday, one of many bridges around the country eligible for funding if the infrastructure bill passes.” What is he gonna do? Is he gonna actually try to make it look like the Key Bridge is in a state of disrepair in his own backyard? In his own backyard there’s a bridge that he’s going to try to imply that is in terrible need of repair? Meanwhile, he won’t shut down traffic over the bridge, right? Traffic will continue. “Asked on Tuesday if he was frustrated, Reid responded, ‘I’m not frustrated, I’m terribly disappointed.’ … Democratic operatives are quick to note that they never expected to pass the jobs bills through the Senate…” Ladies and gentlemen, don’t doubt me.

I know the temptation is great, and I know that catching me in an error is something many people would like to be able to brag about. But don’t doubt me. This thing was never intended to pass. It has always been nothing more than a weapon and a trick. “Democratic operatives are quick to note that they never expected to pass the jobs bills through the Senate, adding that the multiple roll calls will put Republicans on the defensive and force them to explain on the 2012 campaign trail why they voted no on” jobs. That’s what this has always been about, and it was written in a such a way that no Republican — I don’t care who, not even the most liberal RINO — would vote for it. That’s how outrageous it is. Oh, they would have taken a couple Republican votes, don’t misunderstand, but this thing was never intended to see the light of day.