RUSH: We got polling data out the wazoo today. There’s a Gallup poll that says the fear of Big Government is near an all-time high. Sixty-four percent of Americans now say Big Government is the biggest threat to the country since March of 2009. What happened then? Since March of 2009 the number has shot up 16% even among Democrats. March of 2009. That’s just two months into the Obama regime. Well, no, Porkulus was February. March is when everybody figured out what had happened. March is when everybody figured out what the Porkulus really was. But March is the early days of the regime, and it shot up 16 points even among Democrats. How is that possible? Obama’s been in the White House since March of 2009. That’s how it’s possible, folks.

Also, you know, they’ve got their charts and graphs as part of the story, and the charts and graphs are even more graphic, they’re more indicative of the devastating result here than even the text of Gallup’s story. According to Gallup, America’s fear of Big Government has always dwarfed our fear of big business by a huge margin, and now the gap is bigger than ever. I know, it’s conflicting, because we also have polling data which tell us that Obama is personally very liked. I wonder about that, but nevertheless it’s out there. But now, the gap is bigger than ever, people fearing Big Government over those who fear big business, the gap is bigger than ever. The Occupy Wall Street protesters are having no effect, or maybe they’re having the opposite effect. But it’s still fun to watch all that union Obama campaign money being squandered here because it isn’t working. It’s not persuading people that Big Government’s the answer.

There’s also another Gallup poll, this one with USA Today that says that either Republican front-runner — Newt, Romney — would beat Obama in the swing states. Oddly enough this poll doesn’t even show up in the Gallup sight. You have to go elsewhere to find it. Gallup hasn’t posted it on their site yet. That information I just shared with you, by the way, is in the 14th paragraph of the USA Today article on their poll. Either Republican front-runner would beat Obama in the swing states, i.e., the independents, i.e., the moderates. But you have to read 14 paragraphs in to get there. That’s what we do for you here at the EIB Network. But they do finally spell it out. Mitt Romney among registered voters by five points over Obama 43-48, Newt Gingrich by three over Obama 48-45.

So the White House has to be panicking, and my submission is that the White House has been panicking for a long time. The White House has been panicking, the Democrat Party has been panicking for quite a while. That’s why they’re playing all the games with the unemployment numbers. And, by the way, Snerdley is somewhat depressed. He sends me a note here today, “Have you seen the retail sales number?” I said, “Yeah, I’ve seen a whole bunch of different reports on the retail sales numbers.” So the one Snerdley gives me is from AP. “Americans spent more on automobiles, furniture, and clothing at the start of the crucial holiday shopping season, boosting retail sales for a sixth straight month. Retail sales rose 0.2 percent in November,” said the Commerce Department. Okay, fine. Can I share with you some headlines? I printed this out at 11:30, so 34 minutes ago: “Retail Sales Rise for a Sixth Month. Inventories Show Growth,” USA Today.

Snerdley only saw one story. I, as host, see them all — and it’s typical. Retail sales are nothing to write home about here, even though it is Christmas. You know people are gonna scrimp, scratch, claw around to find something — even though we had a story (what was it, two weeks ago?) that half the country wasn’t gonna be able to participate in the retail aspect of Christmas simply because the economy was in such bad shape. So we’ve got all this polling data out. In fact, I have more here on the USA Today/Gallup poll. It’s the same USA Today/Gallup poll that shows either Republican front-runner, Newt-Romney, doing better than Obama in all the swing states.

It also points out that since 2008, the number of voters who identify themselves as Democrat or-Democrat-leaning in the swing states is down by four points, while the ranks of Republicans have increased by five points. The swing states, by the way, are Colorado, Florida, Iowa, Michigan, Nevada, New Hampshire, New Mexico, North Carolina, Ohio, Pennsylvania, Virginia, Wisconsin. Those are the swing states, and that’s where Newt-Romney is beating Obama no matter where you go, in all of those states. It’s where Democrat Party identification is down 4%, Republican Party identification is up — and then over here is a Marist poll, and the Marist poll says: There is a secret wave of Democrat enthusiasm for 2012 that nobody has seen but us.

They’ve got a poll out that says that Democrats are chomping at the bit out there to go vote — they can’t wait! — and nobody knows it but us. But here we have Gallup, USA Today/Gallup. In fact, I’m not through. The same Gallup/USA Today poll found, in the swing states, the number of self-identified Democrats not including those who lien Democrat fell from 35 to 30% since 2008. That’s since Obama. The number of independents rose 30 points, 35-42%. So it would appear, ladies and gentlemen, that the conservatism — and this is the key. The conservatism of the Republican field is not scaring away Democrat crossovers and independents. 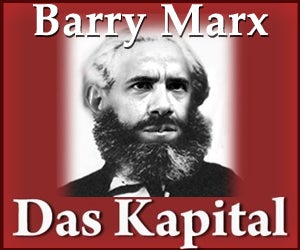 It’s not, and yet the entire Republican establishment thinking is based on this false notion that conservatism scares independents and forces ’em to run back to the Marxists and socialists. Well, that’s what we’re up against. We’re not just up against a bunch of dull, boring Democrats. We’re up against Marxists and socialists, and our geniuses in the Republican establishment — our geniuses in the Republican consultancy corps — still operate on this notion that Barry Goldwater is the formative event in terrorism and that every time a conservative nominee is nominated, that’s what’s gonna happen and the independents and the moderates are gonna run for the hills. They’re gonna run for the tall grass trying to find the Marxists and socialists and get in bed with them.