Newt Signs Pledge Not to Cheat on Callista

RUSH: Newt wants a peace offering with Mitt. He said (paraphrased), “We gotta remember who we’re up against here. We’re up against Obama, not each other.” I was called a “tribal leader,” and I have not instructed anybody to go out and smoke a peace pipe. I have not made anybody sign a pledge. I’ve not. You know, I talked to Kathryn. Kathryn is swamped. We have our next major Two If By Tea promotion coming up. It starts tomorrow, the next three days, Wednesday, Thursday, and Friday — and it’s a huge prize. It could be best prize we’ve offered, and we’ve offered trips to Hawaii. But this could be the best promotion ever. We’re going to announce the two new flavors tomorrow. So Kathryn’s been swamped. I said, “Did you hear what Newt did?” I asked her this last night. She said, “What?” “He signed a pledge not too cheat on Callista. He signed a pledge!” She said, “Yeah, I heard you mentioning that. You were right.”

That doesn’t happen much when she tells us I’m right. 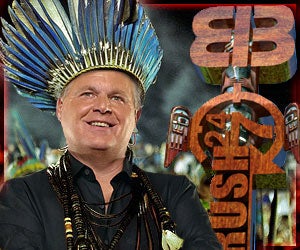 She said, “You’re right. I thought the vows took care of that.”

I had nothing to do with that pledge. Snerdley asked me if I’m asking, as tribal leader, that people sign pledges. No, I don’t do the pledge thing. I’m not gonna start making them sign pledges. No, no. I’m not gonna sign any pledges. I think that’s a joke. I think all these pledges are just… (sigh) Let me ask you. (laughing) A pledge disavowing global warming? “Hey, Mitt, look at what Canada did, Mitt. Did you see this? Canada’s pulled out of Kyoto Protocol. Canada is the first country to pull out of it. When they figured out it was gonna cost them $13.6 billion and a bunch of other economic penalties they just pulled out of it.” Kyoto minus Canada. Moving on. Yeah, Newt pledged to sign the pledge. He’s promised to sign the promise not to cheat on his wife. You know why that happens? Because some family values group offers it up. So if the family values group offers, how do you say, “I’m not signing the pledge!”

“Oh, so you are gonna cheat on Callista?”