Obama Takes Credit for Success of the “Dumb War” in Iraq

OBAMA: Nine years ago American troops were preparing to deploy to the Persian Gulf and the possibility that they would be sent to war. Many of you were in grade school. I was a state senator. Many of the leaders now governing Iraq, including the prime minister, were living in exile.

RUSH: “I was a state senator.” Meaning I didn’t have anything to do with it. Now he’s praising the troops. This is October 2nd, 2002. Listen to this.

OBAMA: I don’t oppose war in all circumstances and when I look out over this crowd today, I know there is no shortage of patriots or patriotism. What I do oppose is a dumb war.

RUSH: He’s talking about the Iraq war, dumb war. He opposed it. And here he is this afternoon again.

OBAMA: We’re leaving behind a sovereign, stable, and self-reliant Iraq with a representative government that was elected by its people. We’re building a new partnership between our nations. And we are ending a war, not with a final battle, but with a final march toward home. This is an extraordinary achievement, nearly nine years in the making.

RUSH: I want to go back to the audio sound bites. I want to finish this sound bite with Obama. This is the piece de resistance. This is this afternoon Fort Bragg. Remember, now, Obama, 2002, dumb war throughout his time in Washington and in Chicago, state of Illinois. Dumb war, constantly opposed it. The objective was silly. Democracy in the Middle East, why, that’s impossible, we have no business being over there. This is Bush’s war. Bush is lying. Every effort that was made by the Democrat Party to sabotage and undermine victory, Barack Obama was right in there. Now, as president, he’s taking credit for every aspect of it, and here’s the final thing that we have him saying today.

OBAMA: You, the 9/11 generation, has earned your place in history. Because of you, because you sacrificed so much for a people that you have never met, Iraqis have a chance to forge their own destiny. That’s part of what makes us special as Americans. Unlike the old empires, we don’t make these sacrifices for territory or for resources. We do it because it’s right.

RUSH: He doesn’t believe a word of that. This is reelection time, campaign central. Here he is now trying to tell us what’s great about America because of what we did and what our military did in Iraq. And, believe me, those people at Fort Bragg and people wearing the uniform of this country know full well where this guy was. They know full well what Obama’s position was when they were putting it on the line. They know what the Democrat Party was trying to do. We’ll never forget the MoveOn.org ad on General Betray Us. Dingy Harry, (impression) “This war is lost. This war is over.” And Barack Obama was right in there. And now Iraq is a great testament to the greatness of America. The Iraqis can forge their own destiny.

When George Bush set all this up, it was impossible, it was a lie, Bush was there for totally different reasons. He was lying. He was there to avenge his father and Saddam’s attempt on his life. He was there because he just wanted war. He was there because he was trying to distract people from his failures as a president. All of these things were said, every effort in the world to undermine victory and Barack Obama was all part of it. No blood for oil, all of that, yeah. Meanwhile, Obama wants to cut the Pentagon budget by a trillion dollars, two phases of $500 billion each. The vast majority of the defense budget goes to payroll and health care. But Obama’s biggest point was that Bush invaded to distract us from a bad economy and that Bush kept us in Iraq.

And, remember, Obama was all over Club Gitmo in torture and all the horrible things we were doing, and now, when it’s reelection time, he goes to the very people he accused of being torturers and maimers and criminals and tells them how proud he is of their sacrifice for people they had never met. John Kerry called them terrorists, folks, storming into the homes of Iraqi mothers at night and taking their children. Dick Durbin compared our troops to the Nazis and the Soviet soldiers and the gulags. Jack Murtha of Pennsylvania believing that the Marines had committed rape at Haditha. That’s what the Democrat Party was doing all during the Iraq war, and it was joined in every phase by Barack Obama. This is sickening. Makes you want to puke. 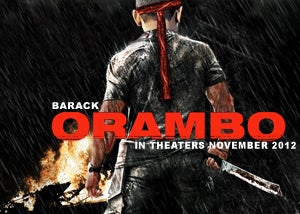 RUSH: Exactly what has Obama done for our combat troops the last three years? He’s done nothing, and nobody’s gonna be fooled by this Fort Bragg speech. Nobody is gonna be fooled by it. Nobody is gonna be buying into it. We’re gonna keep reminding everybody. I remember back in (what was it?) August of 2007, Obama said that our troops in Afghanistan are just air raiding villages and killing civilians. He has been a constant drumbeat of criticism of the American military. He has never supported victory. He was part of a political party that sought to undermine victory. But like I always told you, folks: Once they get the White House they will not lose a war.

CALLER: Hello, Rush. Uh, thanks for having my call.

CALLER: Look, (sigh) I want to speak about the policies of this administration. I’m a former Marine myself, did a few tours in Iraq and Afghanistan — and quite, frankly, I could speak for many, many of my friends, some of whom are still in service. The policy of this administration have been destructive. They have cut military funding dramatically — we saw that in the recent defense bill. You know, we’re looking at cutting down our F-22s, our aircraft groups, our —

CALLER: — troop numbers, and this “don’t ask, don’t tell” repeal frankly undermines the unity of our military, and I think the Republican candidates out there really need to make a strong platform of how they’re gonna fix our military, how they’re gonna defend our country and what they’re gonna do for the men and women of the Armed Forces because we’ve seen devastating damage done to the security of this nation and the very fabric of our military — and, quite frankly, as a former Marine I’m very concerned about this.

RUSH: Well, you should be and a lot of Americans are, and that’s why I say that this Obama speech at Fort Bragg not gonna fool anybody. He hasn’t done anything for the troops in three years. There’s not one thing that they can cite that Obama’s done. I appreciate your call, Alex. Thanks very much. Merry Christmas. 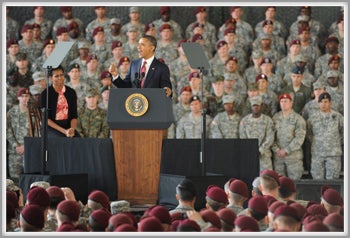 RUSH: And we cannot forget Obama’s rules of engagement in Afghanistan. Remember? They were thinking of awarding a medal for “courageous restraint,” for not firing. Yeah, that’s doing a lot for the troops. We don’t forget these things — and speaking of the military and the Democrats right now. Here’s Obama out there today Fort Bragg trying to claim credit for all the good that this country did and all the good this country stands for in Iraq, that Iraq is now in charge of its own destiny, and we did it. It’s a testament to the greatness of America — and he opposed it every day that that war was ongoing. The Democrats are as we speak holding funding for veterans in active military hostage. They are refusing to pass any spending bills for the Pentagon or to even keep the government going.