RUSH: I had to think as I was sitting here this morning, you let me down again. The staff let me down again, ’cause I got here, I said, “What am I doing here today? It’s a national holiday.” This happens every year. Every year I get stuck here ’cause I don’t think along the lines of holidays. I just don’t think it. I’m not like most people. You know, geared to the sick days. Geared to the vacation days. When’s the next day off? I don’t think like that. So I trundle in here, and then I find out it’s Martin Luther King Day, it’s, therefore, a national holiday. Somebody shoulda told me. Nobody did. And so I run the risk of being accused of racial insensitivity by showing up here. (interruption) 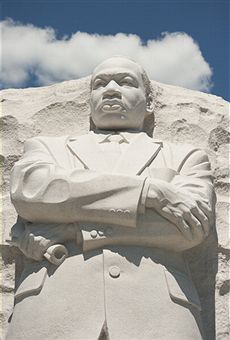 What? What does what I’m wearing have to do with it? Well, maybe so. I thought about maybe leaving, you know, just running a best-of show to prove my racial sensitivities and so forth. Obama’s out there, Martin Luther King Day is another day of service to the community. Yep, Martin Luther King Day. In fact, KGO television in San Francisco: “Organizers are hoping to see thousands across the Bay Area come out and make a difference today. President Obama and Coretta Scott King are asking for people to think of today as a day of service.” Now, I don’t want to be insensitive here, but didn’t Coretta Scott King pass away in 2006?

Service to the government.