RUSH: Snerdley, start answering phones, I’m gonna get to calls here. I want to find out what people thought about this. And, by the way, a specific question, was your mind changed? Have any of this that’s happened in the last two debates changed your mind about anything? And don’t worry, I’m going to tell you what I thought. It’s just if I start out telling you what I thought then nobody’s gonna care what you think. It would be anti-climactic to put you on after

what I say, and so I’ll save it. I’ll save it. I’ll just tell you, there is one apparently piece of conventional wisdom — how best to put this? There’s one area where I apparently am a lone wolf in my review of what happened last night. I can’t find anybody who agrees with me. I’m alone. Well, as far as I know. Among the people that I have spoken to I hold a view of what happened last night alone.

RUSH: Here’s Don, Myrtle Beach, South Carolina. Great to have you on the program, sir, on Open Line Friday.

CALLER: Yeah, Rush, nice to be on the line with you.

CALLER: The media might be surprised that I’m from South Carolina and I’m actually calling you on a smart phone. But you asked earlier if any of these debates —

RUSH: Yeah, but you probably had to leave the cockfight in order to make the call.

CALLER: Yeah, that’s right. You asked if anybody’s changed their mind over the last couple days of these debates. Well, I have. I was at the Myrtle Beach debate. Going into that, I was probably 60% leaning Romney. I was up to the belief that he was the only one that could beat Obama. After that debate, Newt really kinda raised up in my mind and really, after last night, I’m voting for Newt.

RUSH: Now, what was it specifically that Newt did that changed your mind?

CALLER: I’m a conservative and Mitt never really, you know, never really captured that in me, but I bought the idea that Mitt was the only one that could win it. I thought Mitt probably had too much baggage so really going into the Myrtle Beach debate I was kind of 60% Romney and 40% Santorum. Santorum, to me —

RUSH: Wait a second. I want to make sure I understand this. You were 60% Romney, 40% Santorum, and now you’re a Newtster?

CALLER: Yes. I mean I’ve always liked Newt in the way he’s expressed the conservatism, but I really was — his so-called baggage, I didn’t think he had a chance to win.

CALLER: Yeah, actually I think he can. I don’t think Obama is this — I think it kind of goes back to you need to go ahead and stand up for conservatism, compare and contrast against Obama’s socialism, and I think Newt’s the best person to do that.

RUSH: Well, it’s interesting. I’ve always said, let conservatism reign. Let it triumph. Just put it out there, articulate it passionately from the heart, and it won’t lose. National election. But the consultants just won’t let it happen. They think you gotta go middle of the road, moderate. They think conservatism scares off the independents, much less the Democrats.

RUSH: Bob in Brandon, Mississippi, great to have you on the program, sir.

CALLER: Thank you. Thank you. Glad to be on. Listen, I am so excited about Newt Gingrich and what’s going on in the Republican Party that I’m almost ready to charge after Moby Dick with tartar sauce in one hand and a fork in the other. I tell you, Newt stands up for what he believes. He doesn’t cow down to anybody. He tells it like that — and not only that, he’s intelligent enough to tell it like it is. That’s what we need in a leader. We don’t need some namby-pamby fellow. We need somebody that stands up and gets the job done and takes up for his country, and that’s what I’m excited about.

RUSH: All right, and that’s based on the debates this week?

CALLER: No, it’s based on everything I’ve heard over the last several months in all the debates. It’s not just been this one. Every time he talks, he talks as a man of authority. He also talks as a man of compassion, and he cares about his country. I’m telling you, this guy is right on track — and because he’s so intelligent, I know he’ll surround himself with good people and good advisers.

RUSH: Well, we’ll see. All right, we’re getting people’s reaction to the debate last night, and seeing if what happened might change any votes. Cory in Logan, Utah. Great to have you on the program, sir. Hello.

CALLER: Honor to talk to you. I’ve been a longtime listener since back in the late eighties down in Albuquerque, New Mexico, actually. (chuckles) So I enjoy your show.

CALLER: Hey, the reason I’m calling is I want you to know I think it’s appropriate the line of questioning that Newt is getting. Simply because an individual asks for forgiveness from God doesn’t erase the consequences for one’s actions. You know, I recall that John Kerry — not John Kerry, sorry. John Edwards was given a pass, but still I want my candidate to be held to a higher standard.

RUSH: Well, what should they be?

CALLER: Well, you know, I think the line of questioning that he’s going through and him getting ticked off is all part of it, but whether or not it’s… I don’t know where the fitting punishment is or a fitting consequence is, but he is reaping what he sowed many years ago.

RUSH: Well, if you want to say that, I’d have to say he’s turning these consequences into a big win-win.

CALLER: You know, he is rallying the troops. I’ll give him credit for that.

CALLER: And he’s turning them into opportunities. He certainly is.

RUSH: Well, it’s what you have to do.

CALLER: Yeah. You know, I had a friend of mine make a post on the Internet the other day saying that perhaps “the biggest assault to the sanctity of marriage in America is not the not the ‘homosexual movement’ but possibly the serial adulterers that there are in society” (laughing), and I found that kind of interesting.

RUSH: Well, some people say the fastest way to end gay marriage is to let ’em get married and then let ’em get divorced. Let ’em go through that and they won’t want any part of it, and they’ll just go back to living together — and a lot of other people won’t get married, either, once they find out what it’s all about with this kind of thing possible. 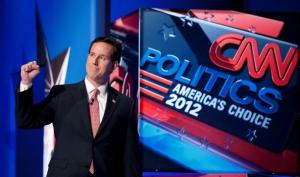 CALLER: Hi, Rush. This is Toby. How are you?

CALLER: First of all I want to say thank you. My birthday’s come six days early getting to talk to you on the phone. I’m very, very excited, first-time caller.

RUSH: I appreciate that. Thank you very much. Happy birthday, too.

RUSH: Oh, yeah. We went in there last Fourth of July. That was fun.

CALLER: Yeah. I know that you did a lot to help out with the vendors that were there since you brought in all your great tea, and I wanted to thank you on behalf of them. I heard about that, and that was a very classy move on your part.

CALLER: Second of all, I want to let you know why I support Santorum over, say, Romney or Gingrich. And before you say anything, I think Newt won the debate from what I saw of it last night. He seemed more confident than anybody else, but his track record in supporting individual mandates for like 20 years kind of turns me off as far as Gingrich. As far as Romney goes, all I gotta say is: Romneycare.

CALLER: Oh, absolutely. I just think when you look at the him and Romney, they’re both blinking a lot and that makes me think they’re nervous. I don’t know if you caught up on that or saw that. Newt always has his poise about him. He’s infallible in that. But I think that Newt probably won the debate just from his confidence and sheer… He seemed to outclass everybody else on the stage, but I think that Santorum’s the guy.

RUSH: All right. Look, I appreciate it, Toby. Thanks very much. I really appreciate your nice words — and, again, happy birthday to you.

RUSH: Okay, I know you’re thinking, “Wait a minute, Rush, you haven’t told us what you thought about the debate.” I pretty much agree with what people on the phones said. (laughing) I can’t tell you what I thought. This is one of the times I can’t tell you. Call it a draw. Nothing is gonna change much from it, and that’s pretty much what I’ll say. I disagree largely with one sentiment that most of my friends told me about but I’m not gonna dare tell you what it is ’cause it’s pointless, but I think Romney probably wasn’t hurt enough to have it matter, so that’s the end result. Newt will probably do well. On to Florida, we’ll go!