What Do Women Think of the Marianne Gingrich Story?

RUSH: Post-debate analysis on CNN, Anderson Cooper 33 had Gloria Borger on last night. This was her take of Newt and his tete-a-tete with John King.

BORGER: Anderson, there is a short-term issue here which is that I do think that Newt Gingrich’s answer attacking John, attacking the media, played well in this room and might very well play well in South Carolina, but there is a longer-term issue and that’s with women voters. He said of his wife, “The story is false.” Newt Gingrich polls in this state twice as well with men as he does with women. And I think in the long term, say if Newt Gingrich wins South Carolina, goes on to do very well and continues, this could become an issue for women voters, obviously.

RUSH: Oh, obviously. Hell, yeah, obviously. It could become an issue with women voters. Newt’s out there, by the way, made news last night, he denied this. He denied the open marriage stuff. And guess what? There is a woman out there. Her name is Grandy, Fred Grandy’s wife, I’m assuming. And she is saying that Marianne Gingrich is unstable and that all the congressional wives thought that from the get-go, that she was a camera hog, that she was loud and outrageous, egotistical, all these things. And that she was not popular with all the people. (interruption) What, what, what, what, what, what? Well, I don’t know what it sounds like, I’m just telling you what she said.

Let me find the exact story here. “Newt Ally Calls Ex-Wife Unstable, Unhinged — Allies of embattled GOP presidential candidate Newt Gingrich are coming to his defense. … What’s more is that they are slapping at ABC, which is set to run an interview,” last night. “One former associate of Marianne Gingrich, former congressional wife Catherine Mann-Grandy, told Whispers that the speaker’s second wife was often rude, loud and unreasonable, and she doubted her story about the open marriage. Citing a code among congressional wives, Mann-Grandy said, ‘We pretty much kept our lips closed, but Marianne was emotionally unstable and I particularly felt that she was obstreperous and rude.'” That is in the US News & World Report, Washington Whispers. I’m assuming it’s Fred Grandy’s wife. Wild guess, but I think I’m pretty good.

She said, “She hopes Americans dismiss Marianne Gingrich as a loose cannon. ‘What I’m hoping is that the Americans who watch this, the patriots who watch this, will look at this and say, “OK, this is a woman who is angry, seems unstable, a little unhinged.”‘” Gloria Borger basically said, in South Carolina, women will tolerate brute sexists. But once you get out of South Carolina, the women aren’t gonna dig this. That’s what Gloria Borger said. He may go on to win South Carolina, but once you get outta here… (laughing) I guess the women in South Carolina, cockfighting, all this stuff, they like boozing it up, they run the stills in the backyard, who knows. Dogfighting, probably that, too. I think this is hilarious. Oh, yeah, women aren’t gonna dig this, women aren’t going to dig this.

This road has been paved by William Jefferson Clinton. The whole notion of having an open marriage — (laughing) — I mean, you defended it, you said it had no bearing on anything. You said sex is private stuff, it doesn’t matter in somebody’s job and how they do their job and to leadership and all that. Newt and Clinton are linked together again. In fact, you could even say that with Mrs. Grandy out there, bimbo eruptions team on Newt’s team and Newt’s version of the nuts-and-sluts defense. “Yeah, she’s unstable.” Meanwhile, Gloria Borger is just steaming, probably called Maureen Dowd, “Can you believe these hicks in South Carolina? Can you believe Newt’s still alive?” They can’t believe it. “What a bunch of dumb broads in this state.” I can just hear the phone call between Maureen Dowd and Gloria Borger. Maybe get Mara Liasson on there for moral support.

RUSH: I want to put this Gloria Borger comment in even more perspective. Gloria Borger says, “These women of South Carolina, they may not have a problem with Newt telling his wife he wants an open marriage,” which he’s denied; it’s not true. But they may not have a trouble with all the philandering, the women of South Carolina, she says. That’s right! Women in South Carolina like it when their husbands cheat on ’em ’cause they’re a bunch of hicks, unlike the sophisticated elite women of the Northeast like Weiner’s wife and like Spitzer’s wife and their monogamous-ness. What’s her name, Silda…? Spitzer’s wife, Client No. 9. Silda? I can’t remember her last name. Of course Weiner’s wife is “Huma.” (interruption) Huma did have a baby, that’s right. Weiner’s baby. Baby Weiner. Okay, ladies and gentlemen, this was Fox & Friends this morning. Geraldo was a guest. Nobody died! Nobody died. There was not a catastrophe, disaster, earthquake, oil spill, nothing, and they still had him on discussing the Marianne Gingrich story. 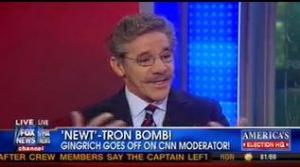 GERALDO: I identify more with Gingrich. We’re the same age, we’ve had multiple marriages. Uh, we have had, uh, obviously multiple divorces. The difference is you’ve never… With all of my checkered past, you’ve never heard an ex-wife say anything bad about me. Why is that? It’s because you take care of people even though your marriage may break down and even though Rush Limbaugh yesterday had it exactly right: We are of a generation that extolled the virtue of sex and openness, and infidelity was almost an afterthought in the generation of the sixties that we represent. So I definitely get that, but when you’re running for president you have to defend your character.

RUSH: (laughing) Gee! (laughing) Yes, he’s talking… (laughing) He’s talking about the note that I got from my buddy. (laughing) We’re “soldiers in the sexual revolution,” that we even need “disability payments” (laughing) from the government. (laughing) But he says, “I identify with Newt: Multiple marriages, multiple divorces, but unlike Newt, you never hear any of my ex-wives bad-rapping me! [laughing] No, because I take care of them!” (laughing) Whatever he’s done to take care of them… (laughing) I’ll tell you… (interruption) Who? (interruption) Newt? (interruption) Weeeell, no. Three million, and did you see how much he paid in taxes? He got $3 million and he paid almost a million in taxes. He’s paying 33%, Newt’s paying. He made $3.1 million and he paid $999,000 or something, almost paid a million dollars, almost paid a full 33%. But, Snerdley, $3 million ain’t rich. (laughing) Just kidding, folks! I couldn’t resist. I had to defend myself.

RUSH: Hi. How are you? Welcome back. Rush Limbaugh, Open Line Friday. Grab audio sound bite number 15. This is CNN. This is last night on the Situation Room with Wolf Blitzer. He had Jeanne Moos on there, a gadfly infobabe reporterette, and she did a report on allegations by Newt’s wife that Newt asked her for an open marriage; and she talked about this program and a caller to this program yesterday.

MOOS: Rush Limbaugh had to defend Newt to a conservative caller for whom the subject was closed.

CALLER ARCHIVE: An open marriage? I mean, Callista is gonna be the first lady? Are you kidding me?

RUSH ARCHIVE: (distorted audio) We’ve already had an open marriage in the White House, maybe, with the Kennedys. How many open marriages —

RUSH: (laughing) Where do they get the machine that makes my voice sound so gravelly? Or does it sound that way, just not to me? (interruption) Good. Okay, good. (interruption) It’s the way they record it? What, are they still using cassette machines? Is that what they do? A microphone in front of a radio, is that what they do? It must be. It doesn’t sound like it’s a direct audio feed.