X – Butt Sisters are Safe from Newt and Rick


RUSH: This is how, ladies and gentlemen, it all works. I have this right here in my formerly nicotine-stained fingers. It wasn’t long ago, January 7th, we were all minding our own business, trying to keep up with the Republican presidential primary. There was a debate scheduled that night. In that debate, George “Stephy” Stephanopoulos (a Democrat Party hack disguised as an objective journalist) was moderating a Republican candidates debate, and in that debate he asked Mitt Romney what he thought about contraception. And Romney had no clue why the subject was brought up.

(paraphrased exchange) He kept telling Stephanopoulos, “Well, George, where are you going with this? Nobody wants to ban contraception!”

“Yeah, but do you think the states could?”

But there it was. It was thrown, therefore, right in the middle of floor of the Republican debate. And from January 7th on, the notion that the Republicans want to take birth control pills away from the Butt Sisters is now the standard operating thought of the day. (interruption) No, the Butt Sisters. You know, from the song The Troglodytes. Well, here. Put the song in there. This is what I’m talking about. Go ahead and hit it. This is the song.?

JIMMY CASTOR: What we’re gonna do right here is go back, way back. Back into time.

RUSH: What am I talking about with the Butt Sisters? This. 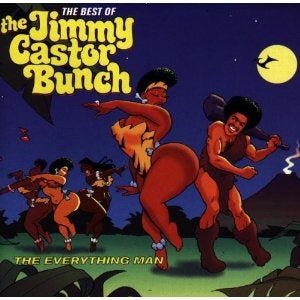 JIMMY CASTOR: When the only people that existed were troglodytes.

RUSH: The Jimmy Castor Bunch, I think. Is that right?

THE JIMMY CASTOR: Let’s take the average caveman at home —

JIMMY CASTOR: — listening to his stereo.

JIMMY CASTOR: Sometimes he’d get up, tryin’ to do his thing. He’d begin to move, something like this: “Dance! … Daaaance.”

JIMMY CASTOR: He’d go down to the lake where all the woman would be swimmin’ or washing clothes or something. He’d look around and just reach in and grab one! “Come here!”

JIMMY CASTOR: He’d grab her by the hair. You can’t do that today, fellas, cause it might come off. You’d have a piece of hair in your hand and she’d be swimming away from you. Ha ha! This one woman just lay there, wet and frightened. He said: “Move! Moooove!”

JIMMY CASTOR: He said, “Wha?” She said: “I’ll sock it to ya, Daddy!” You know what he said? He started it way back then.

JIMMY CASTOR: I wouldn’t lie to you. When she said “I’ll sock it to ya, Daddy!”

RUSH: All the way back in the late 1960s, maybe ’70 or early ’70. That’s The Jimmy Castor Bunch, The Troglodytes, and… (interruption) He died a few weeks ago? I did not know that. I had not heard that. What about The Bunch? The Bunch is still around, but Jimmy Castor passed away. Well, that’s where the Butt Sisters were born, Bertha Butt and her sisters. And it all happened on January 7th, New Hampshire. That that you just heard — that image of Republicans — was born, once again, on January 7th. And that image has been burnished and it has been flourishing ever since. And since that time, President Obama has mandated that the Pope give away birth control pills and practically perform abortions. (interruption)

I know. I said “practically” that the Pope give away birth control pills and perform abortions. “Practically,” I said. It’s what I said! There have been congressional hearings on whether or not the president has the right to mandate such things — and he does not. He’s violating the Constitution — and in those congressional hearings, women ran out, claiming they were not allowed to speak as the Republicans, led by Darrell Issa, wanted to take away their pills. Which nobody has ever said, since January 7th, they wanted to do. The Butt Sisters are safe. And then there is this story from the Cybercast News Service. Here’s it is. February 29th, Leap Day:

“A Georgetown co-ed told Rep. Nancy Pelosi’s hearing that the women in her law school program are having so much sex that they’re going broke, so you and I should pay for their birth control. Speaking at a hearing held by Pelosi to tout Pres. Obama’s mandate that virtually every health insurance plan cover the full cost of contraception and abortion-inducing products, Georgetown law student Sandra Fluke said that it’s too expensive to have sex in law school without mandated insurance coverage. Apparently, four out of every ten co-eds are having so much sex that it’s hard to make ends meet if they have to pay for their own contraception, Fluke’s research shows.”

Can you imagine if you’re her parents how proud of Sandra Fluke you would be? Your daughter goes up to a congressional hearing conducted by the Botox-filled Nancy Pelosi and testifies she’s having so much sex she can’t afford her own birth control pills and she agrees that Obama should provide them, or the Pope. “‘Forty percent of the female students at Georgetown Law reported to us that they struggled financially as a result of this policy (Georgetown student insurance not covering contraception), Fluke reported. It costs a female student $3,000 to have protected sex over the course of her three-year stint in law school, according to her calculations.

“‘Without insurance coverage, contraception, as you know, can cost a woman over $3,000 during law school,’ Fluke told the hearing. $3,000 for birth control in three years? That’s a thousand dollars a year of sex — and, she wants us to pay for it.” All of this just since January 7th. Just since January 7th. You guys who are thinking you’re not gonna go to college? Let me just say one thing to you: Georgetown. They’re admitting before congressional committee that they’re having so much sex they can’t afford the birth control pills! That’s all you gotta come up with. And all of this is the Republicans’ fault. Sandra Fluke, one of the Butt Sisters, is being dragged out of law school by the hair. Wait ’til Rick Santorum hears about this. Wait ’til Gingrich hears about this! What do you think they’ll do? They’ll put a stop to this right away! They’ll head over that university and they’ll stop it!

They’ll spy on Sandra Fluke and interrupt her in mid-coitus, and then they’ll make ’em get married.

Listening to The Troglodytes by The Jimmy Castor Bunch!

RUSH: What does it say about the college co-ed Sandra Fluke, who goes before a congressional committee and essentially says that she must be paid to have sex, what does that make her? It makes her a slut, right? It makes her a prostitute. She wants to be paid to have sex. She’s having so much sex she can’t afford the contraception. She wants you and me and the taxpayers to pay her to have sex. What does that make us? We’re the pimps. (interruption) The johns? We would be the johns? No! We’re not the johns. (interruption) Yeah, that’s right. Pimp’s not the right word. Okay, so she’s not a slut. She’s “round heeled.” I take it back.

RUSH: Well, I guess now we know why Bill Clinton went to Georgetown and why Hillary went to Wellesley. Well, all the sex going on at Georgetown. Sandra Fluke. So much sex going on, they can’t afford birth control pills. She said that to Nancy Pelosi yesterday. Pelosi probably said, “Have you heard what Botox costs? I can relate!”