RUSH: Atascadero, California, this is Madeleine. You’re next on the EIB Network. Hello.

CALLER: Yes. Thank you. During the opening monologue I heard some misinformation coming from the press where they are reporting that Romney made a racially insensitive gaffe —

RUSH: Yeah, about the Palestinians.

CALLER: — when he compared the Israeli culture versus the Palestinian culture.

CALLER: And that is not true.

CALLER: He was making a comparison of cultures in general. I recognized the misquote immediately because I read his book, where he compares culture, education, politics, history, and he shows how they all affect the economy and the wealth of a nation and where they are on the world stage and what their power is on the world stage. He was just talking about culture in general. And he analyzes it very —

RUSH: You’re exactly right. And everybody knows this. But you serve here as the perfect transition to the sound bites that I spoke about. Because this is all about what the press is intending to do to Romney. This is a really good foreign trip of his, and they’re panicked by that, and they’re trying to turn it into one gaffe after another.

RUSH: I want to take you back February 1st, this year, me on this program.

RUSH ARCHIVE: Anybody who thinks that we can nominate somebody who is not going to be the focus of a media destruction campaign is asinine. Whoever we nominate is who the campaign is going to be about. It’s not gonna be about Obama. The media can’t let it be about Obama. If it’s about Obama, he’s sunk. It’s gonna have to be about what a reprobate, racist, sexist, mean-spirited, heartless creep the Republican is. I don’t care who the nominee is. It’s gonna be about that. And they’re setting up Romney as — Romney’s gonna be the Mr. Pennybags, Moneybags, on the Monopoly game board. That’s who they’re setting him up to be. So I agree with you. They come around and say only so-and-so is electable? That’s something that they try to intimidate everybody into silence by saying.

RUSH: Yeah. This is back during the primaries and, well, Romney is the only guy that’s electable. I’m trying to tell the establishment, you can’t nominate somebody safe. You can’t nominate somebody they’re not gonna go out and try to destroy. So let’s move forward. We have a montage. Romney told the truth, and here is a left-wing media montage trying to set it up as a gaffe. 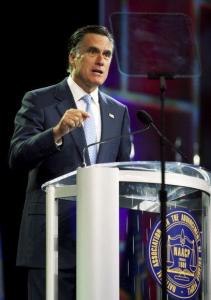 PETER ALEXANDER: The day began in Israel with another diplomatic misstep that forced the Romney campaign on the defensive.

JUDY WOODRUFF: The Palestinians denounced the remark as racist.

WOLF BLITZER: He’s making this kind of what the Palestinians call racist kind of statements.

SARA SIDNER: This is perhaps more upsetting, especially to the Palestinian leadership, than the comment about Jerusalem.

BOB BECKEL: Jews do a lot better because of their culture and the Palestinians economically do not. I thought it was unbelievably outrageous thing.

RUSH: What’s outrageous? It’s demonstrable. Go to Jerusalem; go to Gaza. What is so hard to believe about this? There are profound economic differences — and Romney’s right, it is cultural. I’ll give you another example. Jonathan Chait’s other point was Obama’s, “You didn’t build that.” He says that that’s working, meaning it’s a problem for Obama, because Republicans fear that Obama is redistributing wealth from job creators to shiftless food stamp users. Well, isn’t he? It’s not a fear. It’s a reality. Check the number of new food stamp users since Obama was immaculated. And where’s he getting the money? It’s not a fear. It’s happening.

Now, this business about, you know, there are cultural differences that lead to economic philosophical differences. How many people in this country are saying, “You know what? We need to do what the Palestinians are doing to fix our problems.” How many people are saying that? Nobody is saying that. What this is is politically incorrect. The greatest casualty in American politics today is truth. The one thing that is at the greatest risk in our politics today is the truth, because of political correctness. Anyway, she, the caller, provided a perfect transition into this. The press is doing everything they can to take Romney off his game. In Poland they’re shouting questions at him during a solemn moment at the Polish Tomb of the Unknown Soldier.