RUSH: I just read another op-ed ripping Romney to shreds. You know, Romney’s out there saying that Obama really had a great bribery operation going. And Bobby Jindal just went nuts when Romney said that. In fact, here let me grab this. Let me find them. This is Romney on Wednesday, conference call, campaign donors.

ROMNEY: It’s a proven political strategy, which is give a bunch of money from the government to a group, and guess what, they’ll vote for you. Let me tell you what I would do if I were a Democrat running four years from now, I’d say, “You know what, dental care will be included in Obamacare.” Immigration we can solve, but the giving away free stuff is a hard thing to compete with.

RUSH: Okay. I mean, Santa Claus. It is. Apparently it is dire, Romney saying this. Apparently this is a big problem for the Republican Party. We’re not supposed to look at people this way. People are just insecure. It’s a bad economy. And if somebody’s promised security, workers, they can’t find jobs, they’re not takers and so forth. We’re never gonna win anything if we look at people that way. Grab Baracka Claus is Coming to Town. We gotta put that in here. ‘Cause my whole Santa Claus theory is obviously now under attack by other Republicans. I don’t know how long this will last, so here it is.

Yeah, I’m telling you, folks, fires are breaking out all over the Republican Party. Bobby Jindal, I think Peggy Noonan, J. Pod, John Podhoretz are talking about, it’s such a shame, Romney ran such a great campaign, such a great concession speech, and now he’s just imploding. One of my first takes the night of the election returns coming in was, “It’s hard to beat Santa Claus.” I mean, they are really jumping all over Romney. I thought that it was well known by everybody that the welfare state establishment votes Democrat. Apparently that’s not true.

Even if it is true, the Republican Party doesn’t want to be known as thinking it, because it’s dividing America. It’s dividing America to makers and takers and that’s not what America is, and the Republican Party is never gonna get anywhere if it divides the country into makers and takers, and Romney’s 47% comment, I’m gonna tell you Republicans something. If you want to really get to the bottom of why Romney lost, I’m gonna tell you what I think the most telltale reason is. And when I saw this in the exit polls, powerful, influential member of the media, I got ’em, I got that first wave at 30 seconds after five o’clock, and it didn’t take me another 30 seconds to find that over 50% of voters still blame George Bush for the economy.

If you want to know why Mitt Romney lost, if you’re looking for one reason here or one reason there, you people in the Republican Party had better understand that is your number one reason. If you don’t want to concede that it’s number one, it’s definitely in the top thee. Four years into an absolutely disastrous economy, exacerbated and made worse specifically by policy implemented by Barack Obama, no has spent money like he did. The 2010 elections indicate this.

We just didn’t get that turnout. Barack Obama totally escaped blame, or escaped blame among enough voters. You Republicans running around trying to figure out why the economy for the first time in history did not mean anything in an election better realize it did, and your party got blamed for it. And you better start asking yourself why. The single most destructive force in my lifetime in this economy escaped any blame, and that would be Obama. We figured, how in the world can Romney be hit by this? He had nothing to do with any of these policies. And yet he was blamed. That’s what happens. When Bush is blamed, Romney, the current candidate is not gonna get votes.

You Republicans had better figure out why, after four years of this mess, that included Obamacare, stimulus, real life pain, home values under war on terror, no improvement whatsoever in the economy, I don’t care what anybody said, in real life there was no improvement in wages, gas prices going way up, and a previous president gets blamed for it? You better be able to explain to yourselves how that happened, ’cause there’s a reason. There’s a reason.

You didn’t defend yourselves! You didn’t fight back against the lies. The Bush economy was not a disaster. The Obama economy was the disaster. Bush came out of two recessions. The Bush tax rates, the Republicans still won’t speak up for ’em. The Bush tax rates enabled a really robust — we had 4.7% unemployment through much of the Bush economy. People don’t know it because every day for six years the media was saying we’re in a recession or we’re heading to a recession, and you had Katrina on top of it. The media was trying to convince the people of this country for six years while we had 4.7% unemployment that we’re in the middle of a recession, or at the beginning of one, the economy stinks, it’s horrible. And because of whatever thinking that existed from the White House on down, none of those charges were ever answered, they were never defended against.

The Republican Party doesn’t have the guts to speak up for its own economy, doesn’t speak up for its own ideas. They act embarrassed of ’em. You get mad at Mitt Romney all you want for running around and talking about how Obama bribed some voters, and you can try to make yourselves feel better that that’s why you lost, because Romney divided. But that’s not what happened. When I saw that in the exit polls, I sent it out to my friends immediately. I said, “This is either utter BS, meaning the poll is full of it, or we have really lost the country.” And by that I meant if the Democrats can get away after four years of rampant economic destruction, blaming it on their predecessor — remember how we were laughing every day at Obama blaming it on his predecessor, and everybody is saying, “Grow up, man, accept responsibility,” because we’re thinking nobody’s gonna buy this.

Well, guess what? Well over 50% did buy that it was still Bush’s economy, and they all voted for Obama. You guys in the Republican Party, you consultant class, you can sit out there all day long and beat up on Romney all you want for this postelection comment. Romney, by the way, wasn’t even talking this way during the campaign. But he did say it to that conference call to donors. It’s a proven political strategy, you give a bunch of money from the government to a group and guess what? They’ll vote for you. Can somebody tell me that’s not true? Why do people vote for the Democrat Party? Why? They believe in liberalism? Okay, what’s that? Big government. What’s big government do? Takes money away from people and gives it away to others.

Redistributionist policy. What is that? What is promising people cradle-to-grave whatever they need? The Julia commercial, what is that? The Obama phone lady. I’ll tell you a little secret. The Obama phone plan began under Bush. Did you know that? You think that lady in Cleveland, “Obama phone!” Even if you could convince her that she’s got a phone because George Bush came up with the plan, wouldn’t matter, she’s still gonna vote for Obama, because she’s never really gonna believe that a mean-spirited Republican could give her anything.

Do you remember the first town hall Obama did or one of the first in Tampa where a woman shows up and asks for a kitchen and a new car? I’ll tell you, the defensive scaredy cat nature of the Republicans sometimes amazes me. First, I don’t understand how saying this is dividing the country. The country already is divided. I don’t understand the panic here. But if it’s not the case, if Romney’s wrong, I want to hear how you’re gonna go get these people that vote Democrat. “Well, we’re gonna talk about conservatism and entrepreneurism and we’re gonna talk about the ideals and principles.” I love that. I love that. I just don’t hear it done. I hear it theorized, but I don’t see it. I don’t see Republicans running around talking about the stuff that Reagan did. Well, I don’t.

Snerdley’s in there laughing at me, but I hear all these platitudinous things that we’re gonna say that everybody reacts to, and I know they do react positively to it. I just don’t know any Republican that talks about it much. I just think this defensive nature, that you’re gonna perpetually anger people and they’re never gonna vote for us. The ones that aren’t voting for us now, is that the ones you’re afraid are never gonna vote for us? I’m telling you, folks, the problem here is that the sitting president, the architect of the current economic disaster, the demise of this nation’s free market, the attack on capitalism, just got away with it, with nobody blaming him for it, blaming a Republican for this economy.

There’s a reason. There’s a reason that that happened, and it’s not just that the Democrats and the media were saying it every day. It’s that nobody argued with them about it. We just sat around and said nobody’s gonna believe that. Everybody’s gonna say, “Come on, Barack, grow up, accept responsibility.” They think Obama’s really trying hard. They think he’s rolled the sleeves up. He’s working so hard. He’s had commissions and meetings and he’s gone out and met people and is doing everything he can. He just can’t overcome the mess that Bush made.

RUSH: The New Orleans Times-Picayune just published an editorial: “Governor Jindal Ignoring His People’s Needs.” Governor Jindal is one of the Republican governors that has said they’re not gonna set up one of Obama’s health care exchanges. And here’s the lead sentence of the New Orleans Times-Picayune editorial. “With every decision Gov. Bobby Jindal makes, the message becomes clearer to hundreds of thousands of Louisiana residents who are uninsured: The state has no interest in helping you.” 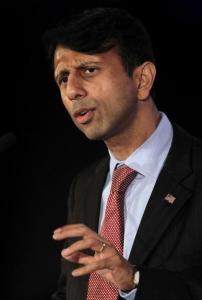 Now, what does that mean? Somebody tell me what that means. The New Orleans Times-Picayune is accusing Jindal of not doing something. What is it? Giving people stuff. “With every decision Gov. Bobby Jindal makes, the message becomes clearer to hundreds of thousands of Louisiana residents who are uninsured: The state has no interest in helping you.” Jindal has no interest in helping you. You’re uninsured, what does that mean? It means Jindal isn’t gonna give you anything. It also means that a Democrat would. But we can’t apparently say that. Because that’s gonna drive voters away.

They’re going after Governor Jindal, who we love here. Don’t misunderstand any of this. I think Jindal is a great future Republican leader. He has a great future in the Republican Party. They’re going after him because he hadn’t set up an Obamacare exchange in Louisiana, and he’s resisting expanding Medicaid, because he understands we don’t have the money for any of this. He understands it. We don’t have the money. And yet there’s the paper, the libs, the media all clamoring for what? Stuff. The implication’s clear. The Democrats will give it to me. “That’s not what people vote for Democrats for, Rush, don’t want to say that, Romney’s full of it.” I swear, this blockheadedness on our side is worse than I thought.