RUSH: Hi, folks. How are you? Great to have you here. El Rushbo, your guiding light through times of trouble, confusion, murkiness, tumult, ignorance, and everything else out there, and it’s Friday. So let’s go.

RUSH: Yes siree, Bob. Open Line Friday where your host, El Rushbo — that’s me, for you low-information voters — takes the biggest show biz career risk since Beyonce left Destiny’s Child. The biggest career risk since Snoop Dogg changed his name to whatever it is, Snoop Lion or whatever. And that’s because when we go to the phones, the content portion of the program is all yours. Monday through Thursday, this program is devoted exclusively to what I care about, to what I’m interested in. On Friday, doesn’t matter, whatever you want to talk about is fine and dandy. And try extra hard to give everything, no matter how stu- — uninformed — a chance to ask me a question that might start them on their journey to becoming a high-information voter. The telephone number if you want to be on the program is 800-282-2882, and the e-mail address, ElRushbo@eibnet.com.

Thank God, folks, thank God the Sandy Relief Bill has passed the House, about half an hour ago. It’s on its way over to the Senate now. I was afraid there for a moment that the gravy train was slowing down, that the pork express might have some problems in it. Of course they were requesting something like $60 billion for this thing. It ended up being $9.7 billion for Sandy relief, and whatever else they can fold into this. I guarantee you there’s gonna be a lot more than just Sandy relief that will be bought and paid for with this money.

Now, another way of looking at this, folks, and this is gonna disappoint some of you. It’s gonna shock and surprise many of you. But another way of looking at the Sandy Relief Bill, $9.7 billion, is that it automatically takes about one-sixth of all the money that Obama raised by taxing all those millionaires and billionaires who make over 400 grand. That money was supposed to balance the budget, $60 billion. A brilliant political move now being praised by the inside-the-Beltway media, including the conservative media, is now praising Obama and praising the Republicans as losers.

The inside-the-Beltway conservative media seems in unison to be saying, “Hey, when you lost, when you got skunked, you gotta do the best you can, and that’s what Boehner and the Republicans did,” and how enthusiastically did we receive that? How heartwarming and inspiring is that? They did the best they could, and anybody complaining about it ought to just shut up, and that means you. So, anyway, the president goes out there, and with his new tax increases on the rich, and that is everybody making over $400,000 a year, I mean, that was gonna give $60 billion, folks. Deficit reduction. The deficit is over a trillion dollars, but that doesn’t matter to low-information voters. It doesn’t matter, the numbers don’t matter.

All that matters is the president said that the tax increases on the rich were going to be balanced and lower the deficit and all that. It didn’t matter if it really happens. The president said it on TV, it made it real. But now one-sixth of that $60 billion is being taken from deficit reduction and spent on Sandy relief. That money was supposed to balance the budget. This isn’t fair. So the Sandy relief money is gonna take away from the funds that were gonna balance the budget out there. I don’t care, no matter what happens, every day you get up and you still get depressed as you can be.

A California law that nobody knew existed except a bright-eyed lawyer allows a convicted rapist to go free because the woman he raped wasn’t married. I’m not kidding you. This is Channel 7, Eyeball News in Los Angeles: “An obscure state law on rape has freed a convicted rapist from prison. The law is controversial because if the victim was married during the crime, the suspect would remain guilty. However, because the victim was not married at the time, the suspect was not guilty.”

You think I’m making this up. I am not making this up. “The appellate judges admitted they did this reluctantly, but their hands were tied by a law many people didn’t even know existed.”

“According to a California appellate judges’ ruling: ‘Has the man committed rape? Because of historical anomalies in the law and the statutory definition of rape, the answer is no, even though, if the woman had been married and the man had impersonated her husband, the answer would be yes.'” But this rapist was smart enough to know that the woman wasn’t married. He simply had to impersonate a boyfriend and then it wasn’t rape.

“‘This provision of the law where it only applies to a married woman as a victim really dates back to the mid 1800s, and while the legislatures had many opportunities to amend and revise the rape statute, for some unexplained reason they never got around to amending this particular statute,’ said ABC7 legal analyst Dana Cole. The night began for the victim, identified as Jane Doe, at a party drinking several beers. She left the party with her boyfriend, Victor, grabbed some fast food, and headed home where friends joined them. According to court documents, Jane invited her boyfriend to spend the night, but since he didn’t have a condom, they decided against it and she fell asleep. Victor then left the room to go home.”

And, see, this is where Republicans don’t understand. They have opposed condom distribution. They’ve opposed contraceptive giveaways. If the Republicans had not stood in the way of condom distribution, condom machines in every apartment complex, this wouldn’ta happened. You can trace this probably back to some thing that Bush refused to allow, because there was no condom. Victor, Jane, didn’t have a condom. So Victor leaves, probably depressed. Victor wanted to have sex but there wasn’t a condom. So he leaves, the friends leave, they’d all had fast food. Jane Doe had also consumed adult beverages. Victor leaves. And the prosecutors say that Jane then went to sleep. And after Jane went to sleep, she “woke up to the sensation of having sex.”

Now, again, this is probably a very common occurrence in California. So Jane is there consuming adult beverages, fast food, and wants to have sex with Victor. But Victor doesn’t have a condom! The evening’s blown (so to speak). Victor leaves. The friends leave. She goes to sleep and wakes up to “the sensation of having sex.” When the light goes on, and only when the light goes on… (This is not good news for Victor.)

Only when the light goes on does she discover it isn’t Victor. Can you imagine poor Victor in this story? Some guy off the street impersonates him and gets away with it? Anyway, she then screams and shouts, “Rape!” The Victor impersonator, having accomplished most of the task, then extricates and exits the scene. She then, I guess, saw enough of the guy to get him apprehended and charged.

And then the law said, no, she’s not married. Therefore, it’s not rape. And, no, this is not Sharia. (laughing) It sounds like it could be, but it’s not. And so that’s that. So now, because the law hasn’t been changed, rapists in California, all they have to do is figure out whether a woman is married or not. And then keep a sharp eye on boyfriends who leave because there aren’t any condoms around, and make their move.

Ali Velshi, the CNN economics editor, ladies and gentlemen… Let me take a break here because I don’t want to have to break this up. But Ali Velshi is a bald-headed, Yul Brynner looking guy on CNN. He’s their economics editor. Last night on Anderson Cooper 360… By the way, did you see what happened to Anderson Cooper on New Year’s Eve on CNN? (interruption) You didn’t see this? You didn’t hear about it?

His clothes were on, but what she did… This is all over E! Entertainment Television. It was all over TMZ. I saw it on Entertainment Tonight, too. She was smooching Anderson Cooper. (interruption) Well, below the belt. Exactly. The nether regions. She was smooching Anderson Cooper’s crotch with his clothes on. Yeah, Anderson was giggling and saying, “No,” and of course everybody knows when a guy says “no” he means “yes.” So she kept it up, and this has been the talk of the entertainment industry.

This was over at CNN, folks, with Jeff Zucker now in there to straighten out CNN’s image, to have it more news oriented and so forth. Meanwhile, over at Fox, Bill Hemmer and Megyn Kelly look like a 30-year-married couple that wish they were at home. So this was happening on CNN. Anyway, Ali Velshi is the economics reporter at CNN, and he was on Anderson Cooper’s show. Anderson Cooper wasn’t there. They had a guest hostette, Ashleigh Banfield, who used to be over at MSNBC.

She did part of a troika show with Mika Brzezinski and there was one other babe there and they discussed things like childbirth and contraception, real interesting stuff, and so she’s now the co-host of the Anderson Cooper show. Ali 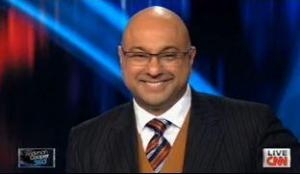 Velshi was talking about economics, and he was saying that Americans now finally understand it. There aren’t any low-information Americans on economics now. They all get it. Every American understands it.

But Americans now know the Republicans are wrong, that the debt ceiling has nothing to do with spending. So we have that sound bite, and thought we would illustrate with other sound bites how in fact low-information Americans actually do now understand economics. Velshi may be right.

All that coming up after this.