RUSH: If you’ll indulge me, I want to go back to February on this program, February 13th. On February 13th, a New York Times story came out, a polling data story, and that’s when the light went on in my head that led to my creating the Limbaugh Theorem to explain why — with the country going to hell in a hand basket and the country going in directions that a majority of people opposed — Obama’s approval numbers kept rising.

I asked, “How is it that Obama’s policies, which are responsible for the nation’s decline, did not attach to him? I mean, the very people who did not like and do not like the direction the country’s going say they approve of the job Obama’s doing! How in the world is…?” Because it was the first time — the first time in my professional career — that a plummeting, plunging, horrible economy had not harmed a president’s standing, reelection, polling data, you name it.

But there was story in the New York Times that just…

it was like the biggest bolt of light I had ever seen.

It finally became clear to me — and so, the Limbaugh Theorem was born, and I have explained it countless times, maybe more times than you would rather hear. But, I must spend some time on it today, because it’s been discovered by the New York Times.

The writer of the story, Peter Baker, is being credited as a genius for figuring it out. I’m not mentioned in the story. But I want to take you back for just a couple of minutes here.

For those of you new to the program, this will be the first time you’ve heard this, and it’s enlightening.

RUSH ARCHIVE: Obama is not seen as the guy who does not like the way the country was founded and is trying to take this country in a different direction. He’s not seen at all in the way he really is. … You may have figured this out long ago, but it just hit me — and if you figured it out long ago and you’ve been trying to get through here and tell me, I wish you’d have gotten through. For those of you who figured it out and I didn’t, I’m just now getting to it. I apologize for being a late arrival to the party, but now — now — it all makes sense.

For five years Obama has never once allowed himself to be seen as governing. He is constantly campaigning against mysterious forces who have ill intentions trying to harm you and this great country. There are these figures behind the screen, behind the curtain. Romney was one. Bush was one. There are others. Obama’s trying to expose them. Throughout history dictators, for example, have never really been blamed for the bad things that happened in their countries.

Hitler, Stalin, Mao, Castro, none of them were blamed by the rank-and-file citizenry. They were, instead, the leaders of the revolution! … This is what you and I are gonna have to learn and learn fast. No matter what is said, no matter what evidence happens, no matter what’s reported, it will not be possible to connect Obama to the negativity that’s happening in the country today because he’s campaigning against it himself. That’s the reason for the perpetual, never-ending campaign. It is why, in eight years, he will never allow himself for even one day to be seen as actually governing or presiding over any of this.

RUSH: That’s why constantly blaming Bush, blaming what he inherited, the big mess. It was worse than he thought. The constant campaign allows Obama to adopt the same position on all this that most people do. They don’t like the job situation. Obama’s out campaigning. He doesn’t like it, either! He’s working hard to fix it. Therefore people do not associate the economy with Obama’s policies. Specifically, now, the low-information crowd. They do not. That has been the purpose of the never-ending campaign. 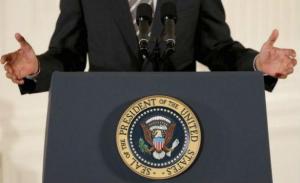 It was the New York Times story that showed this in polling data, and the headline… I can’t recall it. I’d have to go get it from my Evernote file. I didn’t know this was gonna happen today, so I don’t have it at hand now. I’ll have to get it during the break, but I’ll get it, ’cause it’s eye opening. I really felt this was an important discovery, the Limbaugh Theorem. Even today, even after discovering it in February, Obama continues to practice it. He’s still on the campaign trail.

Now he’s campaigning on what? Obamacare!

I thought this was profound, folks.

I mean, in the world of politics, to be able to effect this kind of change and transformation and not be held accountable for it when you’re president? This is a profound political achievement. Because in Obama’s case, he is employing policies that are ruinous. He’s employing policies that are doing great damage to the US economy. People don’t like what’s happening, but they don’t associate him with it. He’s not seen as governing.

He’s seen as opposing these mysterious, powerful forces making all this happen. So let’s now jump forward to today. The headline in the New York Times: “In Second Term, Obama Is Seen as Using ‘Hidden Hand’ Approach,” by Peter Baker. “In the nearly two weeks since Egypt’s military seized power, President Obama has promoted a better federal bureaucracy, given a medal to George Lucas of Star Wars fame and had former President George Bush to the White House for lunch.

“What he has not done is publicly address the violent upheaval in Cairo. That is not to say Mr. Obama is uninvolved. In the privacy of the West Wing, away from the cameras, he has made calls to leading figures in the Arab world and has met with advisers trying to influence the crisis. But his low public profile on issues like immigration, Syria and health care underscores a calculated presidential approach that admirers consider nuanced and detractors call passive.”

Well, I have called it a way to avoid all responsibility, and that’s what it is.

Obama has perfected — and I’m telling you: In the world of politics, this is genius, folks.

Now, it couldn’t happen without a slavish, supporting media. But even with that, he’s got it, but he knows how to use it. Barack Obama has managed (we’re now 5-1/2 years in) to avoid all responsibility for everything that is happening, everything that’s going wrong, and most is. There isn’t very much going right. I submit to you that any other president who had authored policies resulting in these realities would be on the hot seat, would be sitting there with a 20% approval rating, and there’d be nothing but public disgust and animosity aimed the president’s way every day.

That’s not happening here. So now the New York Times has finally figured this out. “While other presidents have put the bully in the bully pulpit, Mr. Obama uses his megaphone, and the power that comes with it, sparingly, speaking out when he decides his voice can shape the trajectory of an issue and staying silent when he thinks it might be counterproductive. In his first year, the president seemed to be everywhere, talking about everything.

“In his fifth year …it appears he is not always in command of events,” but he always is. So in a nutshell, the New York Times piece is an attempt to tell its readers that Obama really is on top of things, especially Egypt, even if it appears that he isn’t. So, folks, I’ll pat myself on the back here. (patting) It is another red letter day for EIB, because the New York Times has officially confirmed the Limbaugh Theorem. Just a couple of weeks ago, Gallup embraced the Limbaugh Theorem as well.

The Times doesn’t call it that. They never will; they never would. They call it Obama’s “‘hidden hand’ approach.” They have to go all the way back to Eisenhower to find some precedence for Obama’s flight from responsibility. So let’s now go to the audio sound bites. Norman Ornstein is a highly respected, well-thought-of political scientist at the American Enterprise Institute and a resident scholar there.

Now, for those of you in Rio Linda, that doesn’t mean he lives there. It just means, as a “resident scholar,” he practically lives there. He doesn’t work anyplace else. He’s really high up on the scholar ladder. He was on C-SPAN’s Washington Journal today, and the host, Greta Brawner, said, “Peter Baker, New York Times headline: ‘In Second Term, Obama Is Seen as Using “Hidden Hand” Approach,'” and here’s what Ornstein said… 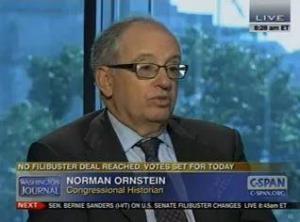 ORNSTEIN: Peter Baker is a terrific reporter. This is a very good point, particularly in this sense: Our political dynamic is such that you’ve got a substantial number of Republicans who will reflexively vote against something if Barack Obama is for it. We know that when Obama wanted to come out for the immigration bill, his allies in the Senate said, “Don’t do that! Because if it becomes the Barack Obama Immigration Bill, we aren’t gonna get the 60 votes that we need.” So he’s had to adjust his style to step back from much of this legislation and play a passive-aggressive role; let it go forward without his direct involvement. There’s a lot of administration involvement behind the scenes.

RUSH: And so Ornstein is acknowledging the

Limbaugh Theorem without acknowledging Limbaugh, and instead acknowledging the greatness of Peter Baker, which is fine and dandy. But these guys still don’t quite get it. They still have to tell themselves, their readers and viewers, “Hey! Hey! Obama is in charge. Don’t sweat it. It might look like Obama doesn’t know what he’s doing, but he does. He does! He’s got his hands on everything. He’s running Egypt. Don’t sweat it. Don’t sweat it, readers.”

What they’re missing is that this country is a disaster, that this economy is a disaster, that the people of this country are as dis-unified as any time except the Civil War, that this country is roiled. It’s an absolute mess, and Obama has made it that way. But he has avoided any responsibility for it. That’s what they’re missing. They are only taking it to the point, “Well, Obama knows that if he’s gonna get immigration passed, it can’t be the Obama Amnesty Bill.” That’s not what it’s about. It’s a way to advance his agenda despite public opposition to it, and then escape any accountability or responsibility for it.

It really is an amazing sleight of hand.