RUSH: I don’t want to lose control of myself here. That’s the wrong way to put this. I don’t wanna lose my head here. But a lot of yesterday’s program is reflected in the Drive-By Media today, and that seldom, if ever, happens. Two things: The Drive-By Media reaction to Obama’s speech yesterday is exactly — not exactly — but very, very, very, very close to what you would get here. And the Drive-By Media reaction in many places to the Anthony Weiner — “Nick Danger,” whatever — Tony, and Huma Abedin press conference yesterday is pretty close to what happened on this program yesterday. There are a lot of Drive-By Media outlets, not all, CNN is still very sympathetic to Huma Abedin, but there are a number of Drive-By Media outlets who think Weiner’s gotta go now. And there is a huge backlash against Huma, because the bottom line is, Weiner isn’t Clinton.

The story was that Hillary is Huma’s mentor, and that Hillary took Huma aside, at her knee, as it was, and said (imitation), “This is how you do this.” But there’s a big difference. Whatever you want to say about Bill Clinton, he was popular within the party. Within the Democrat Party, he was popular when all that went down. Bad choice of words. He was popular during the Lewinsky stuff and all of the scandals with the women. He was still scoring big. He was still really popular with the Democrat Party.

Weiner’s not. Democrats outside of New York wish this guy would go away. There isn’t a whole lot of respect for him. Folks, there’s a low-information site today — well, it’s The Blaze, but they’re not the source. They’re sourcing something that’s low-information. Weiner is now being laughed at in ways that never happened to Clinton. I’m just gonna tell you, they’re making fun of how quickly Weiner ejaculates during phone sex. He doesn’t last more than 20 seconds, that’s the story. I mean, when this kind of stuff starts happening to you… this never happened to Clinton. So the idea that Huma can do Hillary and save Weiner the way Hillary saved Clinton probably doesn’t wash, and they’re beginning to see that out there.

Now, don’t misunderstand anything. I’m the one who has repeatedly told you all of you, “Do not look for any signs of success in the mainstream media as an indication that things are changing.” And I’m not doing that. I’m just telling you that things are becoming so obvious now that the Drive-Bys cannot escape it, and in many cases they cannot avoid reporting it. Forget Weiner for a second. Let’s start with Obama’s speech yesterday. It is being panned in a number of places. It was panned in a number of places while it was taking place. It was made fun of even before it started, places like F. Chuck Todd at NBC. People have caught on.

“Seeking to build momentum for looming fiscal fights, President Barack Obama on Wednesday cast himself as the champion for middle class Americans struggling to make ends meet. He chided Washington for having ‘taken its eye off the ball’ and declared that the economy would be the ‘highest priority’ of his second term. … Obama, as he often does when criticizing Washington, glossed over his own status as the inhabitant of the city’s most powerful office. … Indeed, the president’s remarks were void of new policy proposals or fresh solutions for breaking Washington stalemates. And there were no new approaches presented for resolving potential showdowns with Republicans this fall.”

So the AP is calling Obama out on this. And then there is Ron Fournier, the former AP bureau chief, White House correspondent, now over the National Journal, and he tweeted the following this morning: “If leadership was merely about speaking to the converted, winning fights and positioning to blame, America would be in great hands. White House is failing.” White House failing. That’s a hashtag at Twitter. Fail is a hashtag. Now, I don’t care about Fournier throwing in the House, hashtag fail in this tweet. The president is the only important player in any leadership role. This tweet was a reaction to an incredibly boring, weak speech from the president.

“If leadership was merely about speaking to the converted –” So Obama’s going out and talking to college kids. Big whoop. He’s going out, he’s preaching to the choir. He’s simply trying to win fights with the Republicans and blaming them, but he’s not accomplishing anything. Then the UK Telegraph in a piece by Nile Gardiner: “ItÂ’s been a rough few weeks for Barack Obama. A wave of scandals has undermined trust in the White House, and a series of major polls has hammered the president in the first year of his second term.

“TodayÂ’s speech at Knox College, Illinois, was supposed to be the presidentÂ’s come-back moment, the first of a series of addresses aimed at retaking the initiative by the White House. Instead it was a train-wreck. In an hour-long address, which seemed to last forever (and par for course started 15 minutes late), the president spoke in deeply partisan terms, often with bitterness and anger, lambasting his political opponents, dismissing criticism of his policies, and launching into his favorite theme of class warfare, attacking the wealthy and what he calls the ‘winner takes all economy.’

“Obama is no Ronald Reagan, who always sought to bring the country together based on the common ideals of the Founding Fathers. President ObamaÂ’s message will do nothing to reassure a skeptical American public.”

And another pull quote: “Obama spoke the language of decline, promising more of the same left-wing policies that have weakened US competitiveness, eroded economic freedom, and have saddled the world’s superpower with historic levels of debt. Americans deserve better than the failed statism that has bankrupted cities like Detroit, and threatens to do the same to the rest of the country.”

So the British press gets it full on.

The AP and Ron Fournier are tiptoeing around it.

There are still some Drive-By outlets that are getting the vapors as their idol speaketh, so to speak, but I’m telling you: Five years in, or 4-1/2 years in, this speech was received almost everywhere with disappointment or yawns or, “Been there, done that; been there, heard that.” Now, the reason for my pointing this out to you, folks. Obama’s not running again, so this is not to really affect public opinion on Obama so much.

That’s not the point.

There is another point, and that is there are a lot of things coming up that will require or be aided by Obama’s popularity. You know, we still have to deal with the final implementation of Obamacare. We’ve got the exchanges to be fully funded and implemented by the first of the year. There are a couple of other things, and there is one last chance to stop all that.

There’s one last chance to stop it all, and that’s in the next continuing resolution budget fight. The current continuing resolution that is funding the government as we speak expires on September 30th. So there are talks about a government shutdown, as there always are. There always are talks about a government shutdown. The press brings it up trying to intimidate the Republicans.

But denying Obama and the Democrats their continuing resolution on September 30th is looking to be a crucial thing, a very important and strategic thing. If the Republican Party does want to get in the game and push back, that would be where. We’ve got the August recess that kicks off, I think, next week or the week after. That’s when members of Congress are gonna go home, and that’s when they might conduct town hall meeting.

That’s when they might hear from you that they’re not happy and they want some push-back. We will be discussing that as the program unfolds, both today and in subsequent programs. Now, because of this, the last three really crucial elements that will cement Obamacare as an entitlement will be almost impossible to repeal. That happened on January 1st. Obama’s also, in addition now… 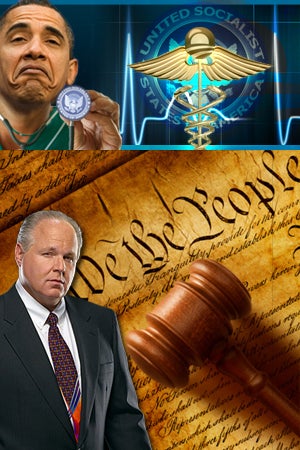 One of the reasons he’s making speeches on the economy (boring, dull, repetitive) is these speeches themselves are a distraction, I think. Because Obamacare is it. Obamacare is it. Immigration as an issue off to the side, too, but the 2014 elections for the Democrats are really what they’re focused on. Winning the House in 2014. That’s what everything’s about.

I still think that the Democrats’ position here on amnesty still may be primarily oriented toward losing the issue and having it as a campaign issue for 2014, not getting amnesty this time around, but actually using it as a campaign issue, based on the polling data that we’ve seen this week that shows the illegals living in the shadows will vote Democrat eight to one. The Democrats see polling data like that, and they’re content to say, “You know, let’s delay amnesty couple years.

“And let’s set it up so the Republicans look like they’re the ones that defeat it and then we’ll run and try to win the House in 2014 on the basis that Republicans hate Hispanics. We got polling data to back it up and they may be further oriented toward not passing the Gang of Eight’s bill in the House, and actually have it go down in flames.” But Obama is also going to be out selling Obamacare — and selling Obamacare, as you know, is about the 2014 midterms.

Because they remember what happened to ’em in the 2010 midterms, which was all about Obamacare. So everything Obama’s doing is nothing to do with substance, folks. It’s all strategizing. It’s all aimed at the 2014 midterms. Sure, the speech on the economy kicks off the next two-month campaign on the economy. Yeah, it’s aimed at conditioning the Limbaugh Theorem, the idea that Obama’s got nothing to do with it to protect his poll numbers.

Which are plummeting, by the way, in a number of different ways. He’s at 45%, I think, in the NBC poll or CBS, one of the two. His approval number is as low as it’s ever been. There are some people that are nervous out there, folks, and not so much about Obama ’cause he’s it. I mean, he’s in for now. No other elections in his future. But he’s still the standard-bearer, and the Democrats have grand designed on the country.

And he’s the, of course, leader in that regard. So his popularity is still rather important to ’em, but not from the standpoint of him winning elections. So we have Obama out continuing to act as an outsider. Everything remains oriented to class warfare and blaming the Republicans for every problem that exists. If I had to sum up the Obama strategery in one sentence, that would be it.