RUSH: Last night on Breitbart this came in over the transom. Try this headline: “Experts Conclude: Limbaugh Plan Better than Obama’s Stimulus.” And I said, “My gosh, who remembers that? That’s five years ago.” And Joel Pollak writing in Breitbart: “In 2009, at the height of debate about President Barack Obama’s stimulus plan, conservative radio host Rush Limbaugh proposed a compromise in the pages of the Wall Street Journal that would have devoted half the stimulus to tax cuts. Now, a new working paper by the National Bureau of Economic Research (NBER) concludes that Limbaugh was right, at least in terms of that portion of the stimulus that was directed to state governments.

“The paper, by Gerald Carlino and Robert P. Inman, finds that ‘ARRA [American Recovery and Reinvestment Act], the stimulus, the Porkulus, “assistance would have been 30 percent more effective in stimulating GDP growth had the share spent on government purchases and project aid been fully allocated to private sector tax relief and to matching aid to states for lower-income support.’ In other words: Tax cuts and cash transfers would have been better. The new research partly answers the challenge Limbaugh laid down in January 2009.”

And I remember that. I mean, I wrote the piece. Everybody was calling for bipartisanship and I was offering to help. I didn’t think the stimulus was gonna work. I knew it wasn’t gonna work. It was not possible for it to work. Let me explain to you why, because I know we get new tune-in here each and every day as people desperately want to learn more and more about politics these days. Ahem. So the federal government’s gonna stimulate the economy, right? The first question to ask yourself is where does the federal government get money? Besides printing it, where does it get money? 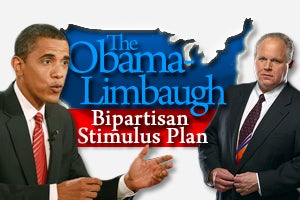 It takes it from someplace, right? It gets money via taxes and fees and services and bribes and kickbacks and what have you, but it all comes, no matter how they get it, it all comes from the people who produce it. And where does that happen? It happens in the private sector. It happens in the economy. It happens on Main Street. It happens on Wall Street. It happens at the mall. It happens at the gas station. It happens everywhere commerce takes place. It happens everywhere goods and services are bought and traded. That’s the only way government gets money. Well, they could sell some federal land, but they don’t produce income. Government destroys wealth. They do not create wealth. They print the money for the money supply, but they don’t produce anything. Government has what it has via taxes.

Okay, so if the government doesn’t have any money, and it’s going to stimulate the private sector with money, where’s it gonna get it? Well, it has to first take it from the private sector. So, in this case, let’s just call it a round number of a trillion dollars. Obama and his regime say, “We’re gonna prime the pump. We’re gonna goose the private sector. We’re gonna put a trillion dollars in there, and that’s gonna cause all kinds of new economic activity, and it’s gonna cause all kinds of job creation, and with it we’re gonna get road repair and bridge repair, school repair.” This is how he sold it.

Now, nobody stopped to think, “Well, wait a minute. Where’s the trillion coming from?” They just heard the trillion dollars being injected like with a syringe and thought, “Wow that’s cool.” But in order to get that trillion they had to take it from somewhere and they took it from the only place they can take it, the private sector. So they had previously taken a trillion dollars out, they didn’t have it anyway, they were in debt, but they didn’t stimulate anything. If I take 10 dollars from you and then give it back to you as a stimulus, it’s a wash. You don’t have any more money than you had and I’ve lost what I took from you.

It found its way to Wall Street, bought some stocks and bonds, paid off the second home in the Hamptons, hired a butler, fine and dandy. But that’s as far as it went. They’ve been priming the pump, and we’re losing jobs. People are losing jobs and leaving the job market. I mean, the economy is shrinking. We got 90 million people not working after five years of stimulus, led off by the first one. So I said in my proposal that was carefully crafted in the Wall Street Journal, let’s take the election results, be bipartisan, and say Obama won 53 to 47, just use the numbers.

I said, “Give me 47% of that trillion to do with as I would do it, and, Mr. President, you’re the winner, you keep 53%, so you keep $530 billion, give me $ 470 billion, and I’ll do with mine what I do, and you do with yours what you do, and we’ll see what happens.” And I said, “With mine, tax cuts. I would literally keep more money in the private sector. I wouldn’t take anything out. I would give tax cuts to producers; tax cuts to small business; tax cuts to earners; tax cuts across the board; marginal income tax rate cuts and keep more money in the private sector to compensate for Obama’s removing it,” which is what Obama’s stimulus did.

Obama’s stimulus didn’t do anything except stimulate the government. Obama’s stimulus took money away. My plan was to at least get nearly half of it and keep it in the private sector, and then we compare. And of course the idea was rejected because Obama never intended to stimulate the private sector. He only wanted people to think that’s what he was doing. His intention was to grow the government and eventually get to this health care plan that we’ve got now and eventually get to every other boondoggle of a federal problem that we’ve got. All of this has been by design.

So these guys, Gerald Carlino and Robert Inman at the National Bureau of Economic Research, concluded after studying all this five years later that I was right. “The new research partly answers the challenge Limbaugh laid down in January 2009: Let Obama devote 54% of the stimulus to ‘infrastructure and pork,’ in accord with his share of the 2008 vote, and let the remainder go towards corporate tax reductions and capital gains tax suspensions. ‘Then we compare.’ The ‘Obama-Limbaugh Stimulus Plan’ –” that’s what I called it. He won, put his name first, “– was never passed, of course, but the NBER paper provides a comparison. President Obama and the Democrats often claimed that the stimulus did provide tax cuts — but they were only typically available under restricted conditions, and constituted a smaller part of the total.”

Well, remember what the unions are for the Democrat Party. They are a very sophisticated money-laundering scheme, for all intents and purposes. Because every union member has dues taken from his earnings, and that money is largely cycled back to the Democrat Party in the form of campaign ads, donations, and what have you. So $318 billion of Obama’s stimulus just came back to him, the Democrat Party. It’s a money-laundering scheme. It’s easier to do it that way than trying to go to the Treasury, just write a check to “Barack Obama Esquire and Democrat Party, et al.” You try to do that, even Obama’s Treasury secretary, Timothy Geithner, might say, “You know, that’s a little tough. I don’t think you can just come here and raid the Treasury, but if you run it through your union buddies, no problem.” That’s what they did.