RUSH: By the way, ladies and gentlemen, we had a call yesterday from a woman named Denise in Colorado who was calling to express her thanks. One of her kids had read Rush Revere and the Brave Pilgrims. She sent Liberty — the talking, time-traveling horse — a fan e-mail. Liberty is kind of out of control. When he gets e-mail, he just goes nuts. He sent this kid an audio version of the book and one of the bears from our little shop, Ted-Tea Bear.

Denise was calling ’cause she went out and bought a book, and she said, “You sent a note, and you send us back the audio version and a bear!” So she was calling to say thanks, and she said, “Look, I’ve got some pictures of my girls with the book and with the bear, and I’d like you to see them.” I said, “Well, there’s a way. If you look, you can find a way at TwoIfByTea.com website to submit them there.”

But I relented and I told Snerdley to give her our super-secret server address, and she sent the pictures, and we just posted ’em at RushLimbaugh.com with the story from the call yesterday and the transcription. And I told Koko, “Move it to the top so it’s at the top at RushLimbaugh.com,” and there’s one other thing that we got yesterday in the e-mail from a member of the audience that I want to share with you when we get back.

Okay. This took a little bit of doing, ladies and gentlemen. I just had to share this with you. It’s just the kind of stuff that I never thought I’d be doing. When you plan or envision a career, certain things — obviously a lot of them — you don’t expect. This is one. In fact, the book, Rush Revere and the Brave Pilgrims, and the attachment that kids are now having is mind-boggling — and yesterday, we received an e-mail.

“Dear Rush. At the Thanksgiving table my seven-year-old grandson, Nicholas, who had just finished your wonderful book was so inspired that he said he would like to give the prayer. Everyone folded their hands and listened in anticipation. With heads bowed, Nicholas started out by saying, ‘You can do this, Nick.'” Seven years old. “At that point, we all knew we were in for a surprise. He then went on with a prayer, thanking God and the Pilgrims and described our first Thanksgiving.

“I’ve attached the prayer video. I’ve reduced it in size, so hopefully it’ll come through. Now, when Nicholas went back to school after Thanksgiving break, the teacher asked her students what they enjoyed most about the holiday, and Nicholas said that he was so proud to give the prayer and that he learned about Thanksgiving from Rush Revere and Liberty, and he still beams with pride for being able to have that moment to thank God, and tell his family about the first Thanksgiving.

“Thank you, Rush, for making history come alive through your book. We can’t wait for your next adventure to come out in print.” This is sent from Nick’s grandmother, Susu. S-u-s-u. “My mom said to tell you that she is in love with you. She’s 88 years old this month, and we both listen to you every day.” So we got the video, and listened to it. Nicholas is at the far end of the table, and the camera is at the other end of the long table, and he sounds very, very far away, and there was ambient room noise.
When I listened to it, I couldn’t understand it. So I sent it up to the broadcast engineer and the staff up there and said, “Can you guys understand it? I’d like to play this. It’s just 43 seconds and I’d like to play this, but if people can’t understand it, it wouldn’t make any sense.” So they listened to it, and they said, “It’s not gonna work, Rush. There’s just too much ambient noise and there’s other people making noise and laughter, and we can’t really understand the kid.”

I said, “Is there nothing we could use? The disgronificator, EQ? Is there nothing you can do to boost some of the midrange?” Anyway, Mike Maimone spent time EQing and toying around with this audio so that it would be usable, and he’s got it. So we have it here, and I just want to share it ’cause a seven-year-old kid. This is the kind of thing my mom and dad wouldn’t believe. A seven-year-old kid who read the book and wanted to say grace at his family’s Thanksgiving to tell them about the first Thanksgiving, and thank God for it. So here it is.

Now, listen carefully. He’s far away from the microphone here. You might want to turn up your potentiometer. Turn the volume up.

NICHOLAS: All of us would not be here today if the Pil — if the voyagers of the Mayflower did not land on Plymouth Rock, and they would not be — and we all — and they would not have survived if they didn’t learn how to hunt, fish, or plant crops. So we thank the Pilgrims and their Lord for helping us to live and teach the children and their children to live in a free country. Amen. 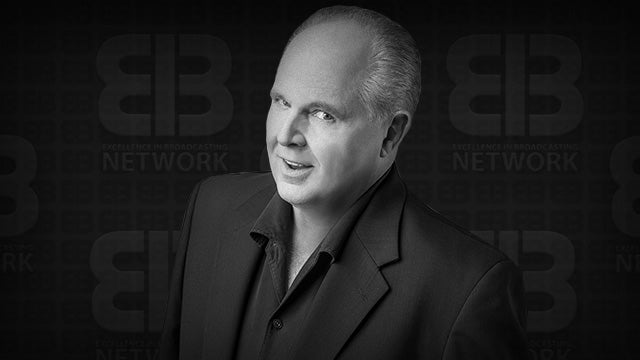 RUSH: And they all applauded Nicholas, and they were very proud of him and so forth, and that’s how that family did Thanksgiving. I’m told everybody could hear it very clearly, so a sincerely thanks for the broadcast engineer, Mike Maimone — with, of course, the associated help of Kit Carson who was providing advice and consent on whether or not it was good, the moral support and everything else. So we’re gonna send the video of that over to Koko at RushLimbaugh.com to post so you can see it the next time you visit RushLimbaugh.com, and it’ll end up at TwoIfByTea.com. We’ll probably put on our Facebook site.

Now to the phones. (interruption) What? Snerdley is asking me, “Doesn’t that make everything worth it?” Look, as you know, I get embarrassed talking about myself. Yeah, it does make everything worth it, and then some. This is exactly the purpose. I mean, here’s a seven-year-old who may not have learned the truth about the Pilgrims. I don’t know about his school system. He may have learned the multicultural version, that America’s guilty. So, yeah, it makes it all worth it. That’s the exact purpose of the book, is to reach people, young people, like him, in an entertaining way, to actually learn the truth and be proud of their country. Like we all are. That really isn’t taught enough anymore.

Speaking about hip, it’s hip to think that America’s guilty of things. It’s hip to think that America’s imperfect and flawed and that somehow there’s virtue in recognizing the fraud that is America. And of course in my view and yours, this is the greatest place ever, despite it’s flaws. I’m very proud of the way I was raised. I’m proud and I love this country, and I want everybody to. So, yeah, it’s hugely worth it. But you know me. I don’t like talking about myself here. The young Nicholas audio speaks for itself.