The real question is — and I don’t know Robert Gates — you know, this is becoming a trend. You got journalists who are covering campaigns who do not report things that could have impact on the outcome. They save these things for a book long after the election is over. They are in it for the money, which is fine with me, except journalists are the ones that attack people like me and conservatives for being in it for the money.

Now, here’s Bob Gates, and everybody that talks about Bob Gates has nothing but great things to say about him, great character, integrity, morality, all that. I don’t know him, and I don’t dispute that, but it is clear that Bob Gates knew a bunch of stuff that he held in reserve for a book long after the release of any information would have any impact on anything. Can you imagine if the people of this country had been told that Obama’s opposition to Iraq was purely political?

Gates says he’s in a room and Hillary and Obama are there, and Obama says (imitating Obama), “Hillary, you know what? My position on Iraq, purely political. I had to oppose you in the primaries.” And Hillary says (imitation), “Well, my opposition to it was political.” We all knew this. Everything the liberal Democrats do is political. This is my point and I think it’d be really helpful if a whole bunch more Americans knew that. You know, Obama and Hillary get away with supposedly having principled opposition to the war in Iraq, and there was nothing principled about it; it was all political. And then here’s Obama (paraphrasing), “I don’t think we should go into Iraq. We need to be in Afghanistan. That’s where this thing started. That’s where the War on Terror started. That’s where we need to go.”

Then we find out he’s not even committed to it. We find out that his involvement in Afghanistan is perfunctory at best. But, you know, the real problem with that is, there are real men and women that he’s sending into harm’s way in something he doesn’t believe in. Nobody, by the way, is saying what Gates said isn’t true. The left is going through pretzeled conniption fits trying to react to that. 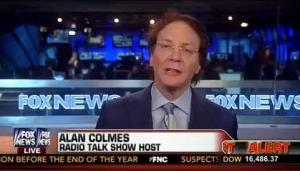 RUSH: I watched Alan Colmes today on Fox. It’s hilarious watching these libs try to explain this all away.

(imitating Colmes) “Well, you know, at the end of the book Gates talks about how much he appreciates Obama and how much he loves Obama and how qualified Obama is and how dignified Obama is.” I’ll tell you why I think Gates put that in there. I think he put it in there probably ’cause he means it, but it also gives his criticisms added oompff. If he had just launched into criticism of Obama and there wasn’t anything in there that was complimentary, then people would say, “He’s just got it out for Obama for some reason,” and discard it.

But all through the book there are positive references to Obama balanced by these serious criticisms — and the positive references give the criticisms, I think, even more oompff. I mean, I have some of the highlights of the Gates book. I really haven’t touched on ’em. I mean, Obama’s heart wasn’t in Afghanistan but he sends people in harm’s way to a battle he doesn’t believe, a war he doesn’t believe. Oh, and the other big one is as opposed to George Bush.

Gates says Bush loved hanging around military guys. He loved to have the generals, the admirals and all that up to the White House, and he really learned from ’em and he enjoyed ’em. Gates says Obama couldn’ta cared less. He’s totally uninterested in the military. What’s the surprise about this? These people are liberal Democrats. We know that they hold the military in disdain. We know that they think one of the biggest problems in the world is US military, and the only reason it should exist is for Meals on Wheels programs around the world.

We know they disdain the military.

We know that they make every calculation political. Obama and Hillary don’t know enough about the surge. They opposed the surge in Iraq before the surge had been announced. Remember the Petraeus hearings? They called him a liar before he’d even said anything! Of course it was what…I don’t want to sound like I’m calling everybody dumb. That’s not it. I’m frustrated. This ought not surprise people. It’s not hard to know what liberal Democrats are, who they are, what they think, particularly about everything they do is a political calculation.

Because everything they do is oriented toward their agenda. There isn’t any principle behind it, and the second thing is, the fact that they don’t love the military and don’t respect it? Is anybody really surprised by that? I’m just kind of surprised that people are.