RUSH: The Regime “is set to announce another major delay in implementing the Affordable Care Act, easing election pressure on Democrats.” That is the opening line in TheHill.com story. They’re not even bothering to hide the purpose of this. They’re not doing this for the people. What this is… Remember when Obama promised you that you could keep your plan if you like it and keep your doctor?

And then, all of a sudden, you couldn’t, and then everybody started reminding Obama that he lied 23 or 24 times about this? And a powerful lie. I mean, this is something that was deeply personal to people that they believed, and it was never true. And we tried to warn people that he was lying about it, because it was not possible. Your plan that you like was going to be rendered illegal if Obamacare was ever implemented. It was just illegal.

Obama was lying because he wanted to win elections, and he thought you would forget. Anyway, you didn’t forget, you were reminded, and so there was such an outcry that Obama delayed the cancellation of your plans for a year. This calendar year, 2014, you can keep your plan. You’re still illegal. Your plan is still illegal. It’s just that the Regime is not going to pressure you and charge you and fine you or otherwise penalize you.

What this is, is an additional three-year extension of the plan you always thought you were going to be able to keep. TheHill.com reports the Regime “is set to announce another major delay in implementing the Affordable Care Act, easing election pressure on Democrats,” because they forgot something. They forgot something. They have to push back the end of the “fix.” These are substandard plans.

By definition, now, the plan that you like that you now could keep this year… By the way, they brought it back after you lost it? How many of you actually, really got the old plan back? That’s another thing they don’t tell us. Your plan was cancelled. Remember that? You were not allowed to keep it. You had to give it up even though the Regime had promised you.

And then all of a sudden after a bunch of people had been cancelled Obama said, “You know what, you know what? I’m instructing the insurance companies to reactivate those plans. The insurance companies, it’s gonna cost a lot of money.” They were illegal, and we don’t know how many people actually went back and reactivated the plan that they liked that they were promised they could keep, that they had had cancelled.

We don’t know. But if you did, you get to hold on to it for three more years. But they only figured out, they remembered that the law requires insurers to send out cancellation notices 90 days in advance (three months, for those of you in Rio Linda). That means even with Obama’s last delay, the cancellation notices would come out right before the midterm elections this November. 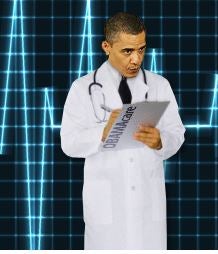 Even extending your plan that was cancelled, that you were promised you could keep, that was taken away from you and then reoffered to you, you could keep it this calendar year, however just for the year, and you would again get a cancellation notice near the end of this one-year extension. The Regime figured out over the weekend that the law requires a 90-day cancellation notice.

That means that the cancellation notices would arrive in people’s in boxes, mailboxes, however they get them, right before the midterm elections. In some cases, my friends, a majority of these cancellation notices would come on the Friday before the Tuesday of the midterm elections. So they had to engage in drastic emergency action here, to just say, “You know what? Screw it. We’re gonna extend these all the way through the 2016 election,” which is the presidential race.

So the implementation of Obamacare is an absolute disastrous joke, and one of the many problems surrounding it was the inability of anybody responsible to make plans based on when what was gonna happen. Businesses, employers, consumers, still nobody knows when this thing is actually gonna fully implement — and, as such, nobody can still make permanent plans, because Obama could decide next week, “You know what? I’m not gonna extend it for three years!”

Or, “I changed may mind, and I’m only gonna extend it for two years.”

Never mind the fact that none of this is legal!

I don’t mean to shout and scare you 25-year-old girls — women. Sorry. I’m told that happens. But I’m not kidding. None of this is legal anyway.

RUSH: Hill.com. The last line from the article is where they admit this delay is to help the Democrats. The Regime’s “decision to pursue another extension was confirmed by insurance sources who predicted a public announcement would be ‘imminent.’ It is unclear how long the extension will be, though one source believed it could last to the end of Obama’s second term, and perhaps beyond,” meaning they might have to even push this past the 2016 election.”

That’s exactly what they’re gonna have to do because of the cancellation notice aspect of this. They can’t have something like that happen right before an election.

RUSH: Ah. Okay. Ezekiel Emanuel has a piece in the New Republic. I now see what this was. “Insurance Companies as We Know Them Are About to Die and Here’s What’s Going to Replace Them.” That piece is from two days ago, and it’s written by Zeke Emanuel, and it’s in the New Republic. So Cookie went and got a sound bite of me in 2009 reminding people that this is what Obamacare was gonna make. It was a See, I Told You So.

I warned you in 2009 that the purpose of Obamacare was to get rid of the insurance companies. The private insurance market was gonna cease to exist. Well, here’s Zeke Emanuel proving once again that I, El Rushbo, knew and always do know what I’m talking about. “Insurance Companies as We Know Them Are About to Die.” Right here, from one of the Obama’s chief Obamacare architects. “Americans hate health insurance companies,” is how it begins.

“They are easy targets for everyone to beat up on.” He goes on. It’s a long piece. But the upshot of it is the last line, “Be prepared to kiss your insurance company good-bye forever.” See, these people believe that you are just like them and that you hate capitalism, and therefore you hate businesses — and that, by extension, you hate your insurance company. You despise them. So you will celebrate and support the Regime as they wipe them out.

That’s what Zeke thinks here. He thinks the Regime’s gonna capitalize! They think they’re gonna celebrate these insurance companies getting creamed, and there’s no question about the fact that their base will indeed applaud that. Their base would be happy if every business was run by the government. It’s not the majority of people in the country, however. But you know what the problem with this is? The Regime really got caught up short.

The Regime, I think, was blindsided when they found out how many people liked what they had. Do you realize what a cutting blow that had to be? Here you’ve got Obama and these Regime guys running around, beating up the health care system, telling everybody how unfair and expensive and unequal it is and mean and all that, and preexisting condition stuff. All the while Obama says, “If you like yours, you can keep it! I mean, if you like it, we’re not gonna be kicking you out of it and so forth.”

But they assumed that you are like them and that you hated your plan, you hated your insurance company, you hated the plan that your boss put you on. Can you imagine how shocked they were when they found out how many millions of people didn’t want any change in what they had? These people, I tell you, folks, are so out to lunch and out of touch, and they don’t care. They’re governing against the will of the people from the moment they assumed office, so nothing matters.