Sterling is not going to make it that easy. By all reports Sterling has cancer. Some people are surprised he’s still alive. That’s according to New York Post page 6. Not only are some people surprised he’s still alive, but other people are mad about it. He has prostate cancer and they’re wondering why it’s taking so long. I’m not kidding you. It is just vicious. Some of the players, some of the Clippers players have not piled on in that way. Doc Rivers said only heard about it yesterday and wouldn’t wish it on anyone. A lot of the Clippers players are expressing sympathy for Sterling. But there are others out there, primarily in the media, when they heard that Sterling has cancer, they kind of smiled. They think it’s just due. We’re learning a lot more than we knew, ladies and gentlemen, about all of the players involved in this mess out here.

“The president of the Los Angeles chapter of the NAACP resigned Thursday in ongoing fallout over racist comments made by the owner of the Clippers basketball team, who had been slated to be honored by the organization with a lifetime achievement award. Citing the scandal over team owner Donald Sterling’s anti-African-American rant on a widely circulated audio recording, Leon Jenkins said in a statement posted on the civil rights organization’s website that he had caused the NAACP ‘negative exposure.’

“‘Please be advised that the legacy, history and reputation of the NAACP is more important to me than the presidency,’ Jenkins wrote. ‘In order to separate the Los Angeles NAACP and the NAACP from the negative exposure I have caused the NAACP, I respectfully resign my position as president of the Los Angeles NAACP.'” Had you heard about this? This is not getting a whole lot of coverage. It’s nowhere near the coverage that Sterling got. 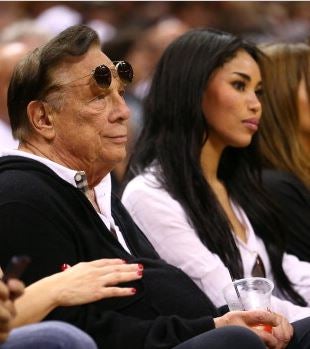 You may be saying, “So what? The guy quits. What’s news about that?” Wait until you hear why, folks. “The NAACP said on Sunday that it would not honor Sterling at its annual dinner in the wake of his comments. But controversy grew over Sterling’s relationship to the Los Angeles chapter, which had honored him before, and to which he had donated money,” and it grew over the news media’s efforts to downplay the NAALCP chapter’s history with Sterling.

“Lorraine C. Miller, the interim national president of the nation’s oldest civil rights organization, said in the same statement that she had accepted Jenkins’s resignation.” Actually, I don’t want to be a nitpicker but the NRA is the nation’s oldest civil rights organization. Now, that’s going to tick some people off. But owning a firearm is a civil right, and it’s even spelled out in the Bill of Rights.

But why did Leon Jenkins quit?

Well, it says here in the AP he “following outrage over a decision he later reversed to give Los Angeles Clippers owner Donald Sterling an award for promoting civil rights.” That’s not why. “Reacting to the announcement, local activist Earl Ofari Hutchinson said the NAACP’s Los Angeles chapter needed to become ‘fully transparent and accountable to its members and community and not to dubious corporate donors,'” like Sterling.

At the end of the story — it’s a story on Leon Jenkins quitting, and you have to read farther than most people ever read in a news story to find out why. I’ve been talking about five minutes and I still haven’t gotten to why! I’ve read every word on purpose. I know you’re out there saying, “Well, what did he do? What did he do?” I’m just illustrating for you what it’s like if you’re reading the news to find out what he did.

Hopefully you’ll not read to the end and find out what he did. You’re just supposed to hear that he quit because of Sterling. But that’s not it. You see, “Jenkins had his own legal problems, which also came into focus this week,” but that have not been talked about. “For years, Jenkins,” who ran the NAALCP LA branch, “had been banned from practicing law in California based on allegations of corruption when he was a young judge in Detroit.”

Detroit, huh? Did you know there was corruption in Detroit?

“In 1988, federal prosecutors charged Jenkins with extortion and racketeering conspiracy, saying he requested and received money, jewelry, a handgun and other gifts to dismiss traffic tickets and other misdemeanors,” when he was a judge in Detroit, and the guy ended up running the NAALCP LA branch.

“While Jenkins was acquitted after two trials, in 1991 the Michigan Supreme Court removed him as a judge. He had ‘systematically and routinely sold his office and his public trust,’ then-Chief Justice Michael Cavanagh said at the time. In April, three judges with California’s State Bar Court denied Jenkins’ most recent request to practice law again.

“The judges lauded Jenkins’ volunteer work with the NAACP and other organizations, but they cited several instances in which they said he misrepresented his finances or other aspects of his personal life.” So he’s gone. He was accepting guns and money other things in order to dismiss traffic tickets as a judge when in Detroit. So, “Civil Rights Leader Resigns, Caught in Scandal Over NBA Team Owner’s Racist Rant”?

I’m sorry, that’s not why he’s gone. Leon Jenkins isn’t gone because of Donald Sterling and his racist rant, but that’s what they want you to believe.