RUSH: Have you heard about the great economic news? I mean, this is the most amazing — I’m sorry, folks, I’m going to have to come up with some new descriptors, new descriptives, because I’m running out of them. Most amazing, incredible, unbelievable, stunning, you name it. The US labor force shrunk by more than 800,000 people in April. For those of you in Rio Linda, that means 800,000 people stopped looking for work or quit working. The labor force participation rate declined or decreased to 62%. That is the lowest it has been since 1978. What that means is only 62% of Americans of working age have job.

The number of Americans not working, but eating and watching television, probably driving and making cell phone calls, 92,594,000. So 92,594,000 Americans are not working. They’re all eating. “Mr. Limbaugh, what’s the big deal about that? We’re a compassionate country. When people don’t have jobs they should be able to eat.” It used to not be that way, Mr. New Castrati. You used to have to work to eat. There’s nothing good here, folks.

But despite all of this, the unemployment rate has plunged from 6.7 to 6.3%. That just doesn’t make any sense. Well, it does, if you know how they calculate the number. They simply don’t count the number of people who have given up trying to find a job. It’s that simple. If you’ve been out of work for four years or longer and you’ve given up looking, you don’t get counted as unemployed. So I don’t know what number, but a large percentage of the 92,594,000 Americans not working is not counted in the unemployment rate.

But despite all this, let me review this now. The US labor force shrank by more than 800,000 in April. The labor force participation rate decreased to 62%. That’s the lowest it’s been since 1978. That means 62% of the people working age have a job. The rest don’t, 92.5 million Americans not working. And the regime claims that 280,000 jobs were created in April, and that the unemployment rate has fallen from 6.7 to 6.3%. Never mind that we were told just yesterday that the new unemployment claims have gone up three weeks in a row and economic growth is one-tenth of 1%.

The regime has even revised up the previous two months’ job numbers by 36,000 jobs. I don’t know how this is possible. We were just told that the first quarter GDP was one-tenth of 1%. None of this adds up. Nobody would suggest that the regime is cooking the books in the run-up to the midterm elections. They would never do that. Except we know that they did do that before the 2012 elections. I mean, that would be like lying about the death of four Americans in order to win an election. They’d never do that. The regime would never lie about how four Americans died just months before an election. They’d never do that, right?

Except that they did.

RUSH: Hey, dude? Hey, dude, where’s my workforce? “Nearly a Million Americans Exited the Labor Pool in April.” That means that taxpayers and people still working have that many more people to support in one fashion or another. “One million people dropped out of the labor force in April. Participation rate plummets to the lowest since 1978.” It’s amazing.

The U-6 number (which is the bureaucratic designation for the number) actually includes those who have given up trying to find a job. That unemployment rate is 12-something, I think I saw. It’s 12.6%, which is closer, obviously, to reality. But it’s even higher than that. Why isn’t it 62%? Fewer and fewer people are working.

And taxes are going up on those who are in order to pay so that those not working can eat. What did I see the other day? Twenty percent of American families don’t have anybody in the family working, and yet we’re told that the economy added jobs? Oh, here’s the AP headline: “US Economy Adds a Strong 288,000 Jobs in April.” Now, how is it possible that the economy added 288,000 jobs?

We were told just yesterday by the AP, “The number of Americans applying for unemployment benefits rose last week to the highest level since February,” and that “[t]he number of people applying for benefits has risen three straight weeks.” Oh, you think the same things can be happening simultaneously?

We could be adding 288,000 jobs while losing all these jobs at the same time? What’s the net number? It can’t possibly be positive. It doesn’t matter. It doesn’t matter. As far as the low-information crowd is concerned, the unemployment rate went down from 6.7% to 6.3%. “Oooh, man! We must be humming! The recovery must finally be taking off right before the elections.”

RUSH: Here as we speak a live joint press conference going on between President Obama and the German Chancellor, Angela Merkel. And before it all began, the president said the following in his opening remarks. 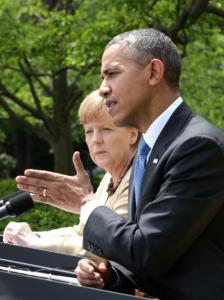 OBAMA: We’ve learned that our businesses created 273,000 new jobs last month. All told, our businesses have now created 9.2 million jobs new jobs over 50 consecutive months of job growth. The grit and determination of the American people are moving us forward. There’s plenty more that Congress should be doing from raising the minimum wage to creating good construction jobs rebuilding America. And I want to work with them wherever I can, but I keep acting on my own wherever I must to make sure every American who works hard has the chance to get ahead.

RUSH: Unbelievable. I wonder if Obama asked her for one of those new S550 coops. It’s a cool looking car if you like two doors coming out in I think September, November, something like that. That’s the kind of thing he would do. All right. “We learned that our business created 273,000 new jobs.” This is for the late night comedians. This is for Yahoo! News. This is for the low information voter because this is all kaka. “We learned our business created 273,000 new jobs. All told our businesses have created 9.2 million jobs over 50 consecutive months of job growth.”

Why do we need to rebuild anything? I thought we were growing gang busters here. Hey, dude, you’re leading the country better than anybody has. We’ve come out of our recession. We’ve been in recovery since 2009. What is this rebuild America stuff? He said, “I want to work with Congress whenever I can, but I will keep acting on my own wherever I must to make sure that every American who works hard has the chance to get ahead.” Once again, dear leader wants every American to credit him whenever anything good happens to them, because only Obama made it possible.

I tell you, this is striking. None of it is true, folks. I’m through even shouting about it. I’m through coming here and saying, “Hey, folks, this guy –” I’m through. It doesn’t matter anymore. Nothing is real anymore. The same thing we were talking about yesterday. Everything’s buzz, PR, whatever you can make people believe is true. If it’s on television, it’s true. People see it on TV, it happened. It’s a dangerous thing.