Obama to Iraq: You’re On Your Own

RUSH: President Barack Obama, shortly before the program began, made some remarks on Iraq before getting on a helicopter and going somewhere. I want to summarize for you, before playing the actual sound bites. I want to tell you what he said. It’s real simple. (impression) “You Iraqis, you’re on your own. We’re not gonna help. Well, we might, but I’m not gonna think about it ’til Monday, and you might not be here by Monday. It’s up to you.”

That’s what he said. He said, “Look, it’s up to them. We’re not sending troops in there. We might do something, but I’m not gonna figure out what it is. I’m not gonna make a decision on what it is until Monday.” He’s not even gonna consider a drone strike until Monday. “But, look, you Iraqis, it’s your problem. It’s up to you.” Here’s the actual couple of sound bites. Here’s the first one.

OBAMA: We will not be sending US troops back into combat in Iraq, but I have asked my national security team to prepare a range of other options that could help support Iraq security forces, and I’ll be reviewing those options in the days ahead. Uh, I do want to be clear, though. This is not solely or even primarily a military challenge. 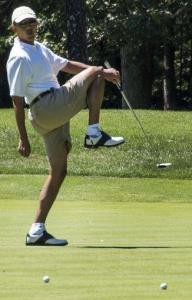 RUSH: That’s right. He’s going to Palm Springs to play golf. That’s what he’s doing. I’m sure there’s a fundraiser out there, too. Who goes to Palm Springs in the middle of the June? Well, he is, and it’s to play golf. But you heard him say there, “I’ve asked my national security team,” which is totally incompetent, by the way, “to prepare a range of other options that could help Iraq, and I’ll be reviewing those options in the days ahead.”

That means: “Monday, when I got back from golf.” But he wants to assure everybody, “This is not solely or even primarily a military challenge.” No, of course not, not when Al-Qaeda is by virtue of the use of force — this is a world governed by it, don’t forget. Ours is a world governed by the use of force, and Al-Qaeda is using force to conquer these cities, but our response is not gonna be military.

None of this is a surprise, by the way.

Here’s the next sound bite…

OBAMA: Any action that we may take to provide assistance to Iraqi security forces has to be joined by a serious and sincere effort by Iraq’s leaders to set aside sectarian differences to promote stability and account for the legitimate interests of all of Iraq’s communities. We can’t do it for them, so this should be a wake-up call. Iraq’s leaders have to demonstrate a willingness to make hard decisions and compromises. The United States will do our part, but understand that ultimately it’s up to the Iraqis as a sovereign nation to solve their problems.

RUSH: Well, why isn’t it up to us, then, to solve our own problems? Why do you insert yourself in every one of our problems? This is a thing that I love to point out. When it comes to Iraq, “Hey, we’re not getting involved! Hey, you’re on your own. Hey, bud, you fix it! Hey, you take care of it. Hey, you handle this. We’re not getting anywhere near that. It’s not our job. It’s not our responsibility. We’ll do our part — which more and more is nothing — but understand: You’re a sovereign nation, and it’s up to you.”

Why doesn’t he treat us this way? He presumes to solve every problem in this country. He presumes to create more problems so he can create then more government solutions for problems in this country. “A lot of sectarian differences, stability, got to account for legitimate interests of all of Iraq’s communities. We can’t do it for ’em.” Right. Well, why do you think you can do it here? But once again, here’s the thing: Why does Iraq matter to us?

Well, you’re gonna get a bunch of different answers on that. There’s a group of people that will say it matters because the consistency of American policy matters, that we went in there to attempt to liberate the place from Saddam Hussein and to establish a democratic outpost, as a beacon of hope for the people of the region, da-da-da-da-da-da.

Therefore the United States, in order to be perceived as trustworthy and willing to honor commitments to allies, has a duty to make sure that Iraq doesn’t fall. That’s one answer. Another answer to why are we there, why is it important, is: We do not want Al-Qaeda establishing a state as a base of operations. That’s what Afghanistan became. The Taliban took over the country of Afghanistan after a civil war.

After we helped the Mujahideen beat back the Soviets, Afghanistan fell. It became a stateless place, ripe for Al-Qaeda to take over, and they did. It was from there that much of 9/11 was planned and executed, money raised and so forth. Not solely, but that was quote/unquote “headquarters.” We don’t want that happening in Iraq. We don’t want Iraq to become the next stateless nation, meaning nation without a government.

That’s just ripe for Al-Qaeda and affiliated partners to go in, take over, and conquer. So pick your reason why it matters, but it does, because we are the ultimate enemy of all these people making moves. Some don’t want to admit it. Some think, “Well, we deserve it. We have made them the enemy.” Ideas run the gamut. But here’s Obama talking about all the different Iraq communities. What he means is the different religions and populations.

But the left loves the word “community.”

So you got the Kurds in the north. You’ve got Shi’a, and you’ve got Sunni, and they’re all at war with one another, and there needs to be a Regime there, needs to be a government. That’s what Al-Qaeda is attempting to obliterate, and it does matter because we’re the ultimate target of all of this. But again, on the other side of this, I guarantee you that Obama’s base is gonna be applauding him when they hear what he said today.

“Oh, yeah! We got no business being there. We never had any business being there. We got the hell out of there and we now we’re gonna go back? Yeah. Not our problem. It’s not our business. Let ’em fix it. We can’t be everywhere in the world,” and he’s gonna be applauded by people on the left. Of course by Monday, who knows what’s gonna be remaining when he gets through playing golf and making up his mind.