RUSH: Yesterday it was NBC News and the Wall Street Journal. Today it’s CBS and the New York Times. In their poll Obama is at 41%. They are burying it just exactly as NBC News did yesterday. The only thing they are finding newsworthy in the poll is — well, listen to Charlie Rose on CBS This Morning describe it.

ROSE: More on the crisis at the Mexican border. A CBS News poll out this morning finds 50% of Americans think children crossing into the US illegally should be sent back to their home countries. Forty-three percent believe those children should be allowed to stay, while waiting for an immigration hearing.

Now, the numbers in the CBS poll: 29% of Americans have a favorable — This is the lead of the CBS poll where Obama is at 41%, okay? “Americans’ views of both political parties are negative and nearly match historic lows, a new CBS News poll reveals. Just 29 percent of Americans have a favorable view of the Republican Party, down four points from May and just one point above the lowest favorability rating for that party recorded in this poll (in June, 2009). While more – 41 percent – have a positive impression of the Democratic Party, this percentage is also just one point above the all-time low for the Democratic Party, reached in November 1994.”

Then you get to the next page and you find a heading: “Obama’s Job Performance —

President Obama’s approval ratings on other key issues remain more negative than positive. Forty percent of Americans approve and 54 percent disapprove –” I’m sorry. It’s not 41, it’s 40. Forty percent approve of Obama. It’s identical to what it is in the NBC News/Wall Street Journal poll. But it’s just the way this is worded. It’s not even newsworthy.

“President Obama’s approval ratings on other key issues remain more negative than positive. Forty percent of Americans approve and 54 percent disapprove of how Mr. Obama is handling the economy.” I guess overall it is 41%. That’s it, folks. I mean that’s the sum total of it.

Then there is AP: “With US Aimed the Wrong Way, Most Want New Leaders.” So here we have CBS today, which does the same thing that NBC did yesterday. We spent a lot of time yesterday talking about how the recent NBC News poll was spun to emphasize Congress’ low approval ratings and everything else rather than report on Obama’s record low numbers. And today we have more of the same from the AP. In fact, the AP doesn’t even mention Obama’s name until the 13th paragraph, and even then they only mention it to say that Congress’ approval rating is even lower than Obama’s.

This is the way this story begins, AP poll, Jennifer Agiesta. “Congress has checked out, and the American people have noticed. Three-quarters of Americans doubt the federal government will address the important problems facing the country this year, according to a new Associated Press-GfK poll. All told, only 28 percent of Americans think the nation is heading in the right direction, the lowest level in August of an election year since 2008. ItÂ’s about on par with 2006, when Democrats took control –“

This is uncanny! It’s on par with 2006 when the Democrats took control. The fact is the Democrats are gonna lose the Senate. It may be a wave election and AP has a poll in which all they can report is how bad Congress is perceived, which is nothing new. Congress is always hated. There’s a poll out, I didn’t even bother to mention this because this is every year. There’s a poll out about how people hate Congress, but 90% of ’em are gonna reelect their own guy. Or maybe not 90, but well over 50 are gonna reelect their own guy. It’s the way it’s always been.

I mean, I’m worked up about this. I know it’s the media. But this is outrageous. Journalistic malpractice, what have you. I mean here we have AP reporting on a poll where Obama’s at a record low in their poll. They don’t mention it. They kind of sneak it in the 13th paragraph. Even then it’s only in reference to how bad Congress is doing which is no big shakes. And then they have to say that the polling data shaking up this year with the anger at Washington is reminiscent of 2006 when the Democrats took control of the House, which they’re going to not do this year, and they’re going to lose the Senate.

So there you have it. CBS News, AP both have polls showing Obama at record lows, as did NBC and the Wall Street Journal yesterday. And they shape the reporting of the poll to tell their readers and viewers just how much people hate Congress and just how low the Republicans are. And in fact AP says, “We may be looking at a replay of 2006 when the Democrats took control of the House.” There’s nobody predicting that! 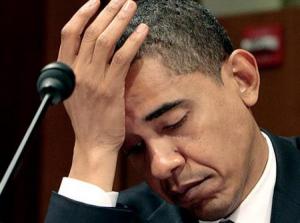 So let’s stick with the audio sound bites. Let’s go to John King last night, CNN. CNN wants to get in on this. Obviously the editors at CNN have seen NBC protect Obama. They saw AP last night when their story posted protecting Obama. And CNN said, “You know what, we gotta get in on this. I mean, we can’t be left out.” You’ve got to hear this. This is Wolf Blitzer last night, The Situation Room, talking to ace correspondent John King about the NBC/Wall Street Journal poll on these major issues. Blitzer said, “Hey, you know, there’s not a whole lot of satisfaction out there, John, among the American people.” Now, get this, my good friends.

KING: He’s essentially in quicksand right now politically. I’m not blaming the president for this. It’s a complicated world and it’s not all his fault, but when people look around the world and then look at home, there’s not much to cheer about right now and we have one president at a time. He’s paying the price. They’re looking for success. They’re looking for results. This is not all the president’s fault, again, but remember he ran promising Washington would work. He was going to change Washington. It doesn’t work. He ran saying George W. Bush had messed up alliances around the world. He was going to fix them and they were going to work. They’re not working. So in some ways, the poll numbers, the people who voted for him, now disappointed in the performance.