He says: “One of the painful things about our time is that those who feel certainty are stupid, and those with any imagination and understanding are filled with doubt and indecision.”

That quote comes from the philosopher Bertrand Russell. Psychological research has now shown he was right.

Let me run through that again. “One of the painful things about our time is that those who feel certainty are stupid –” You know what that means, don’t you? It means somebody that thinks they’re dead right all the time, closed-minded and not open to other ideas and therefore is an idiot. Whereas those with any imagination and understanding, who ought to feel like they’re the smartest people around, are actually filled with doubt and indecision. And he says everything’s reversed here. The stupid think they’re the smart ones, and the smart ones don’t know they’re smart. That’s what Bertrand Russell said.

Now, there are exceptions to this. I, for example, am one who feels certainty, and I ain’t dumb. But Bertrand Russell thinks that people who feel certainty are stupid. Well, I feel certainty, but I’m not dumb. Snerdley feels certainty, and he’s not dumb. So this doesn’t work all the time. But the gist of this is that everybody that thinks they’ve got all the answers is really the idiot and doesn’t know it, and the people who are more capable of acquiring the truth don’t have any confidence. They don’t think they can. 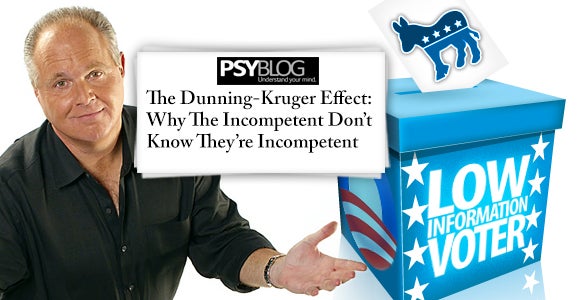 “The Dunning-Kruger effect is the finding that the poorest performers are the least aware of their own incompetence. The effect has been: ‘Â… replicated among undergraduates completing a classroom exam, medical students assessing their interviewing skills, clerks evaluating their performance, and medical lab technicians evaluating their on-the-job expertise.”

Unfortunately, the problem is, incompetent low-information people have been getting that kind of feedback for years, and they didn’t listen to it, or they didn’t notice it. Now, here is an example. How about people who fail exams, they mess up at work, they irritate other people, and they still don’t know that they’re incompetent. The guy never gets a promotion. The guy who’s always irritated. It’s always somebody else’s fault. It’s never the fault of the incompetent, in the incompetent’s minds.

Socrates even once said, “The only true wisdom is to know that you know nothing.”

Therefore, they don’t allow themselves to think positively about themselves because they don’t think what they can do is special. And so these guys think that we are suffering from a major, major inversion. Low-information people tend to overestimate their level of information. They fail to recognize how other people know much more than they do. They fail to recognize just how little they know, even when they’re confronted with it. And, on the other hand, the real talented people, the real accomplished people, oftentimes don’t think it’s any big deal because they think everybody can do or is as good as they are.

And, by the way, Obama, who thinks he’s very talented, he has a knack to it, he told Harry Reid. “It’s a gift, Harry.” Obama’s one of these guys who thinks he’s greater than anybody else and nobody can do what he does. It’s just an interesting little bit of analysis here, folks, ’cause the low-information voter, in many people’s minds, is the key to turning the country around. And they may be, but it may be a lost cause to try to turn ’em into high information. The key may be getting around them somehow.